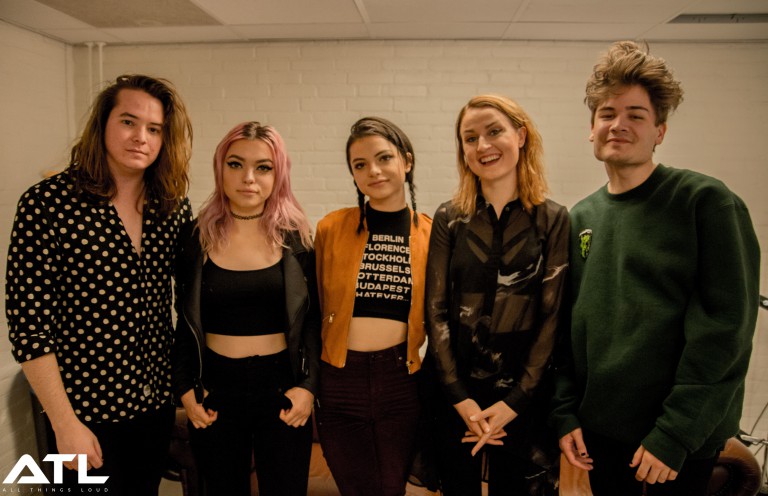 Hey Violet: “We chose to make that musical switch”

Success has been a long time coming for the Rena Lovelis-fronted quintet Hey Violet. Emerging from the alternative undergrowth under the moniker Cherri Bomb a few years back, it eventually became apparent that something needed to change in order to maintain any chance of success or mainstream recognition. A couple of years ago, Lovelis and her band (sister Nia Lovelis on drums, bassist Iain Shipp, guitarist Casey Moreta and keyboardist Miranda Miller) ditched Cherri Bomb’s pop-punk tendencies in favour of a slick, streamlined pop sheen which they demonstrate properly on tomorrow’s debut album From the Outside. We caught up with the whole band ahead of their show at the Paradiso in Amsterdam at the start of May to discuss the new music, songwriting and what’s next for the band.

Hey guys. How are you doing?
Nia: We’re good thanks!

Have you had any time to check out Amsterdam today?
Rena: We’ve only been here for a couple of hours, so unfortunately not.

Casey: Iain and I did get to walk around a bit, though!

You sure got the worst weather for it, haha.
Iain: I actually quite like the weather here, it makes a change from the heat!

You’re releasing debut album From the Outside soon. Can you tell me more about the process which lead up to its release?
Rena: We’ve been working on it for quite a while, actually. I think it’s taken us about a year and a half to finish, and I think a lot of that came from us trying to find our sound throughout the process. If you listen to our first EP you’ll hear that it’s very guitar-driven, but our second EP Brand New Moves was, I think, the start of what we wanted to do musically. Nia and I went to a writing session retreat in Palm Springs, and it shaped a lot of the songs that are now on the album, for example Guys My Age. Where Have You Been All My Night? came from that session too. I thought that the process itself was very organic. I could have started with a cool guitar lick or a nice drum part which someone laid down, or it could have even just started with one lyric or a conversation where someone said something cool.

On the record you worked with a few different producers. What did they each bring to the table from a production point of view?
Rena: Our main producer really helped shape the sound, and he was a really big part of that. He would then send it off to another producer so that it could go to fresh ears. They brought us different perspectives of each song, so there were millions of different opinions on versions of each song. Eventually we would meet in the middle and make a song which satisfied everyone. I feel that it really helped.

Can you tell me a little bit more about the retreat you went on and how a general Hey Violet track comes to life?
Nia: In Palm Springs we sat around all day, and there were six sessions going on at once. You’d have writers in each room, so we would look and see which session we wanted to go to for that day. Like Rena said earlier, it could just come from someone talking about something cool, and that you would start on a piece of conversation which you picked out. Sometimes there were people having jam sessions or sitting by the pool, yet all the time we’d be writing. Even at breakfast people would talk about the things they wanted to use for tracks, and then they would go into another room and do something about it.

As you already said yourself, the new music is quite different from your older work. You’ve ditched the guitars and gone for a more synth-based, groove-laden sound. Was this a conscious decision?
Rena: It kind of unfolded by itself to be honest. We all like very different types of music, and our older music was also very alt rock-y. Now, though, we needed some help streamlining it. This really hit when we started working with one of our producers, and once some songs went in that direction we figured that this was exactly what we needed to do. We chose to make that musical switch.

So what are your personal musical backgrounds like?
Nia: Most of us, except for Casey, grew up in a musical family. How did you get into music, Casey?

Casey: I got a guitar for Christmas and that was that, haha!

Casey: Yeah, classic rock and all of the stuff that my Dad would listen to. Stuff like Van Halen and Led Zeppelin.

Rena: Nia and I grew up with a lot of industrial rock, stuff like Nine Inch Nails and Marilyn Manson for example. Weird shit, to be honest.

Miranda: I grew up as a mess, to be honest. My grandpa was a jazz pianist, and my Mum and Stepdad do theatre. I was in musical theatre too. My Dad also listens to a lot of classic rock, so it was a real mix of everything.

Iain: I was a bit of a mess, too. My Mum was a bit of a new wave fan, so a lot of 80s stuff like Paul Weller and other prolific artists. At the same time I was really into early-2000s indie rock, which was largely being spearheaded by The Strokes. I listen to a ton of that stuff. Eventually I picked up bass and started jamming with what I knew, and that eventually lead to this.

In the past you’ve toured with the likes of 5 Seconds of Summer. Did this shape you as musicians? And if so, how?
Rena: I don’t know, to be honest.

Casey: I think that we were already shaped in a way, actually. We did experience a lot of things on the road with them, and they also gave us a lot of advice.

Rena: We learnt a lot about how to be good performers.

Casey: Yeah, definitely! And also how to deal with interviews and how to talk to people. We can still be quite shy and awkward, but they taught us to just be the band and answer the questions. You know?

Rena: We’ll do that!

So what would be some main takeaways from that whole tour?
Rena: I don’t know. One of the biggest things I learnt from Ash was when I went to San Francisco the day before we had a photoshoot. It was 1 in the morning and he turned to us and asked if we wanted to go and see a secret Guns N Roses show the following day, which was the morning before we had a 9am photoshoot. He was like, “just do it, you’ll make the photoshoot!”

Casey: So we said yes, and we drove all the way up there, saw the show, flew back at 6 in the morning and got absolutely no sleep! We made the shoot, and it was worth it. Ash’s whole “you can make this happen” attitude is something we learnt a lot from.

I want to talk to you about paid meet & greets, a topic which has been discussed a lot lately. What’s your take on them?
Rena: I think they’re okay to be honest. We don’t do them ourselves, but that’s probably because we’re not big enough yet for that.

Miranda: Here’s my argument for people who are against it – if you don’t want it, then don’t pay for it. If people aren’t paying for it then bands will not want to do free meet & greets, but as people are still paying then I think it will just keep going on the way it is.

Rena: Their time is worth something, and it’s valuable. Their status is worth something, and that’s totally okay. It doesn’t necessarily make them better than you, but they have worked hard to get where they are now and they wouldn’t be there without the support of their fans. That’s how they pay for their food, and for the bus they need to travel in when they’re on tour. We could go on forever, but artists just work their asses off and I think it’s perfectly fine to pay to meet them. Right now we’re just reaching out to the first fifty people who buy tickets to our show and giving them the chance to hang out with us.

From the Outside is out tomorrow (16 June). Watch the video for Guys My Age below.