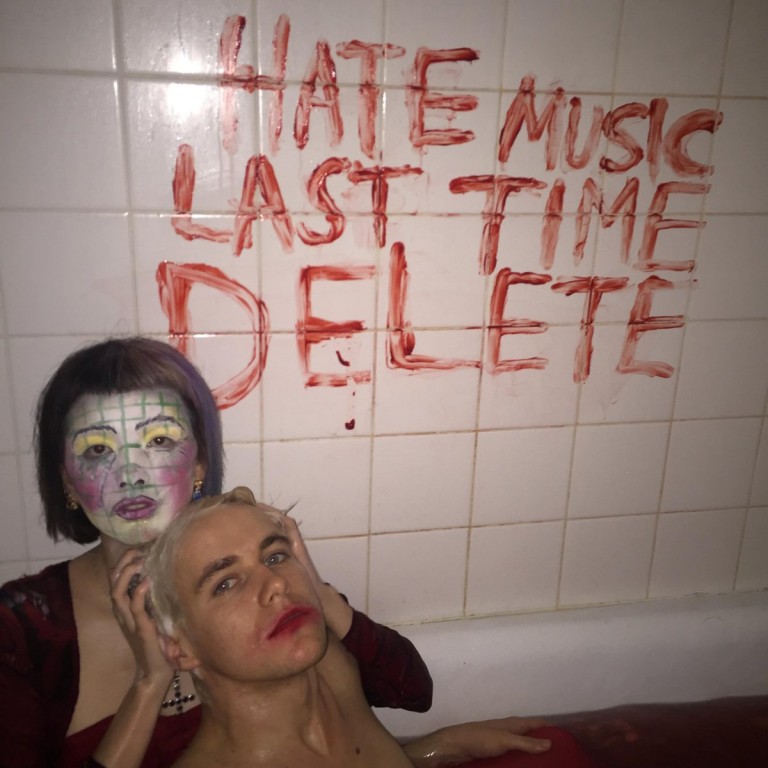 Four songs is an incredibly small window for most artists to get their points across in, which is why it came as quite a surprise to hear that London’s avant garde genrebenders HMLTD would only be putting a quartet of tracks (and an additional remix) on debut EP Hate Music Last Time Delete. For an outfit with so many ideas, opinions and visual quirks it seemed slightly on the low side for an initial offering, but once you dig deeper into the EP’s constructions you’ll come to notice that it’s a very clever choice. That’s because the four proper cuts demonstrate four equally weird but different facets of Henry Spychalski and co.’s work to date.

Lead single Pictures Of You kicks things off in rather demure fashion, something which you wouldn’t have expected given HMLTD’s effervescent and extroverted nature. For the track, the band collaborated with renowned pop producer Justin Tranter, and it’s his footprints which make the biggest mark on the slow-burning alt-pop cut. There’s slick programmed percussion, autotuned vocal harmonies and underlying synths in abundance, all three combining in such a way that it eventually haunts your mind four or five listens in. It’s a song all about self pleasure and loving oneself, its accompanying video having had two incarnations: a soft one, and another which ended up being taken down from PornHub. “I’m addicted to pictures of you, I hold myself through pictures of you” sings Spychalski moodily during the chorus, sounding lustful and sultry in his delivery. It’s this sense of lust and willingness which carries itself through the entire EP, commencing the self love theme on fan favourite Proxy Love. The track has been a part of the band’s live set for a while now, appearing in various incarnations and causing multiple levels of carnage wherever the band go. This is largely down to its incredibly infectious glam rock stomp and Zac’s (most band members choose to abstain from using second names) wistful synths, both of which combine to form a ferocious and infectious whole. “We yearn for love, that’s what we’re dreaming of” bellows Spychalski during Proxy Love’s larger than life chorus, bearing resemblance to a love child between Adam Ant, David Bowie and Boy George. On paper, the aforementioned is a terrible combination; in practice, though, you’ll know exactly what we mean. The final part of Proxy Love sounds like it was made for dancefloors, its percussive beat (courtesy of drummer Achilleas) and anthemic pomp dragging you away from the mundanity of daily life and straight into the sleaziest club South London has to offer.

Both Pictures of You and Proxy Love had seen the light of day pre-EP, which means that this is the point where things start to get interesting: can the band deliver on what remains of their debut offering? In short, yes. Mannequin is by far and large one of HMLTD’s most intriguing tracks, centring heavily on bombastic, dark synths and a grainy glam stomp as Spychalski describes the autonomous parts of his dream woman. “How I wish she would come to life” he ponders on the chorus, his voice complemented in the background by a female counterpart portraying the track’s subject. There are some great guitar lines on Mannequin courtesy of guitarists Duc and James, both of whom intertwine with equal measures of serenity and vigour. Its breakdown puts things in the perspective of the mannequin herself (“How I wish I could come to life“), before Spychalski chimes in with a rally cry which allows to him to express his wildest mannequin-themed desires. It’s as conceptual as things get on Hate Music Last Time Delete, and it’s probably the closest the band have come to carving out a concept thus far. Apple Of My Eye is the fourth and final ‘proper’ track on the EP, and it joins the aforementioned Proxy Love in the ‘fan favourite’ category, having been performed live multiple times (most notably at a sweltering London Calling in Amsterdam). It’s got all the ingredients of a classic HMLTD track (is there such a thing already?), including a hauntingly jangly opening guitar salvo which sounds a lot like something you’d hear in a groggy Brixton underground bar around 3am. “Honey, won’t you be the apple of my eye?” asks Spychalski just before the track well and truly kicks in, hitting you like a battering ram with its in-your-face melody line (a makeshift drop of sorts) and Spychalski’s wailed chants. It’s here that the track maintains a steady pace which essentially serves a breather before the ‘drop’ returns, allowing for moments of glam pop brilliance courtesy of the band’s great interplay. Apple Of My Eye’s studio version comes closer than any other song on the EP in replicating the madness of HMLTD’s schizophrenic live show, capturing that chaos in four short minutes. The EP officially comes to an end on a Soft Cell remix of Proxy Love, however this version is unfortunately not available in some territories, making Apple of the Eye the EP’s proper curtain call. And quite rightly so, because the Soft Cell remix of Proxy Love is merely a watered down (yet groovy) reinterpretation of what’s already a fantastic song. It could have served a much better purpose had it been a B-Side, and not an EP finale (which should have been this).

Over the course of four captivating tracks, HMLTD have managed to show the world as many different sides to their music as is humanly possible, traversing between multiple sonic landscapes in the process. There’s silky smooth pop on Pictures Of You and grandiose glam rock on Proxy Love, not to mention Mannequin‘s hard hitting synths and a sense of reckless abandon which Apple Of My Eye expresses so intricately. All four tracks form an incendiary whole, one which makes the wait for a full HMLTD LP all the more exciting. Many bands have tried sounding like HMLTD by pulling off a similar approach to their music, but it looks like Henry Spychalski and co. are the first band to really hammer home their unique mix of genre and genderbending music (and visual identity) in today’s social media age.

Hate Music Last Time Delete is out now via Sony Music/RCA. Listen to it below.