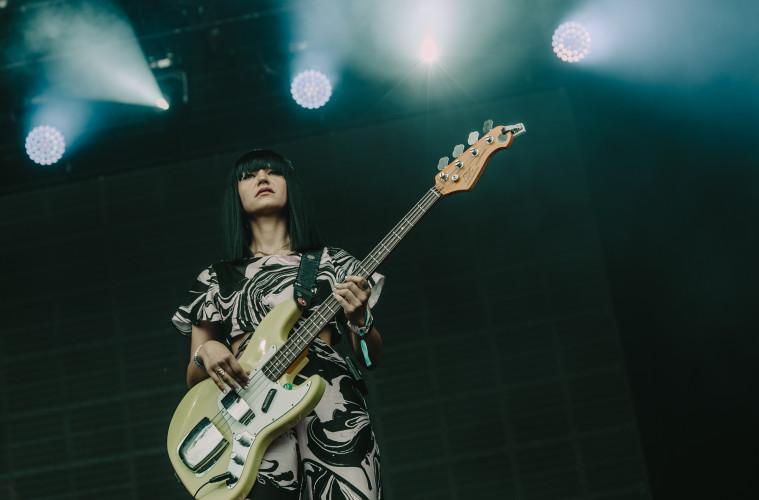 Houston, Beacons of Positivity and Helping Humanity with KHRUANGBIN

Next week, Khruangbin will put out their much anticipated new album Mordechai. It’s an album which takes you on a journey through space, time and humanity, a groove-infused sonic exploration which marks the band’s first proper foray into vocals. Jack Parker called up band members Laura Ochoa and DJ Johnson to discuss the stories which formed Mordechai, as well as Houston culture and how we can all find positivity in music during difficult times.

Hi guys. Mordechai is the new album and it’s brilliant. Can you tell me a little bit more about the time you spent in Texas recording it and the experiences which fuelled it?
Laura: This was the longest time we ever spent writing a record. Part of it was by design, just when we were able to record because of all the touring. We spent a couple of weeks on a farm, and in May 2019 we’d already done all of the bass and drums. We didn’t return until November so we had several months to sit on what we’d made during the time we were on the farm. We went back to the studio between November and January to finish everything.

Your music has always explored a wide range of styles and genres – it’s who you are – but on Mordechai it feels like there’s an extra dimension thanks to the vocals. How did you work on finding a healthy balance between the instrumental and the vocal aspects?
Laura: I think the balance occurred naturally. When we write a song it sometimes has this thing where it just does not need any lyrics. The vocals just don’t fit, but if you write and it feels like something’s missing then vocals do come into play. On this record, and more so than before, I think one factor had an impact. Mark [Speer, guitar] played things a bit differently. Normally he has a melody that’s stretched out and he does what a vocalist would normally do. This time round, he came in with more guitar parts and then he’d go back and say that things would need vocals. I’d say everything happens for a reason, and the album came together quite nicely.

Laura – you tell a story of a man called Mordechai. Your hiking encounter with him led to you filling notebooks full of text which eventually helped form the lyrics. Can you tell me a bit more about the lasting impact he’s had on you as a person?
Laura: I was going through a lot last year. Touring caught up with me and four years really flew by. We went on a ten week tour where we’d visited three continents; so many planes. I was exhausted, and afterwards I met my new friend Mordechai through a friend who saw that I needed someone. Mordechai took me on a hike, and it was such a wholesome day. He listened to me, and at one point we got to the peak of the hike at a waterfall. We jumped off the cliff and into a pool of water, which was so simple and symbolic. I hadn’t had a day like that in a long time. Mordechai’s wife made us a lot of food filled with love. Unlike touring, it triggered something in me which helped me write the album. We named the record after him as a homage to helping fellow human beings.

Had you not encountered Mordechai do you think the album would have taken a completely different path?
Laura: You know, I try not to live in “what if’s”, because they end up becoming “nopes”. If I hadn’t taken that hike I could have been in the same place, but what I do know is that what happened was exactly what was supposed to happen, in the right place and at the right time. For me, Khruangbin records are moments in time because we write and record in such a way. These songs become a capsule in the studio, and with Mordechai this is just where we were at in regards to the more lyrical stuff I had. I also had Mark and DJ’s [Johnson, drums] full support in helping me craft the lyrics and encouraging me to explore these ideas as a musician.

Time (You & I) was – at least by Khruangbin standards – quite a sonic departure. Did it feel like you were taking a big risk putting out a song which sounded quite different to the rest?
DJ: Personally I don’t feel like it was a risk at all. It still sounds like Khruangbin, just through different facets of our sound. I feel like Time (You & I) explores another facet of the many sounds we could come up with. This came from being on the road and listening to a lot of deep disco cuts. Good stuff comes in, and good stuff also comes out.

Laura: It feels like an extension of the thread we followed on People Everywhere (Still Alive) and Evan Finds the Third Room. We listen to disco very regularly. It’s not a thing you can easily emulate in terms of straight up disco, because it had its time and brilliance, but it was nice to bring in those elements.

Pelota is a particularly intriguing track. Can you tell me a bit more about the story behind it?
Laura: Pelota is a fun song about wanting to feel free and finding your way through life. I don’t try to write songs in a way that people can see the stories being told, but even in the lyrics on each of these songs they all mean something different to each person. I had a series of lyrics that I really liked, but it didn’t sound good to sing. I had wild hair one day, like a writer’s block kind of funk, but then I translated the lyrics into Spanish and it sounded super fun. It sounded so much better in Spanish, so we just went for it.

There was of course also an EP with Leon Bridges. Now knowing how well that went down do you envision taking further steps down that kind of collaborative path?
Laura: We have to be open to whatever happens! Khruangbin will always be there, and we’ll always work together, but if other people cross our paths then why not? Collaborating is hard as there’s so much involved, and it has to be the right fit in so many ways.

The album has been described as a celebration of Houston. How did you try to achieve this celebration of such a Western city through music which is so far flung?
DJ: That’s something we talk about a lot. There’s a lot of people in Houston who come here for oil, gas and metal, and Houston is also home to one of the best cancer facilities on the planet. By nature, people travel and they bring their culture with them. It ends up becoming a giant melting point of people, and those influences are prevalent in Houston’s culture. Just by geography you’ll see a Vietnamese restaurant next to an Indian one, and we all just live together. Culture fuses together and the food and music also fuse together. I think that what we do as Khruangbin is just a culmination of the fusions which happen in Houston. I could go out on a limb and say that I don’t think Khruangbin would have happened the same way in any other city.

The COVID-19 pandemic has presented the music industry with plenty of struggles. Did you not feel apprehensive to release Mordechai at such a time?
DJ: It presented its challenges for sure, and we struggled with it. Late March, when the pandemic hit, we looked at each other and wondered what we should do. When we finish an album there’s typically a whole campaign which goes with it; a tour gets planned and all that kind of stuff. It ended up being a huge curveball for us, but we’re in such a unique space and time where we’re lucky that we get to put out this music which we made at a time that the world really needs music. It’s a time that will globally be remembered forever, and I like it has ever happened in world history. We can all look back on this and remember where we were when it happened. If Khruangbin can be one of those memories that provided people with joy then that makes all of us happy. We feel honoured if we’re able to provide people with that moment. Mordechai is out next week Friday, 26 June.