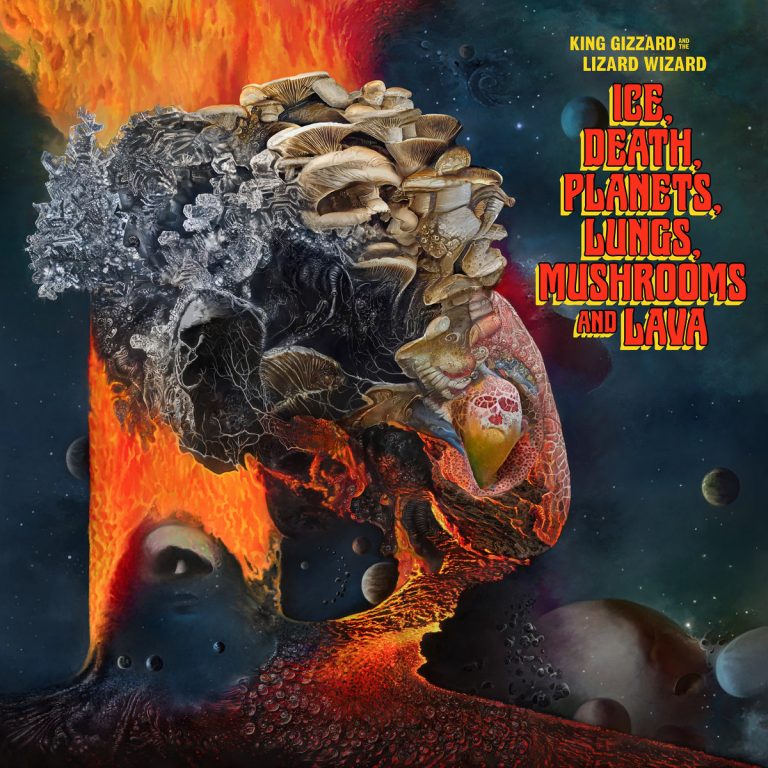 It’s been merely five months since King Gizzard & the Lizard Wizard released their behemoth 20th LP Omnium Gatherum, a double album whose two halves almost serve as mirror images of one another. It marked the end of the first chapter in King Gizzard’s massive book, with the likes of lead single The Dripping Tap looking back on the band’s raucous garage days. Now, not that far into the future, and Stu Mackenzie and co. are gearing off to kick off the next chapter in the incredible story of King Gizzard & the Lizard Wizard. Ice, Death, Planets, Lungs, Mushrooms & Lava is the first of three studio albums the band will release in October, and its seven songs see the band at their most jam-based.

Describing the album’s creative process, band leader Mackenzie explained that they went into the rehearsal room with just three things: song titles, their respective BPM and a different major musical mode attached to each song. Hours of jamming were subsequently cut and pasted down to individual songs, resulting in seven wildly different and sprawling jams. Opener Mycelium is perhaps the happiest song King Gizzard have written to date, utilising Caribbean-esque rhythms and a wistful – almost jolly – fairground keyboard melody. It’s cheerful, something you don’t often get from King Gizzard’s music. There’s bouncy percussion courtesy of drummer Michael Cavanaugh, while Mackenzie shares vocal duties together with multi-instrumentalist Ambrose Kenny-Smith. Together they sing of roots, maggots, rabbits and – of course – mushrooms. Mackenzie wishes to spread himself over the forest floor, as you do. Mycelium follows an initially loose structure born out of jams, much like its six album counterparts. It allows for plenty of improvised moments, with both Mackenzie’s flute and Kenny-Smith’s saxophone making appearances (alongside a…gong? Yes, a mismatched but perfectly placed gong). There’s plenty which can be said about the song structures on this album, but it all boils down to the same thing: it’s jammy. Lead single Ice V will already be more than familiar to fans, its dystopian jazz funk rhythms slowly descending into jangly madness. Ice V is – as per everyone’s favourite free encyclopaedia – ‘a monoclinic crystalline phase of water’. During the song’s latter half, Mackenzie and Kenny-Smith ask “will we survive Ice V?”, adding a darker undertone to the impending doom and despair which was already hinted at on the single’s cover art. The music video (starring guitarist Joey Walker as himself, dancing around the Greek Ydra Island) is a whole new adventure in itself – just take a look and see for yourself.

Magma’s strengths lie in its use of polyrhythms. Mackenzie’s haunting vocal delivery is complemented well by booming percussion and driving bass, all of which underpin a multitude of proggy guitar lines akin to 2017’s Polygondwanaland. There are multiple flourishes or sonic references to that album spread across Magma’s nine minutes, which revel in the jam-based wavelength it operates on. As time passes, the guitar lines become more urgent and the bass line works its way ever more into the forefront – almost as if it wants to enter battle with its six-string counterpart. “Magma / Fire bhagwan / The all, the one and the none” sings Mackenzie as the song – much like Ice V – descends into madness. GI Joe is referenced, before everything comes crashing down. Lava follows suit, initially reeling you in with mystical flute passages, twinkling pianos, ethereal cymbal smashing (it’ll make sense when you hear it). Once all the noise fades around ninety seconds in, we’re left with Cavanaugh’s tribal drumming and Mackenzie’s claim that “death smells like boiled eggs”. He also goes on to describe lava as “sticky like peanut butter”, the lighter undertones in his off-kilter lyrics contrasting with the darker percussive accompaniment. Faint flutes and heavily distorted guitar lines intertwine around the four minute mark as Cavanaugh’s tribal drums become more and more intense. The song’s climax is a beautiful cacophony of chaos spearheaded by cult-like statements from Mackenzie. “The volcano is death / the lava is death / death is life / the lava is life / the serpent is death”, and so it goes.

The title for longest song on the album goes to Hell’s Itch. It doesn’t take long for this song to throw the listener off, with flourishes of saxophone sandwiched between borderline-grimey lyrics. Shedding skin, ripping skin, keratosis (not for the trypophobia-ers among us) and bloody lacerations are all referenced throughout the second verse alone, with Mackenzie’s urge to just scratch that itch becoming more gnarly by the minute (later on, once skin is removed, Mackenzie celebrates the removal of his “bodily condom”). The intensity increases from around six minutes in, with Kenny-Smith’s harmonica and Mackenzie’s flute engaging in a call and response of sorts while bassist Lucas Harwood joins forces with Cavanaugh on drums to provide guitarists Walker and Cook Craig with a solid foundation to riff out on. There’s even room for what sounds like a hammond organ. Hell’s Itch showcases each band member’s best qualities, and although it’s a tad long at 13 minutes it still works within the context of the entire album.

Iron Lung – due as a single next week – is a silky smooth exercise in jazz pop which throws the rulebook out of the window faster than you can say Ice, Death, Planets, Lungs, Mushrooms & Lava. There’s hints of West Coast chill in the way Kenny-Smith soulfully croons the track title, with an enthusiastic “woo!” from Mackenzie making way for phase two of the song: fuzzed out jamming. The little hints of flute and saxophone (a new addition to the band’s sound) add a new dimension to the rhythmic sonic passages on IDPLM&L, with the music’s pre-existing freeform structure enabling the band to have a field day afterwards while overdubbing additional instruments. A hyperactive guitar distorts its way into proceedings four minutes in, sending Iron Lung down a prog-centric rabbit hole from which it doesn’t intend to escape. Gone are the lilting pop sensibilities of the song’s first two minutes; instead we’re being taken on a journey through King Gizzard’s sonic world. As we reach the epicentre of this hellish rabbit hole, we’re greeted by a devilish Kenny-Smith. “Frog breath, steam tent / Neck paralysis” he wails with utmost urgency, eventually making way for the haunting Gliese 710. Iron Lung segues perfectly into this menacing curtain call, a dystopian prog-jazz-fusion cut which you can headbang to even despite its clear lack of metal influence. A common theme on this album has been the build-up of musical intensity only for everything to come crashing down, and on Gliese 710 (named after a star in the Serpens Cauda constellation) King Gizzard do this with gruesome intricacy to the point where you just get lost in sound. The amount of layers which make up Gliese 710 is admirable and definitely commands multiple listens to get a full grasp of what’s going on. Where album opener Mycelium sings of the desire to spread across the forest floor, Gliese 710 sings of disintegrating mushrooms altogether and allowing lava to reign supreme. Ice, Death, Planets, Lungs, Mushrooms & Lava is the start of a new era for King Gizzard & the Lizard Wizard, and if these seven songs are anything to go by then it’s going to be one hell of a ride.