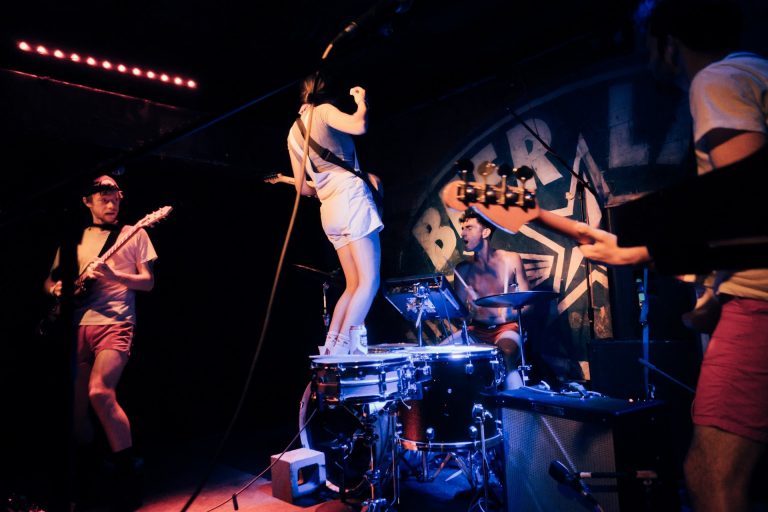 If the boat is a rockin’, don’t come a knockin’ is the saying, but that’s not what Sarah Tudzin wanted as she stood on the V11 stage in Rotterdam. “How weird is it that they’re having some sort of event upstairs and there’s a rock band downstairs. Come join us!”. She’s right, it is a weird setup that V11 have, hosting multiple different events in their spaces on their modestly sized boat. Diners alongside after-work drinkers all above the indie-rock crowd. At the volume illuminati hotties were playing, the fashionably dressed socialisers adjacent were paying attention whether they wanted to or not.

First up for the night was touring guitarist Mal playing a number of songs including some from her In Free Fall EP from last year. Though she played alone, her intricate playing style built on luscious guitar sounds created a fuller sound than you’d expect. With the show starting late for Dutch standards, starting at 21:30, it was a busier than usual crowd for a support act, who was enthralled and showed their appreciation through the classic Dutch silence as the artist plays. The set was enjoyable enough to make me want to check out more, but for a Friday night show with illuminati hotties imminent, I was itching for something more rhythmic. When a song based around an arpeggiated guitar pedal sound was enough to get the crowd moving, I realised I wasn’t alone.

It was only a short while later that illuminati hotties took to the stage. There was almost no reaction to their appearance as they launched right into freequent letdown. I hadn’t even noticed them take their positions. In my defence, the stage was low, the band members short and a Dutch giant was stood in front of me, his curly locks tickling the boat’s ceiling. Not content with opening with just one big hitter, it came as quite a surprise when the opening notes of Pool Hopping sounded out to follow it. Lead single and high point of last year’s Let Me Do One More, it sounded so much more vital live, played with the same bounding energy as you’d expect.

One thing you can’t help noticing about illuminati hotties songs, which becomes especially apparent when played live is that they rarely sit in the same groove for long. The chorus to MMMOOOAAAAAYAYA has the sort of hook that you can’t help but want to move onto, but before it’s barely kicked in, the songs already moved back into its Primus-esque verse. It works on recording, but makes the dancing to it live a lot more confusing. By the time they got to the tempo shifting Sandwich Sharer, some had given up completely, choosing to just kind of shuffle vaguely instead.

The energy continued in its relentlessness as both band and audience bounced around to Knead, making Threatening Each Other re: Capitalism and The Sway a welcome respite. With so many different styles that illuminati hotties write with, you can’t help but feel that if they focused on just one of the many styles they write songs in, they could become so successful than they currently are. So many genres are happily toe-dipped, with a real maturity and panache in each. Instead, there’s something so refreshing about the genre-hopping that they fly through with willful abandon. A real don’t-give-a-fuck attitude that makes them so endearing to those who’ve made the discovery. As we sway to The Sway, it’s hard to believe that the following Joni: LA’s No. 1 Health Goth is by the same song, yet both exist so confidently and accomplished in the styles they were written in.

Sarah’s between-song chat was witty enough to make me laugh numerous times between the songs. Whether it was her surprise at the reverence of the audience, her threats to move to Rotterdam, or confusion at UK audiences hating the places they lived in, you couldn’t help but laugh along to it all. As part of the whole package, it created an atmosphere where when Sarah launched into an “introducing the band” moment in place of Buck Meek’s guest verse on u v v p, you can forgive the corniness of it. Hell, they’ve got a guy called Trucker Tim on drums, who wouldn’t want to introduce him?

The setlist leaned heavily into songs from the last album, but with the quality of tracks on it, that was no problem with me. Throughout the whole genre-shifting, entertaining set, by the time they faked leaving the stage for the encore I thought I’d seen it all, but when the band launched into free ppls, the crowd reacted in a way that I was not expecting. Instantly the politely dancing crowd erupted into a moshpit, as though the realisation that the set was coming to an end meant that they knew this was their last opportunity to get into it. The crowd divided into those smashing into each other and those trying to get away from it all as Sarah climbed up the back of the stage to bark her punk vocal line into the microphone.

It may have been an unexpected end to the set, but it was one more surprising confounding of expectations from someone whose career is based on the very same thing. When it comes to illuminati hotties, expect the unexpected.