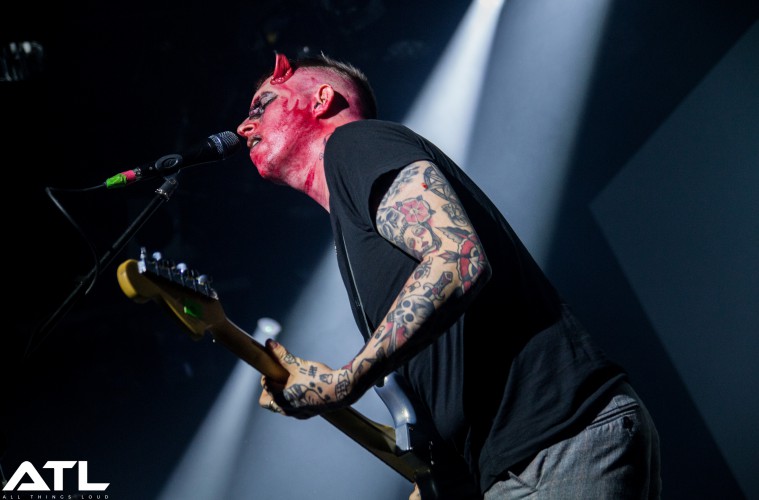 In Discussion With: Slaves

We currently live in a world awash with controversy, shock and despair. It’s a world in which the wrong people manage to get their grasps on power, and a world in which the younger generations need to be guided away from everything that’s wrong with the world. It’s not as easy as it sounds, though, which is why forms of popular media serve as perfect pedestals for exposing flaws and offering hope. Kent duo Slaves are a prime example of a band who aren’t afraid to be brash and honest. It’s put Laurie Vincent and Isaac Holman in a subliminal position of power, one which only enhances their ability to put out a whole host of hard-hitting, punk-laden tracks. We sat down with the pair backstage in Amsterdam ahead of their Halloween show at the Melkweg to discuss new album Take Control, societal flaws and what their parents think of the band.

Hey guys. How are you doing?
Isaac: Good!

Your new album, Take Control, is out now. Can you talk me through the recording process and how you get to the final version of the album?
Laurie: Well, yeah. We always write, like in soundcheck or on the road. After a while we get back into the studio with a body of work and try and do it as quickly as possible. We spent about 2 weeks holed up in the studio, yeah. Mike D produced it. How did you get into contact with him, and what did he bring to the table?
Laurie: He actually got into contact with us. Somebody gave him our first album (Are You Satisfied?) and he really liked it. He got in touch with our label and we ended up meeting one day to talk about music. As soon as we got into the studio with him, it was like, “let’s make the album now!”

What did he bring to the table from a production perspective?
Isaac: He pushed us more than we usually would do. We’re simple songwriters a lot of the time, and he just told us that it wasn’t good enough. He said that we could be better in some places, write more sections and add more to our stuff. He just took us to a new creative level.

And the addition of stuff like skits, was that all Mike D’s idea or did that come from you?
Laurie: That was our idea. You see, we had skits on the last album but we just didn’t choose to call them skits. We had little soundbytes before songs, but this time we decided to section them on and off. You also collaborated with Baxter Dury on this record. How did you get into working with him?
Isaac: We’d known Baxter for a while, and he was talking about us on a 6music show. I can’t remember what happened, but I got into contact with him as Laurie had his number. We were in the studio in London, but we weren’t necessarily writing Slaves stuff; Laurie and I just wanted to write some music. Laurie sent Baxter a text asking if he wanted to hang out with us in the studio, and we’d already had a song written which he was up for jumping on (Steer Clear).

What’s the story behind that track? Because musically it is quite different to a lot of your stuff.
Isaac: Laurie had something done with some bass and a drum machine, like some syncopated beats. You see, we don’t just write heavy music. So, Laurie was playing that stuff and then Baxter turned up. What it’s about? I guess it’s about a partner that drinks too much.

Take Control itself is far more musically varied to your debut. What kind of things spurred you go down this more varied path? And would you put out more stuff like Steer Clear in the future?
Isaac: Yeah, I could imagine doing a whole album of songs like Steer Clear.

Laurie: I had the desire to play guitar differently, and to try new things. We also did things differently this time round, like Isaac also played bass. We were far more creative for Take Control. Did you approach writing Take Control differently to Are You Satisfied?
Laurie: It’s hard to say.

Isaac: I don’t think we approached it differently, we just did what we always do. There’s never really that much thought to it.

In the past you’ve collaborated with various artists, like Chase & Status for example. Are there other artists you would want to work with in the future?
Isaac: Yeah, just anyone. If the time is right and we fancy it then definitely. We’re a collaborative band, so if a song comes along and we’re down then we’ll do it.

You’re taking a host of great young bands out on tour with you this year, like LIFE and Black Honey. Are there any other artists out there that are catching your interest?
Isaac: There’s a band called Shame from the UK. Loads of good stuff to be honest. There’s songs on Take Control, for example Play Dead and Rich Man, which criticize the upper class. What makes you so angry, and what makes you write these songs?
Laurie: Just seeing everyone be so miserable. All the people we grew up with hated their lives; having to go to uni and being told by the ‘system’ that they have to go to school and get a job. It’s just sad to watch everyone else just being filed into line without being able to think for themselves. I guess that’s what just makes me so angry. We sort of bucked the trend, as we don’t really need to do that. We know it’s possible, so it really annoys me to see people who are not living their life.

So where do you think the main problem lies?
Laurie: I think the main problem lies in the UK education system. The way that we’re brought up in the UK doesn’t really set you up for life in a practical sense. Not all of us are going to be scientists, but there’s a lot of focus put on Physics and Chemistry when really I don’t know if that’s more important than learning how to cook food. We also don’t get taught how to do our tax returns, and other actually practical life skills.

Isaac: You go into Maths class and learn about the Pythagoras theorem. What the fuck’s that about?

Laurie: I know that for some people it’s what they’re gonna do in life, but not everybody. I think we need to be inspired from a younger age.

Would you consider Take Control to be a conscious social commentary?
Laurie: I don’t really like to categorize anything too much, but Take Control is basically just our views and our outlooks. Some songs are serious, and some songs are about things about someone who drinks too much. Our songs are always about the things that we see and do. So basically the same as Are You Satisfied?, but on a more mature scale?
Laurie: Yeah.

I just want to end this discussion on a more personal basis. The music is obviously very heavy and punk-based, but what do your family think of the music that you make? I’m curious.
Isaac: My Dad’s really into punk, and I grew up listening to a lot of older music. I’m basically living my Dad’s dream, and he’s living it through me.

Laurie: My parents like the new album. I mean, they can’t not like something that their own son has made, can they? I don’t think they would choose to listen to it if I wasn’t in the band, though.

Isaac: Yeah. My Mum definitely likes stuff like Steer Clear though. She’s like, “ah you should do more softer stuff!” But yeah, she’s proud.

Well thanks a lot for your time!
Isaac: No worries! Take Control is out now. Listen to Consume or Be Consumed (ft. Mike D) below.