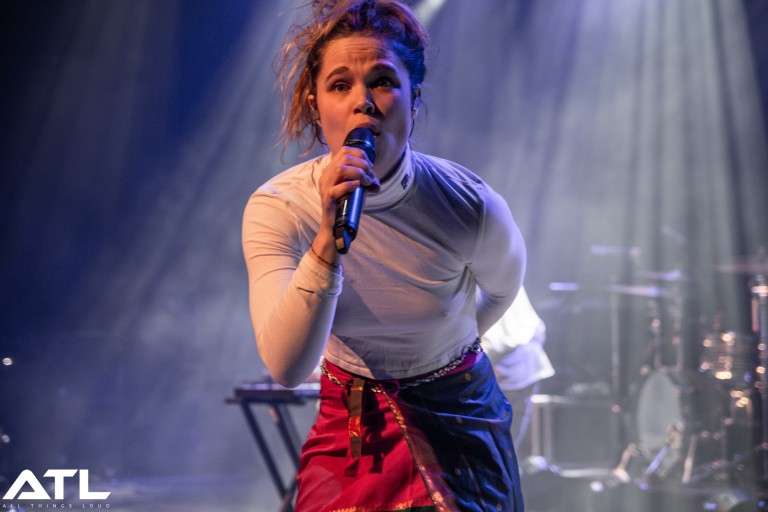 INSIDE EUROSONIC: Off Bloom on Denmark, Touring With Dua Lipa & European Energy

Trio Off Bloom are one of ten winners for this year’s EBBA Award, which traditionally kicks off Eurosonic Noorderslag festival on a yearly basis. We caught up with the entire group (vocalist Mette and producers Alexanders and Mads) to discuss the influence and impact of Scandinavian music, touring with Dua Lipa and the drive which European crowds bring them.

Hey guys. How are you?
Mads: Good yeah!

Is this your first time in Groningen?
Mette: Yes!

What do you think?
Mads: Groningen? I love it!

It’s not too far from Denmark either.
Mads: I don’t know, but it’s a very short flight!

You’re one of this year’s EBBA Award winners. How does that feel?
Mette: Super good.

Mette: I think it’s a really cool prize to win, because it’s for completely new artists and all for breaking down borders.

Mads: Also, the idea of the EU coming together with their cultural experiences is great. Being a part of that is very important in these times.

If you look at previous winners, there are some huge names.
Mads: Oh yeah, absolutely. And if you look at it politically it’s huge.

It’s a very important time for something like this to happen.
Mette: Oh yes.

Denmark is also this year’s focus nation at Eurosonic. What’s the musical climate back home like right now?
Alexander: It’s very exciting. A lot of the people coming up happen to be our mates as well, people who we were making music with when we were teenagers. We just kept at it and now they’re all releasing stuff, which is really cool. People like Vera and Goss, for example. It’s very, very cool, and extremely forward-looking.

Mads: We also all have our own takes on what the future might entail, but it’s all alongside each other in the sense that we are trying to re-discover some values that I think we may have lost somewhere along the way.

I take it we could also expect a debut album from you this year?
Mads: Let’s see what happens, haha. Right now we’re working on releasing a lot of the new songs we’ve been working on, but how we’re going to release it at the end of the day is still a secret.

You spent quite some time on the road last year with Dua Lipa. How has that helped shape your live show?
Mads: A lot! We got a lot of experience in front of humongous crowds, especially here in Holland where we played for between two and five thousand people.

Mette: That was a huge deal.

Mads: We got a lot of experience from that in terms of playing on big stages.

Alexander: We also encountered a level of engagement which we hadn’t really experienced before, like people who were so embracing of us. It was such an amazing experience.

Mads: We played at NorthSide Festival last year, and there were 7,000 people all going fucking mental! It was the first day of the festival and we were the openers, which was really good. But then again, when we came to Denmark with Dua Lipa it was a very chilled crowd. It was a Monday night, though, so it’s hard to tell.

At the moment, Scandinavian music in itself is huge. What do you think it takes for an artist of your calibre to truly stand out amongst the rest?
Alexander: I think you just have to be truthful to whatever you’re doing. We’re inspired by a whole bunch of stuff, but at the end of the day we go into the room and do totally our own thing.

Mads: What we’ve done, and what I think a lot of people don’t do, is to put all your time into it. You have to make 100 bad songs to make one good song, so just keep on making songs.

A bit of trial and error, then?
Mads: Yeah! I mean, we don’t know what the fuck we’re doing anyway.

Mads: We go in there with a vibe. Sometimes it works, and sometimes it doesn’t. We’re not waiting for the inspiration to strike; instead, we let it come to us by being there and letting it find us. If it comes, then we’ll be there sitting in front of our computers with guitars ready to work.

Alexander: This is the thing; for us, it’s all about the music. We try not to think too much about where we position ourselves, it’s just about making good music.

Mads: Good music will always speak louder than anything else.

Mette: And also, I think that we also depend a lot on the people we work with and our friends. The people who come here today, for example. Having a group of people that support each other, like a union, and becoming inspired by that healthy competitiveness is a big thing for us.

Mads: The whole idea that we’re even standing here talking about politics and history, and just having empowering conversations with the people that you love is just the most inspiring thing to us.

Off Bloom will perform at Eurosonic Noorderslag tonight (as part of the EBBA Awards) and tomorrow. Head over to their Facebook page here.