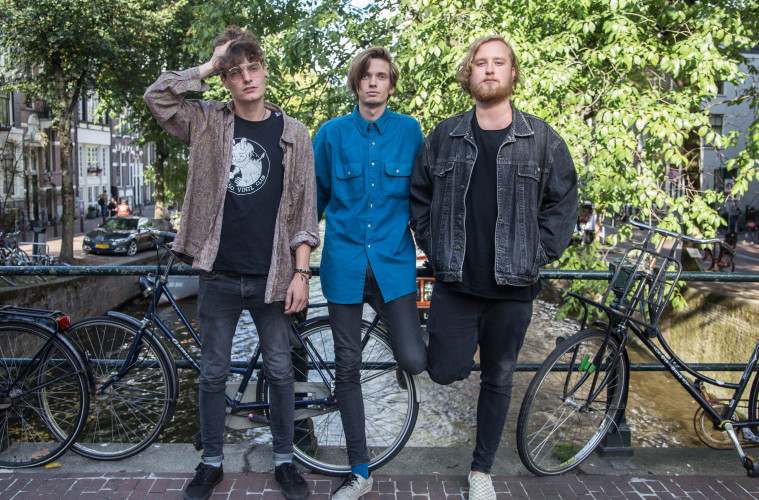 Last week, Dutch outfit Ten Years Today put out their self-titled debut album. It’s an album which, as firsts go, hits you equally hard in the face with its riffs and rhythms as it tugs on your heartstrings with deep and emotional lyrics. All Things Loud sat down with the Groningen trio to dissect all eleven songs on the LP.

Floris (van L, vocals/guitar): Praise the Shit was written a few years ago. I was in a tree or sitting on a rock somewhere and I started playing those three chords. It sounded pretty nice, and the lyrics ended up coming much later when we worked on the album. It’s a bit of an anthem. Imagine this: everything in your life is perfect and absolutely nothing goes wrong; that would be super boring, right? When things go wrong you appreciate the good stuff even more. Life can be pretty pointless, so to complain all the time won’t get you far either. Just enjoy what goes right.

Simon (Bleeker, bass): It was also a bit about how, like, you find an excuse for something else to be even better if shit goes wrong.

Floris: Do Ya‘s a really difficult song to explain properly. So often you have people in the music industry who don’t believe in what you’re doing, and they tend to be older or further in their careers than you. They don’t really care. If you ask them for help they tend to look down on you, and I’m not the kind of person who wants to end up like that. If people need help then give them help, don’t hate.

Matthijs (Louwsma, drums): I have a fun fact about the groove in Do Ya. It’s actually based on Phil Collins’ In the Air Tonight. There’s that huge drum fill which everyone knows, but after that there’s this drum passage which nobody really cares about. This is pretty much what I played on Do Ya.

Simon: I also play tone ladders on this song for the first time, something which I learnt at school. I remember well that it was on Do Ya where I did this.

Floris: Conflicted is the most personal song on the entire album. Musically I find it tough to explain because all I do is pick stuff which sounds nice, but on Conflicted I’m not sure where the sound came from. During the recording of the track we used the snare on Red Hot Chili Peppers’ Under the Bridge as a reference point. We recorded the drums but intentionally avoided the snare, and after that we isolated the snare and recorded just that. We wanted the snare to sound perfect. Lyrically the song is about how you can have so much casual sex with people which actually doesn’t mean anything to anyone at all. And that can suck, because it’s nice to actually feel something with someone.

Floris: If God really exists on this earth, then he’s probably an asshole. This song is our updated version of god who is just a nice guy. He has the same mentality as on Praise the Shit, so don’t complain about everything in life and just enjoy it. You never know if you’ll end up in heaven, hell or someplace else.

Floris: I’d love to record a music video for this song in the town Urk, which is extremely religious. I think it’d be funny.

Simon: So there are 11 songs on our album. I wanted that because I think 10 looks really bad. An uneven number is just ugly to look at.

Floris: That’s what Simon thinks. This song is connected to the following one, Feel, too. Both songs transition into one another and are supposed to be one long song. I recorded them with one guitar and one mic, which feels nice and different.

Floris: Feel is about a guy who’s had enough. He always wants to feel something, and he’s always looking for more. The song is essentially about doing what you can to feel something or feel different. You don’t want to look for love and then wake up next to someone knowing it’s just fake. And the repetition of that. It’s more of a garage track, which is chill. When we recorded the album we’d just toured with Otherkin, and we also listen to a lot of their music. That sort of influenced this. Ty Segall, too. In our music we like to use weird transitions as a means of confusing people, which can be funny. The verse and chorus in Feel are a bit weird, because they attract your attention back to music.

Matthijs: So the album has been ready for quite a while now, almost a year actually. When I first heard the final master I was on my way home and I’d invested all my phone data into listening to it while I travelled. Question Mark was the song I kept finding myself listening to over and over again, and it was also the most fun to record in the studio. It’s a very free-flowing song, and it doesn’t have one specific or solid ‘beat’. There’s lots of room to improvise and bring something to the table.

Floris: Question Mark is, just like Conflicted, quite a calm song. The other songs are overwhelmingly faster and harder, and I like the dynamic which we’ve constructed. Question Mark asks the question: “what the fuck are we doing here?” It ponders what’s good and bad in what we do with life, and if we do it well. It focusses on being extroverted about expressing your doubts and concerns with life.

IF I WERE ME

Floris: This is an interesting song. The beat reminds me a lot of the Red Hot Chili Peppers. It’s about a relationship I had with someone which ended up not being as great as I’d hoped it would be. It just wasn’t that chill anymore. I was drinking a lot, and I ended up falling asleep drunk next to her without even telling her. She never knew. There are other contributing factors to this story which you probably shouldn’t put in the interview. That feeling of falling asleep so intoxicated makes you empty, wondering why you can’t express the feelings you have for someone you really like. There were some things which I just couldn’t say for some reason, and that ended up not being chill for both us. I just wanted to sleep and not think about these things.

Floris: The Boy is a guy who lives in the real world but mainly lives in his own online world. At one point his phone dies and he doesn’t have it anymore. He panics and dies, and the world doesn’t understand why he has no electronics anymore. Musically, and like with the other songs, I write things down and come to the guys with lots of different ideas. The Boy is quite an ADHD-like song, and if I’d done it all myself it would sound like The Mars Volta. It’d be like twelve songs in one, but when the other guys get involved they help reign me in and ‘normalise’ the song.

Simon: See it as a box of Lego which we all use to piece together and form a coherent whole. Like a boat, or something.

Floris: The lyrics are just a product of the many things I write in a book I keep with me all the time. Whenever I think of something I write it down, it doesn’t matter where I am. Sometimes it comes before the song, and sometimes it comes after. I might sit there and write a song and then find it fits well with some lyrics I wrote a few weeks ago. If the music and lyrics feel ‘right’ then I go for it.

Simon: We also have stuff which we work on for a long time but just doesn’t sound like it fits well enough, and then it fades away and we do nothing with it. Other times you get a feeling of, “Boom! This works!” and other times you don’t.

Floris: We had about thirty songs for the album, but we threw pretty much all of those away. There’s a couple of songs we’d like to bring out sometime, but most of them just didn’t fit or needed a lot more work to be of the required quality. The songs we have right now all fit with one another, and so we wouldn’t change the order one bit.

Floris: This is just early Arctic Monkeys! For this song we collected lots of weird sounds to use as some sort of percussive backing. Stuff like bells and whistles.

Simon: We wanted it to sound really freaky, like a freakshow. Haha.

Matthijs: It also had a pretty sick beat. The thing is, Floris produces everything; we come together and work on these ideas which sound pretty crazy and then together we find a way to normalise it so that it doesn’t sound too weird.

Floris: And even then you sometimes need someone else to come along and tell you if it sounds like shit. It’s nice to have that, and these guys do that.

Floris: This one was recorded far earlier than the rest of the album. It’s about being bored with life and not knowing why you’re in the place you are now, a bit like on Praise the Shit. Sometimes you find a childish way to get around that which ends up being a funny way to pass the time, even if it is stupid. Because that song was recorded so long ago you can hear my voice sounding slightly more childlike than usual, and that we as a band had not come very far by then. You can hear that we’re young, which is a nice way of ending the album. It’s rawness suits the message.

Matthijs: It was also written at the height of all those “your mom” jokes, haha.

Simon: It was the answer to every single question!

Ten Years Today’s debut album is out now, and you can stream it below.