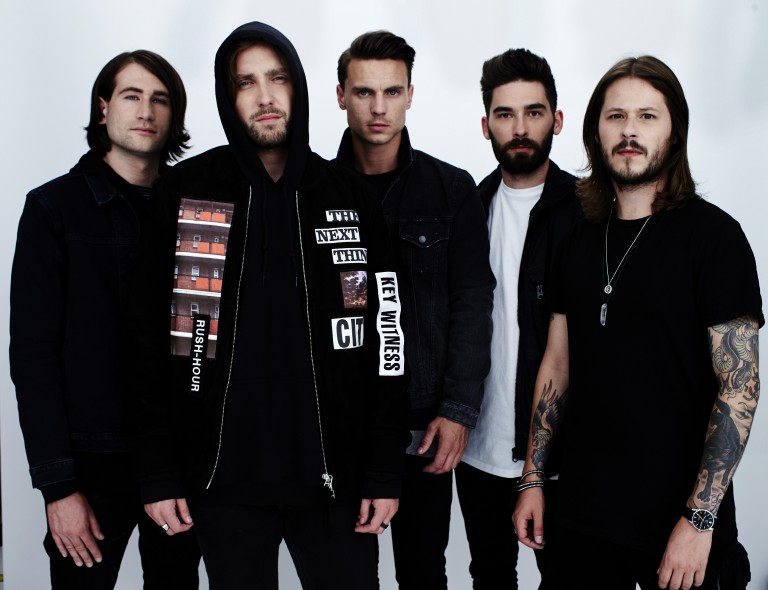 Inside the Mind of You Me At Six’s Max Helyer

You Me at Six are back, and they mean business. That’s apparent from the very moment that new album Night People kicks off with its swaggering title track. The record, produced by Jacquire King in Nashville, is a successful step into the world of polished alt-rock, one which the Surrey band have been nearing with each release. With the likes of Wembley Arena, Alexandra Palace and the o2 Arena long conquered, the band are now setting their sights on topping festival bills the world over, and it certainly wouldn’t be a surprise if they did so before the end of 2017. We called up guitarist Max Helyer to discuss Night People, working with Jacquire King and what he thinks of the ongoing situation surrounding secondary ticketing.

Hey Max! How are you?
I’m great mate, just in my car right now with the Bluetooth on. How about you?

Good thanks. How’s the Night People campaign been so far?
It’s been good so far. It all started in August when we released the title track and did the Reading & Leeds secret sets. It’s been a massive campaign across the world, and we also did a UK/European tour after having been gone for so long. We’re not two weeks away from the release of the record and we’re just very excited for everyone to hear it.

Night People comes out in January, and it follows 2014s Cavalier Youth. How have the last three years panned out for You Me at Six?
Cavalier Youth came out in 2014, and since then we’ve just toured and toured. We played in places that we’d never been to before like Malaysia, and we also returned to the US and Australia. America picked us up on the last album and Room to Breathe did pretty well there. The cycle lasted all the way through into 2015 when we supported The Black Keys and The Prodigy at Isle of Wight Festival. That was a big tick off the bucket list, as Isle of Wight is a very renowned festival. We started to write for Night People almost instantly, as Dan (Flint, drums) built a studio in his own house. We didn’t put a lot of pressure on ourselves, as we wanted to have the time off that we never really had before. We worked from June all the way up until the end of the year, and also recorded and trialled some demos with Ross Orton, who worked on Arctic Monkeys’ AM. It was nice to record songs with other people and see what they sound like. We eventually spoke to Jacquire King in 2016, and after a twenty minute chat in which he understood us and what we wanted to do, he told us that he wanted to produce Night People. That’s crazy coming from a guy who has won three Grammys! We started recording with him in February 2016 at the Blackbird Studios in Nashville, and for us it was a very different way of recording. We split it up into two sections: eight songs in eight weeks starting February, and then back to the UK to write and enhance those songs before completing them in May in Nashville. Heading back to the UK was one of the most beneficial things our band has ever done before, as you don’t usually get much time to work on your songs in a tight studio situation. It was really refreshing. When we went back in May we recorded four more songs and finished the other eight, something which took us a month. For us to have that time and space to go back and work with Jacquire was great, as the two months off helped us in writing songs like Plus One, Brand New and Take on the World. These were songs that we had to really digest and let sit with us.

Jacquire King produced the record, as you just mentioned. What did he bring to the table from a production sense?
The one thing we really noticed is that we recorded it pretty much live for the first time in our careers. We were all in one room together instead of everyone recording their own parts one by one. It felt a lot like how we play live onstage, which is very interesting. We’ve been a band for 10 years now, and if we can’t play live then what kind of band are we? Even if you hear one little mistake – that’s natural. It’s not robotic or fake; in fact, it’s very organic, and Jacquire caught a side of our band that nobody had ever caught before.

Would you work with him again?
Oh yeah, 100% We’re already talking to him about how to get the next one up and running, and that’s before we’ve even released this one!

So what effect did Nashville have on your mindset when recording the record? Particularly compared to the UK or Los Angeles.
I think the difference with Nashville is that it’s a very music oriented city. We were 100% focussed on the record. That’s not to say that we’ve never been so focussed, but when you’re in LA there are more distractions like going out to bars and clubs, whereas in the UK you’re surrounded by family and friends. We wanted to make a fucking great record and we did that in the legendary Blackbird Studios. This record was the only thing on our minds. Kings of Leon even recorded Sex on Fire in this studio!

What are three main takeaways from your time working with Jacquire?
I think the natural side of all playing live together is a massive thing, and definitely the number one takeaway. Secondly, we’ve worked with a team of producers, engineers and mixers which really set the standard of how we look at things musically and how we want to work going forward. Finally, the environment that you work in is really important. We had this thing called Thirsty Thursday’s which allowed us to get to know the people we were working with in a more relaxing atmosphere. Walking into that natural atmosphere, even if it was just once a week, was very important.

In the time since Cavalier Youth came out, You Me at Six have obviously achieved a whole lot. What’s next, and where do you ideally see the band heading in 2017?
The plan for You Me at Six is for people to hear this record and then take it all around the world. There’s already a buzz starting on this record around Europe, America and Australia, and there’s a lot more international awareness too. We want to get out and let people digest this record. It’s the first time in our career that listeners won’t get into the album straight away. I think it’s a real grower which takes a few listens to love. I wouldn’t say the cliché thing about having matured, but I do think we have. We took ourselves out of our comfort zone on this record so that we could prove to everyone that we’re not just a one-trick pony. If we can be an arena band in the UK, then why not in other countries too?

As for the live show, will you be stepping it up from a production perspective? If so, what can we expect?
I think it depends. We don’t want to spunk all the good stuff straight away. We don’t want to use all the great tricks immediately either, because we want to do stuff that we haven’t done before. If you’re a fan of You Me at Six we want to make it exciting for you to keep coming back, regardless of if you’ve seen us three or eleven times. Production-wise we’ll be doing new stuff, and as for song choices we’ll also be trying to play songs that fans haven’t heard for a while and stuff we’ve never played live before. We’re not going to play all of the new songs straight away, as we want fans to get used to them on the record first.

There’s been a lot of media attention surrounding the secondary ticket market, something which Josh (Franceschi, vocals) has shed light on too. What is your take on the situation?
If you look at someone like Barack Obama right now, who’s just banned ticket bots, you’ll realize that it’s a worldwide problem. People are trying to adapt to this whole situation right now, and the industry has really gone too far. It’s not for anybody else apart for the fans. People out there want to go and see a live show, but then they spend 60-80 pounds on something which shouldn’t cost more than 30. There aren’t enough artists speaking out about this right now, but we tried to do something with our Dr Martens show at the Dingwalls recently. If you look at illegal downloading ten years ago, you’ll see a similar trend. I’m not saying that Spotify was or is the solution, but it did help. If people stand up for their cause and maybe not go to live shows then the industry suffers and bands can’t play shows – something will definitely need to be done. It’s about educating people too, though. This isn’t a witch hunt for the people responsible, it’s about making everything fair again. It’s not fair for the fans, and it’s also not fair for people in the industry as outsiders line their pockets.

Indeed. I just want to round off by focussing on something else now: what was your standout record of 2016?
I mean, it could go two ways. Earlier on in the year I would say that Iggy Pop’s Post Pop Depression stood out for me. Iggy is an icon, and what he does on this record reminds me a lot of his Berlin work. Having Josh Homme and Matt Helders on it too is just amazing. My favourite album of the year, though, is Childish Gambino’s Awaken My Love. It only came out two weeks ago, but I already love it so much. You can listen to an album once and know it will stay with you, but I’m already listening to this record at least twice a day. It’s just not boring. He used to be an essential hip hop artist, but now he’s pushed the boat out and become a funky, almost soulful artist. He’s an exciting musician to listen to, and I think this is one of those records that I’ll still be listening to in 5-10 years’ time. It’s the 20th of December today, and I’m still a huge fan of this record more than two weeks after it came out. I want to champion new music, and I think that this album can change my life.

And how about new bands?
It’s definitely been an exciting time for music in general right now. There’s a lot of artists coming out with great styles of music. Black Foxxes are really exciting, as are The Amazons. They have a debut album coming out next year, and I think they’re the kind of band who could do what Blossoms did this year. I think Dua Lipa could also be very big, and Georgia Smith reminds me of Amy Winehouse. There’s a lack of that going on, and I’m a big champion of finding new music.

Night People is out now. Listen to Heavy Soul below, and purchase the record here.