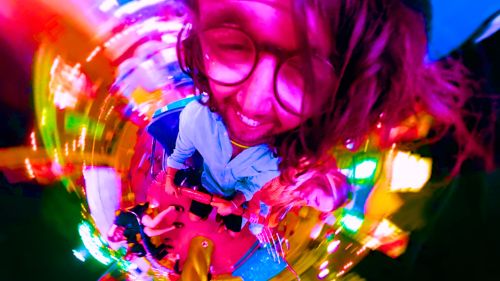 Hi Jack. Good to speak to you again, how’s life been treating you since we last spoke in January 2021?
I mean a lot has changed – I’m engaged now, and I have a house which is very rock and roll.

Night Gnomes is your new album. What’s different this time round?
I think this time round we tried to not make a lo-fi record, and in doing so unintentionally created something in between lo-fi and what we ended up doing. We’re trying to get better at recording, improving our techniques and getting rid of all the bad habits we’ve gathered over the years. We changed the way we approached a lot of audio stuff which we’d been doing wrong; we used different mics, we spaced out the instrumentation more so that ideas could sound clearer. This removed the clutter and let songs like Sherbert Straws have just that one idea which progresses throughout the track, adding little bits here and there. We had a lot of stuff which we threw away, and I felt bad for it. Then I realised that it’s because I’d been listening to these songs hundreds of times, forgetting that fans will be hearing this idea for the first time.

On first listen Bubblegum Infinity stood out. How did this track come about and why’d you deem it a suitable single?
For me that was the most structured track on the album. Originally it was a song I had written for Royal Blood in a writing session, but I don’t know if they ever heard it. It was nice writing a song in that mindset, it felt different. Then my manager said I should keep it, so I went full Porn Crumpets on it! It has that nice fairy-like existence, and for me it was playful enough to put on the album. It gave the album some glitter and gloss.

The album has a hard-to-describe sheen to it; pop sensibilities abound. Was this a conscious decision going into the process?
Yeah, definitely. I think we all wanted to make something that was more accessible than the old eleven minute long jams we did in the past. This was us learning how to write songs again, something I think I’d forgotten how to do. In older bands pre-Crumpets it was always verse-chorus-verse, and I was trying to get rid of that structure in Crumpets. After a couple of our albums, however, I decided I wanted to write songs again and hone in on how to get a flow going. Starting at point A, ending somewhere different and having a nice journey along the way.

Do you think you maybe got carried away when writing last year’s concept album SHYGA: The Sunlight Mound?
Haha, yes. For sure! That was too much concept in a way.

I read that you had to fight to keep the harmonica in Night Gnomes, and listening back it works well. Do you see yourself whipping it out more often in the future?
Yeah! That was a good fight. We talked about this the other day on our way back from Sydney. The guys were like, “yeah, I can’t imagine that song without the harmonica now”.

There’s also very quick turnaround time here from your last record, SHYGA: The Sunlight Mound. Would you call yourself a workaholic?
I mean, I was recording right before this interview. I just have no friends, so it’s much easier to make music without getting distracted.

Last year you told me you wanted SHYGA to be a “really good rock album”. You couldn’t answer it back then – but how do you feel placing this statement opposite Night Gnomes?
There’s definitely parts of it which I really enjoy, and the songwriting was some of the best I’d done. If I’d used the recording techniques of Night Gnomes on SHYGA then it would have been a better record. I got carried away with stuff like pitch shifting, and going too far in places where the guitar could have just stayed raw. It’s nice to reflect on the things I didn’t like about SHYGA, as I changed those things for Night Gnomes. The things I don’t like about Night Gnomes I’ll change for the next album as well; everyone can see the trial and error and that we’re improving. Either that or people will think we’re heading into some sort of oblivious state.

As ever, the visuals on the record are striking. Run me through the album’s visual identity.
So on this album we teamed up with Ben Giles again. He did the art for our album And Now for the Whatchamacallit (2019). He took this nice collage approach which looks like Hieronymous Bosch. Stuff like sticking bits and pieces onto a gargoyle’s face and legs, which really made it feel like a Night Gnomes-esque world. I saw the art before the album was written and I really wanted to tailor the music to the visuals. We wrote songs with that in mind. I love Ben’s artwork and I love the feeling of holding onto a physical album. I’ve recently been relistening to Plastic Beach by Gorillaz; that album cover is so cool. Plastic Beach is the first stop if you want to nail a concept album.

You’ll be back in Europe later this year. Are there any cities you’re particularly keen on revisiting?
I don’t think we’re doing Amsterdam this time which is crazy! We’re doing Groningen, which I don’t think we’ve done before. We’re also doing Maastricht – my memory is good! Nijmegen was really cool last time; we stayed in this really interesting house out in the fields. It was nice to have some peace, and the venue we played in was also super small. It’ll be cool to go back there, the whole of The Netherlands is amazing.

You mentioned earlier that before we spoke you were busy recording. How does Night Gnomes set you up for what comes next?
Man, that question always trumps me. I’m deep in this world now but I don’t think I would mind going somewhere different and perhaps getting some Ableton lessons! The live set we’ve been working on is also so good; I keep forgetting that we’re gonna finally play a lot of these new songs live. Album-wise I wouldn’t mind trying to evolve our sound a bit, perhaps evolving some production techniques and instruments. Maybe we could go left-field and do a Prodigy-ish record? Haha. Night Gnomes is out now.