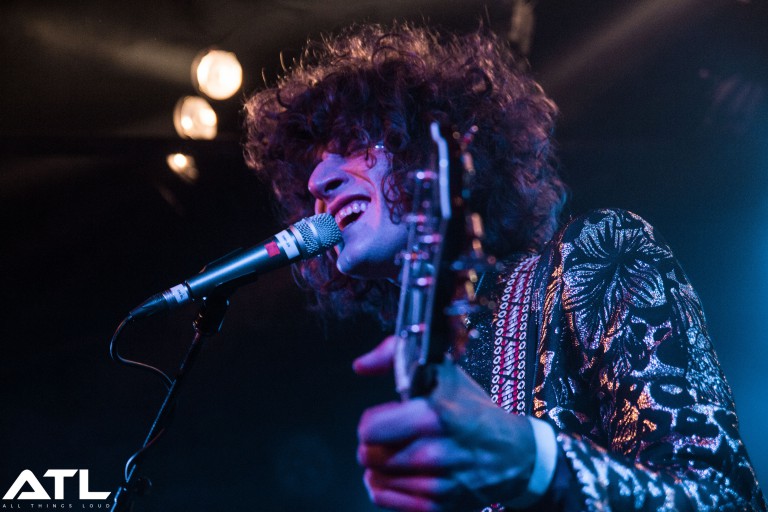 Inside the World of Temples’ New Album, Volcano

Kettering quartet Temples’ new album Volcano has been a long time coming, following 2014 debut album Sun Structures in cementing James Bagshaw and co.’s reputation as one of the world’s best psychedelic groups out there by a country mile. The album explores a wide palette of musical influences, some of which are more implicit than others. Despite this, though, the record is quintessentially Temples and sounds like the next logical step in their musical progression. We caught up with bassist Thomas Warmsley to dive nto the world of Volcano, psychedelia anno 2017 and his personal role as bassist.

Hey Thomas. Your new record Volcano comes out soon, 3 years after your debut Sun Structures. Can you tell me more about how the last three years have panned out for you?
One thing I can say is that time passes very quickly. I think that, since starting with Temples, we’ve continually played shows. This has taken up most of the last three years, right up until October 2017 which was then we shifted focus to thinking about what we’d do next. We spent the last year or so focussing more on the studio side of things and being creative again in that environment. It’s been strange to go from fully focussed on touring to being creative again, and then switching back to thinking about touring Volcano.

I just want to focus on the conception of Volcano. Can you tell me more about the recording process?
It was more a less a similar process to Sun Structures. We produced and recorded it ourselves again, which felt necessary really. We felt like we still had a lot to prove in terms of what we wanted to do next with our sound and songwriting. We briefly considered working with someone else, but just the nature of how we record and write tends to put just us at the controls, and not someone else. It was thus very similar, and something which we were very comfortable with, which is important when you re-establish what you want to do. Then you have to determine where you want to take your songwriting and creativity, and that is probably the hardest part. There were various things which felt natural to do, so the way that Volcano sounds as a record kind of happened very naturally over the course of that year.

Volcano goes down a more synth-based direction. What spurred you on to head down this direction?
I think it’s more of a direct record soundwise. There’s probably less reliance on it sounding like a reference to the golden era of sound, which has more traditional sounding production. I think it kind of blurs the lines a little more regarding which influences we had. I’d like to think that we came more into our own on Volcano. It, again, seemed like a natural thing to do, shedding the reverb and echo off our skin and doing something more direct and instantaneous. This largely comes from playing live for 18 months and the instant gratification you get from doing so. And to go into extremes: If a song has a very synthetic meaning to it lyrically, then we also go all out with the synths.

It’s also a grander record. Did you work on it with the bigger stages and large festivals in mind?
I mean, we had a higher fidelity type of sound in mind. Sun Structures was more focussed and narrower, which is largely the idea behind the sounds on that record, to be very authentic and sound very much like the golden era of recording. This time round we wanted a full spectrum of sound with as much low end detail as there was high end detail, and that definitely comes from feeling the music in your chest onstage.

So did you go into the whole process with a specific end result in mind?
There was no end result, objective or prospect other than to progress. Two third of the way through the record we knew where it was going; we just had a collection of songs with no real idea or sound in mind at first. That very much developed naturally as we collected more and more songs, which is a really large difference between Volcano and Sun Structures. There’s such a strong sonic influence on Sun Structures, so that was one of the biggest differences this time round regarding the process. You’re not quite sure which direction it’ll go or where you’ll end, and there’s a certain risk or chance involved in that. It’s something very exciting and slightly nerve-wracking. We always knew that we’d rediscover it along the way, though.

The psychedelic scene is currently blossoming. Do you keep much of an eye on what’s going on around you?
Yeah, absolutely! There’s so many great bands, and it feels like that whole group of bands is collectively playing all these festivals around the world. When you look at the three or four years of progression from since it first started forming, it’ll be interesting to see where most of them will go next. We’re always very appreciative and honoured that people consider us to be part of that collective, but I think that on Volcano we also wanted to let people discover a little more about what Temples is. It’s important to never define a band by one song or record, and Volcano is our first footprint in a new direction.

Exactly. So, what’s been standing out within that collective?
Umm, all sorts. Our label mates King Gizzard & the Lizard Wizard seem to only go from strength to strength; they’re a fountain of creativity and ideas which is always impressive to see at work. The new Thee Oh Sees album is amazing too; it’s great to see bands who you consider as veterans of that collective still putting out great music.

I just want to focus on you as a bassist. Where do your main influences lie?
To be honest, I never considered myself as a proper bass player, in terms of expertise and virtuosity. Musically there’s definitely influences that I draw from, though. I’ve always had a multi-instrumentalist mentality. John Paul Jones can quite happily switch between bass/organ/piano and he brought that sense of being a multi-instrumentalist to the table. Mike Rutherford did a similar thing in Genesis, but even things like Rory Williams’ bass player are always very fascinating. Chris Squire from YES too. He creates very unashamedly colourful bass sounds, and does more than just play the notes. In Temples we like to keep the rhythm section moving, changing and evolving throughout the song.

Three years ago, I spoke to Sam (Toms, drummer) about the decline of guitar bands. He said that there will always be a thirst for guitar music. What’s your take on the ‘guitar music’ climate right now?
I mean, I suppose it’s very much on the periphery, guitar music. That’s not a bad place to be really, the underdog within a wider musical spectrum. It’s kind of happily existing at the moment, and I think that isn’t in a bad place at all really. 2017 will be a very good year for guitar bands.

Thanks for your time!
No problem!

Volcano comes out tomorrow via Heavenly Recordings. Watch the new video for Strange or Be Forgotten below.