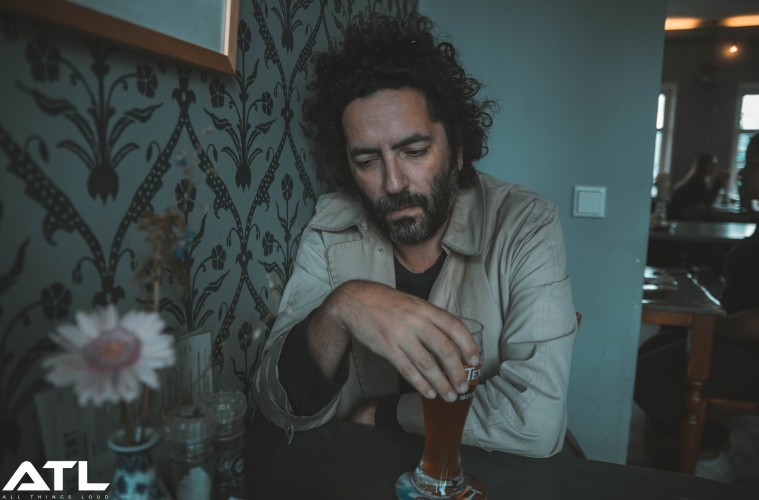 Inside the World of Destroyer’s Dan Bejar

Dan Bejar is a curious character. As the main man behind Destroyer, he’s spent the last two decades bringing out an eclectic mixture of thought-provoking and hyper-poetic indie rock. ‘Indie rock’ should be treated as a large umbrella term, though, because Bejar’s musical output of late has flirted with minimalistic electro soul, brass-laden bombast and much more else. We sat down with Bejar to discuss Destroyer’s introverted new album Ken on a gloomy promo day in Amsterdam.

Hey Dan. How are you doing?
I’m doing good, thank you.

Could you outline for me the transitional period between the end of Poison Season’s campaign, and the start of Ken’s?
It’s kind of hard to demarcate those things, y’know. I do know that at some point I started playing the guitar, which is something I hadn’t done in eight or nine years. I decided I wanted to try and write on the guitar again. Then I did a solo tour of the US, which was just me by myself. I’d do a lot of writing back in the hotel room every night, just starting up my computer and seeing where it takes me. Somewhere around that moment I took a year-long break from touring, which I thought was necessary to do. I don’t know if that has anything to do with a change of process or how the songs came about, but that’s kind of how it went down.

Poison Season came out in 2015, and a lot has changed in the world since then. Has this had any reflection on the way you approached Ken?
Nope, not really. This is still the world that we’re living in. There’s, like, a certain bleakness to Ken but I don’t think it stands out in comparison to other Destroyer records. There’s always been some melancholic aspect to all of them. I tend to avoid reacting to events in the outside world.

Would you call it a studio record, or one which is more aimed towards the live stage?
I never really tend to think about those things. I know how Ken was made, and that was without a bunch of guys there in the room with me recording themselves. It was pieced together in a more robotic way; everyone who wanted to play on it came in and played on it. It wasn’t the aim of Ken to replicate a full live band recording, whereas with Poison Season we were just focussed on putting a sound together which we all liked and wanted to play together. Was there a reason why you approached it differently this time round?
Maybe, I don’t know. I think that I had a certain sound in my head, and that this wasn’t the sound of what we’d been doing in the past. I wanted to have very short, direct songs, which was a big change from the last few Destroyer records. I wanted a certain vibe which was different from what the Destroyer band did onstage.

Black Mountain’s Josh Wells produced the record. What did he bring to the table from a production sense? As opposed to also just being a member of your live band.
He played at least half of the music that you hear, so that’s something. All the songs were built from basic, machinelike patterns and moments of sequencing, which is all in his kind of world. He was giving me a lot of freedom, which was nice because I’ve never worked with a producer who’s given me so much freedom. He would also help me build a vision for how I’d want to go further with a song, which really helped.

Do you see this as an approach you’d like to take in the future?
I’m not really good at thinking about the future, but I really enjoyed it. Mainly because I like watching things be drastically transformed or be rendered totally unrecognisable, which is what happened to at least half of the songs on the album when I was in the studio.

In your press release you discuss The Wild Ones. Can you elaborate a bit more on your connection with that?
I feel bad that I ever wrote that, as I was pressured into addressing the meaning behind the album title. In America, I think that people are really scared of Barbie & Ken associations, which is something that I don’t think has been an issue at all since I started talking about the record. I feel foolish, because I would never have discussed an album title in that way using a comparison. I do believe the record suits the name, but I was thinking more of the power of language and how that can transform something in your mind through song. When I discovered the connection between The Wild Ones and its original title of Ken, things really opened up and changed for me. The word just stuck with me for some reason.

In the past, you’ve discussed how elements of the Thatcher era shaped your musical upbringing. How much has your approach to discovering and listening to music in recent years changed?
It’s been thirty years since I was a teenager, and that is a very, very long time. I would like to think that there are some similarities, but I do think that there’s been some big changes since I was a teenager first getting into music as an obsessive fan, and a shift in that pattern since I started seeing myself as someone who makes record. That is a bit different, because I don’t feel like I’m as much of a consumer anymore given my position. I don’t know much about the technological side of things, as I don’t have a good grip on that.

Is there anything you’ve discovered lately which you’ve quite liked?
Umm, there’s one particular song but it’s not coming to my mind. I don’t know, I feel like I’m some sort of weird grey space, and that’s not good because there’s nothing new that I like. I generally get a lot of energy from coming across new things, so I’m in trouble on that one as I need something good to come along.

There’s one lyric on Ken which particularly stood out to me, and that’s “Good things come to those who wait forever” on Ivory Coast. Could you tell me more about the thought process behind that?
I just wanted a line that sounded good at the end of the song, the kind of line which could be repeated continuously. There’s this trance-like way to how Ivory Coast builds up, which gave me a pretty hypnotic feeling through the rhythm section. I coupled that with these down and out-sounding vocals, and “good things come to those who wait forever” is a pointless peptalk because it’s implying that good things come anyway.

Ken’s your twelfth studio album.
No way, really? I thought we were on eleven! I’m pretty sure this is the twelfth one!
Oh wow, I always thought it was eleven. Twelve is too many.

Haha. With that in mind – how do you maintain the drive to continuously put out music after all these years?
I don’t know. I just like doing it so I do it. I don’t understand not doing it, like going away for a while and then coming back. There’s something compulsive about it, and it’s all that I can think about. I have hobbies, I have my family, and I also love film. I think about that in a way which is just as passionate as how I think about music. Yeah, I’m just driven to do it.

Do you ever find yourself trying to incorporate elements of film you admire into the visual side of Destroyer? What about Ken in particular?
I feel like that sums up the whole Destroyer project, to be honest. Starting twenty years ago, and even lyrically, I worked on trying to get my influences from away from the music back into the music. The same, to an extent, goes for books. I try and write and say things which stand out in the songs. There weren’t any films which had an impact on Ken, though. It’s not as filmic as compared to Poison Season, for example, where the songs are big and have ebb and flow. The songs on Ken are very direct, short blasts.

Very binary.
Yeah, that’s a very good way of putting it. A lot of the writing on Ken seems to be the most binary writing I’ve ever done.

Ken is out now via Merge/Dead Oceans. Stream it below.