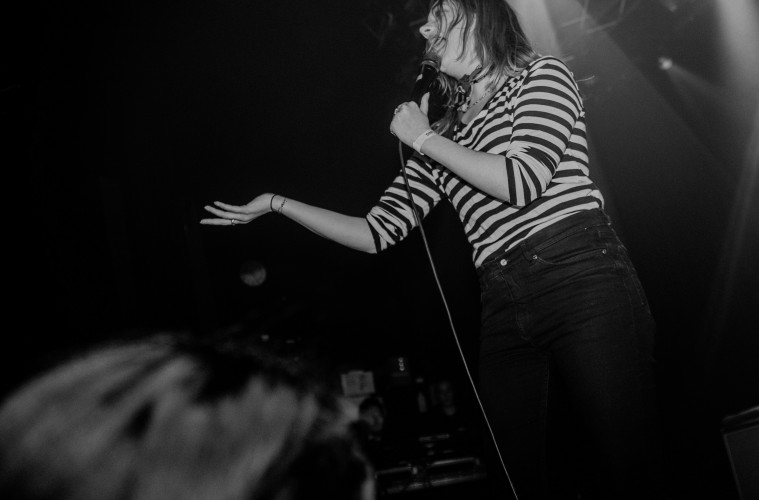 MARMOZETS IN UTRECHT, by Jack Parker

Inside the World of Marmozets’ Becca Macintyre

Up until the tail-end of 2017, we hadn’t heard an awful lot from Yorkshire’s Marmozets in quite some time. Having rounded up the campaign surrounding successful debut album The Weird and Wonderful prematurely due to a horrific knee injury sustained by vocalist Becca Macintyre, the band were forced to step back into the shadows for as long as necessary. After a period of tough rehabilitation and collective re-discovery, the band returned this year on the pummelling Knowing What You Know Now, an album which ticked all the right boxes and forced the Bingley outfit right back into the midst of public consciousness. Earlier this week, the band stopped off at Utrecht’s industrial De Helling for a sold-out headline show. We sat down with frontwoman Macintyre earlier that day to discuss new music, rehabilitating and moving forward.

Hey Becca. How are you?
Great, I’m glad to be back in Holland.

How was your UK tour?
Pretty gnarly, actually! The crowds were insane, and we couldn’t have asked for much more in regards to their responses, really. There was such a family vibe, and everybody went absolutely schizo. You can’t ask for much more.

You also took on Brussels and Paris last week. How much of a difference do you notice between UK and European crowds?
So this is what we were discussing last night, because the energy is still exactly the same. There’s just less people, which is bizarre because less people normally means less energy. It’s usually people who are just quickly checking out a band or heard about it from a friend. It was on fire in Paris last night, though. Everyone went mental! Haha. Does it ever make you all feel somewhat disheartened when you go from playing huge crowds to suddenly standing in front of a handful of people?
No, not at all.

Your new album, Knowing What You Know Now, follows on the back of a debut album campaign which ended quite abruptly for you with your knee injury. Can you tell me a little bit more about the timeline you followed this time round and how everything panned out?
Thankfully it did pan out! It was a bit of a struggle because I got quite heavily depressed due to the knees. I was largely bed-bound and feeling as though I couldn’t do it anymore, which is mad. That’s what does happen when you’re put in such a place. I’m used to being busy and used to being on the road, so to then be told that I had to still was quite mind-boggling. I got through it fine, and I was at home a lot of the time once I started rehabilitating. I was learning to walk again daily, and I was going to physio. At one point, I thought to myself that I couldn’t be going up and down on crutches all the time; I used to live in Yorkshire but now I’m down south with my mum, stepdad and the kids. I couldn’t carry on with my crutches and suitcases all the time, so we had a moment where I told the rest of the band to come down to Norwich so that we could crack on with new music. We’d already been writing a load of stuff, but we just weren’t feeling it enough. We wrote New Religion in Norwich, and that was it.

That was the spark.
Yeah, that! It’s funny, because the Bottomley boys weren’t quite happy being in Norwich as we’d taken them out of their comfort zone. I couldn’t walk, though! Haha.

You were out of your comfort zone anyway!
Yeah, exactly! It’s just weird how you have to wait and go through so much crap to get the material that you need, because even if you are in a great place the material doesn’t always come. You need to go through events and situations before you have something solid to write about again.

Were you also rehabilitating during the recording process itself?
Yeah. My knees were still getting stronger and stronger, but it was an amazing process to record the album with Gil Norton in Monmouth, Wales. It was in the middle of nowhere, which was so great in helping us become reconnected with one another again.

What did Gil bring to the table from a production perspective?
He’s just not an arsehole. He’s a humble guy, and he’s got kids himself so he knows what family’s about and knows how to work with us. We’re still young, and we’re not these grown adults with houses and kids yet. Everything we do is still a lot of fun, but we’re working towards that point where it all becomes far more serious. We had a great time with Gil, and the process was mental. We didn’t drive Gil too crazy! Haha.

When you started working on the record with Gil, did you find yourself setting any goals or pinpointing an end aim?
We already had all the sounds in our heads, and we knew exactly how we wanted each song to sound, so it was just a case of us negotiating our ways through the whole process and getting to the end of it. You can see in the way Gil worked with Pixies that he really has his own methods and working techniques. Normally, we’d be in a room together recording and watching everyone do their parts. Like, we’d have to all be there to make sure that it all goes good. You know what I mean? Gil was different, though. He’d bring you in one at a time and pick different times for you to come in, like 9am or midnight. This was a really relaxed way of doing it, as he’d get different versions of things. We’d then put all the best bits together.

Do you think Gil got the best out of you?
Absolutely. On The Weird and Wonderful it was just all of us in a room jamming songs, but on Knowing What You Know Now we worked with a laptop and things really changed. Technology has really changed, so we can also just use GarageBand to get demos down and stuff. Half the time, we hadn’t even played a whole song together because we’d mainly be working on our ideas. The first time we’d play it all together would be in the studio.

With most artists, you tend to find that there’s a lot of anticipation, hype and pressure between the first and second albums. Did you find yourselves under much pressure to live up to your debut?
Yeah, for sure. You have your whole life to write your first album, but as soon as that’s out the way you have a label, management and all sorts of different factors which contribute. They’re like, “we’re doing a five-album contract deal and this is your second album” and that makes you think, “shit, they see a lot of potential in us”. We’re made to write a lot, and it’s a bit like living on the edge. You’re always on that edge, living in the unexpected. You don’t know what is gonna come, or when it will come.

Was it more label pressure or personal pressure?
The label was really good in how they handled it, they told us to take our time even though we didn’t really have an awful lot of it. We smashed it! We managed to do it, and now we’re in a really good place because of it.

I just want to touch back on that family influence within the band, something you’ve undoubtedly had to talk about often. As years go by, do you find the inter-band dynamic change a lot? If at all, especially considering the impact of such a dynamic industry.
You look out for each other more. The way the industry is means that you all become much closer. This world’s not the kind for you to live how you like and be what you want in that way. You really do have to give a shit about yourself and other people in the industry in order to make things work and be the best. It’s going to be horrible, it’s going to be gruelling. People get sick, and people die! It’s as simple as that. People die if they aren’t mentally ready and if others don’t look out for them or challenge them in life. Shit just hits the fan, and we’ve learnt from a young age to just be like that because it’s what works best for us.

I just want to talk a little about the musical climate in Britain right now. What’s it like, and what’s going well?
That whole psychedelic music vibe is coming back. Everyone is trying to look like a hippie and act like one; I feel like that’s kind of how it is. It’s involved in so many different things these days; there’s also so many vegetarians and vegans around today. I’m a vegetarian myself and have been for a long time. It’s not like I’m going to start writing psychedelic shit though, do you know what I mean?

A trippy Marmozets song would be pretty interesting!
We might end up like that, who knows! Haha. Do what The Beatles did! If we do it good, then fair dos!

Exactly! Thanks a lot for your time, and good luck!
Thank you!

Knowing What You Know Now is out now. Stream it below.