An Insight Into the Dark History Behind Rammstein’s Deutschland

What would Rammstein be without a shitload of controversy? Definitely not the band they are today, it seems. Earlier this week, the German metal titans emerged with a shocking teaser for new single Deutschland which depicted a re-enactment of the Holocaust and Jewish hanging. The contextless clip quickly spread like wildfire, instilling fear and anger into right-leaning media who spoke out against the band with little hesitation. Just like the band had hoped, of course. The initial thirty second teaser clip only formed out part of the end credits in Deutschland’s video, and it’s one of the least shocking things you’ll witness over the course of the single’s ten minute run length. The Specter Berlin-directed short film is as close to a big budget cinematic masterpiece as you’ll find, and it explores the violent and often right wing-leaning history of Germany in grotesque detail. The violence attached to nationalism, if you will. Join us as we look at each and every key aspect of German history represented in the video. 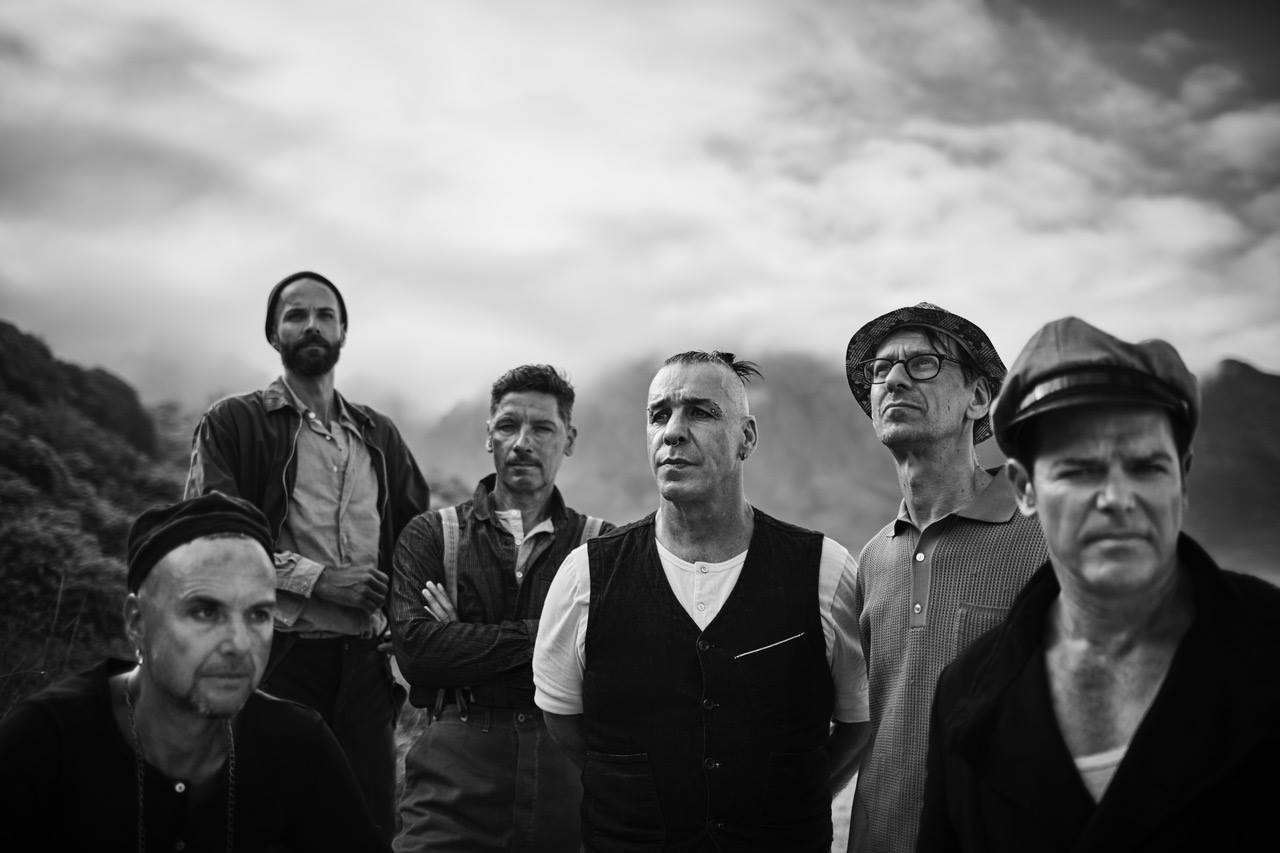 The video starts with a bleak look at both Ancient Rome and Middle Ages, featuring actress Ruby Commey severing the head of Rammstein frontman-cum-legionary Till Lindemann as the band – dressed as legionaries – watch on. It pays some homage to Arminius, who died in AD 21 (Battle of the Teutoburg Forest, anyone?). Aforementioned Commey goes on to play numerous roles in the video, serving as a key focal point of Germany’s historical representation – she is, after all, the personification of Germania. The inclusion of the Middle Ages – despite red, futuristic light beams – indicates a longstanding tradition of violence, politically implied or not. If you look carefully during one scene three minutes in, you’ll even spot the statue of what seems to be Martin Luther. The Middle Ages appear throughout the video in slightly more grim detail, including a gnarly scene where the band – dressed as monks – eat intestines from Commey’s body on a wooden table whilst four rich generals sip from goblets in a cutscene prior. A perfect representation of the class divide and Ablasshandel. Under the table? A see-through compartment featuring BDSM-clad victims representative of the hell feared by clerics above the table. Every Rammstein video needs a little bit of sex, so why not cloak it in metaphor?

During an early moment in the video, we see the six band members walk away from a burning Hindenburg Zeppelin. LZ129 Hindenburg was a German airship which crashed in 1937 in New Jersey, resulting in 36 deaths and 62 survivors. It took off in Frankfurt for its – unfortunately – final flight, eventually marking the end of the Zeppelin era due to a loss of public confidence in the airship industry. It marked a key moment in German air travel, which is likely why the band have chosen its tragic demise as a key introduction to Deutschland, massive explosions and all.

Now, this is the element which really stirred some controversy ahead of Deutschland’s release. Throughout the video, we see depictions of the Holocaust through a hanging ceremony involving four band members dressed in blue and white striped clothing. One wears the Star of David, with a homosexuality badge worn by another band member. During the Second World War, these respecitvely indicated that you were Jewish and that you were homosexual, if not both. One of the four men is hung, something the video depicts quite graphically as the bricks supporting his feet are kicked away. There’s also a book burning scene, as well as other hints of Nazi history spread throughout (such as the V-2 Rocket).

Although not explicitly obvious, the video’s prison scene seems to be a metaphorical look at the violent side of communist Germany. The band are prisoners here, their cell escorts often interrupted by beatings and inmate fighting. The beatings include what’s very clearly a red baton, another potential dig at communism. Either that, or the baton is a symbol for how badly German citizens had it during the Great Depression. What’s interesting here is that an ‘old’ prison fight scene features modern day riot police. A reference to the modern day re-emergence of far-out political ideologies distancing themselves from the past, perhaps? We’re probably clutching at straws here, but it’s possible.

Back in May 1987 (on International Worker’s Day), the Berlin district of Kreuzberg experienced its infamous May Day protests and riots, which were in lieu of growing tensions between the left and right following a census boycott. It culminated in more than a full day of rioting, with police even having to withdraw in East Kreuzberg for 36 hours before staging a counterattack. These attacks are marked annually now with – largely – peaceful protests which stand as a point of reference for one of Berlin’s most important historical events. It could also refer to the Rostock-Lichtenhagen riots, though. The band will appear in Rostock this summer, after all…

We don’t actually see modern day Germany in the video for Deutschland. The closest it gets to this is when we see a glimpse of the Rote Armee Fraktion, a faction who became prominent during the Cold War. With Lindemann supposedly dressed as Ulrike Meinhof, the band attempt to battle off riot police with Commey in their grasp, making a successful escape. It’s a pretty captivating fight scene, despite the image of Lindemann in a leather skirt and wig adding comedic elements to what is an overwhelmingly dark and startling video. The Cold War took place while Germany was still divided into East and West, and this division is something we see in Rammstein’s representation of the DDR throughout the video.

Throughout the video we see the band dressed as astronauts – a possible reference to Sigmund Jähn, the first German in space – exploring an extraterrestrial landscape. We not only see hints of the future, though: we also see a bunch of batshit crazy stuff going on which is impossible to place in any given era. Commey gives birth to a wolf at one point, surrounded by the band dressed in obscure white gowns. Earlier on, we see the astronauts caress her pregnant belly. There are also red beams visible throughout the entire video, which may hint at communism as an overarching concept. It doesn’t matter which era you look at, there’s a red beam somewhere, and it’s got to mean something.

Deutschland is Rammstein’s first new single in ten years, and it’s taken from new album Rammstein, due 17 May via Universal. Watch the official video for the powerhouse track below. With thanks to Marc Prodanovic.