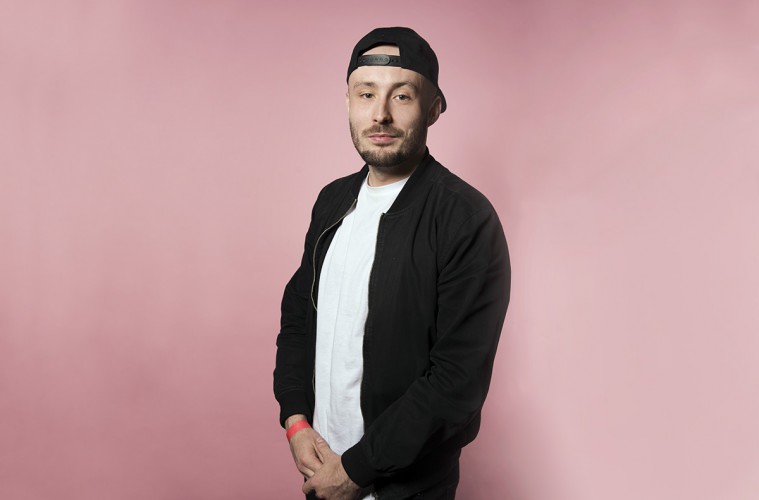 INTERVIEW: As It Is’ Patrick Foley on Dogs, New Music, the Final Warped Tour & Diving Into the Back Catalogue

Last week, pop punkers As It Is rounded off their European tour with a sweaty show at the Dynamo in Eindhoven. Earlier that day, Maui Vindevogel sat down with drummer Patrick Foley for a light-hearted chat about dogs, the final edition of the Vans Warped Tour and how touring in the United States poses plenty of challenges for a band like As It Is. How is the European tour going so far?
I think we’ve all collectively said that this has by far been the best tour we’ve been on. It’s the most fun we’ve all had on tour. We’ve definitely seen a lot of improvement from the previous times that we’ve toured in Europe, as it’s always been quite a difficult market for us and the pop-punk genre in general. It was always difficult to come back and play to sort of tens of people, but we took some tours with State Champs and Neck Deep, support tours with those guys, and I’m really noticing they were very beneficial. Now we’ve come back on our headline tour now and, well, we don’t want to leave Europe. That’s how good the shows are!

Well, the UK is technically still in Europe so you’re not really leaving.
We still are I guess, yeah. Yeah, okay, mainland Europe. I mean places like Germany in particular, where they are renowned for their love for heavier music. I mean, I remember our first ever European tour with Silverstein. Post-hardcore, heavy bands, some of the bigger shows in Europe I’ve seen, but our response wasn’t fantastic ‘cause they seem to have this love of heavier music, which is great but difficult for us as a more melodic band touring in mainland Europe. But now, by taking the right tours, maybe there’s been a shift in what people like at the moment. We seem to be doing pretty well.

Maybe it’s a combination of both.
Yeah, I’ll accept that. That’s fine.

On this tour you’re also playing older songs like Often and Bitter Broken Me. How’s that going?
It’s been daunting, quite scary actually, to play songs that we literally haven’t played for four years. And sometimes, talking on behalf of everyone in the band, I guess there’s some songs that we thought we’d never play again just ‘cause we didn’t think they were good enough to play live. But I think we all collectively came together thinking about this headline tour and making it, like, a special experience for the fans. Like, you know what? We might not enjoy playing these older songs as much as we do the newer stuff, but I feel like it creates a better experience, a show experience for those who come out to see us. Plus, we need to fill out an hour set so we needed to put some extra songs in.

But it’s nice that you did it.
Yeah! You know, if I’m being honest, I actually enjoy playing those older songs. I think they’re great.

You’re also on the last ever edition of Vans Warped Tour. How does that feel?
That’s amazing. Like, you look at the bigger bands of today that started on Vans Warped Tour. A lot of bands in this scene, and even scenes outside of pop-punk, started their careers with the Vans Warped Tour. And we did it in 2015, which was the first ever Warped Tour for us. It was an unbelievable experience. It’s one of the hardest tours that we’ve done, yet also one of the most satisfying and rewarding.

Why one of the hardest?
First of all, there’s the weather. It is consistently boiling hot. There’s very limited cover, and it’s all outdoors so the weather makes anything difficult. You don’t want to leave your bus or your bandwagon, you want to stay with the air conditioning. Also, I think the great thing about Warped Tour is the fact that there’s no hierarchy amongst bands. Everyone gets a thirty minute set, everyone’s set time changes every day, there’s no headliner, there’s no opening band, all the bands are put into the same pool. So you really have to work hard when you’re out there, because there’s a lot of bands competing for the same response. I mean, we were getting up at 7am and hustling the lines, selling our CD’s, getting in the faces of new fans. Because there’s so many bands on the tour, fans can only spend their time across a certain amount of bands and you can easily get swallowed up by that thought. I mean, yeah, we worked hard but it’s a great tour, I love the fact that there’s such a community aspect. After the day’s done, everyone would sort of chill out by the buses and stuff, and have some beers and food. It’s one of the hardest, yet one of the most rewarding, and I’m so excited to be part of the last one. It means a lot.

Last time, we spoke with Ben and Patty and they mentioned there was new music in the works. How is that going so far?
Well, we’ve just finished recording our third album! We actually finished it on the Saturday before we flew to Europe for this tour. We were out in Austin, TX recording with a guy called Machine. He had done heavier bands before, so that was definitely an experience. We’ve actually got an album and some extras recorded and done. I need to make sure that I don’t give anything away, but we should be having some new stuff out very soon. We’re excited to get it out. Now for a very important question. Are you a cat or dog person?
Oh, hands down dog! Yes!

What’s your favourite dog?
That’s a difficult question. I’d say I’ve always liked German Shepherds, but I like a bigger dog. Our first ever dog was a Border Collie, so Collies, German Shepherds, Labradors, anything that size. My sister actually got a smaller dog which I hated to begin with, but I’ve now grown to love it.

How can you hate a dog? How does one do that?
Yeah, that sounds kind of harsh. I mean maybe I didn’t love her as much as I did our older dog, but I’m definitely a bigger dog sort of person. I just can’t trust cats, they’re not very loyal. Well, my experience is that they’re not very loyal and they’re very independent. I don’t know, I just feel more attached to dogs. Cats scare me a little bit.

Scare you? Okay
A little bit yeah, they unnerve me.

You should meet my cats, they’re very nice. I have five.
Five? Wow, that’s a cat overload, I feel for you.

Okay. What would your ultimate festival lineup look like?
To be fair, this latest Warped Tour line-up isn’t far from it. I mean, bringing back older bands like Underøath, The Used and anything post-hardcore that we grew up listening to, which we drew an awful lot of influence on for this third record that we’re about to put out. I think I’m gonna be cliché and say it would be headlined by someone like Blink-182 ‘cause I’ve only seen them once. They definitely did a lot for me as a young musician growing up. So Blink would headline it. This is so, so unconventional but I would have a lot of heavier post-hardcore bands mixed in with a load of American country bands. Like, I’m majorly into artists like Sam Hunt and people like that now. It would be this weird mishmash of pop punk, post hardcore and country.

It could work yeah.
I mean, no one’s done it yet.

You should get on that idea.
Yeah. After this, I’m gonna go and try and figure out some artists that I put together. And if there’s a niche in the market, I might do it. Well, I’ll see.

You never know, if As It Is doesn’t work out in the end, you can do that.
Yeah, put own my own post-hardcore, pop-punk country festival. It rolls off the tongue.

I have one more question. If you had one superpower, what would it be?
I always used to pick the ability to be invisible, but I think that’s kind of creepy. The only reason why being that I’m kind of a nosy person. I like to listen to other people’s like business, so I guess I would like to do that for the wrong reasons. Maybe the ability to…oh I don’t know. What would yours be? I think invisibility or mind reading.
But that’s also creepy, isn’t it?

Yeah and I think it would be very, err, *makes gesture of head exploding*
Yeah, it’s dangerous. Euhm, okay, the ability to turn back time. I mean, I try and live my life so I don’t want to turn back time but sometimes it would be best if you were able to go back to a particular time and just say, “this is maybe how I should’ve dealt with this”. And also to relive good experiences, that’d be cool.

But if you turn back time to change bad things, wouldn’t you be a different person now? That’s a deep question. It’s true. I guess my actions have made me who I am today. Oh, now you’ve made me think about that. Can I leave that answer pending?

Yes you can, we’ll get back to that next time.
Yes! Definitely. Let me have time to philosophically think about that one.

Okay, that’s good! Thank you so much!
Thank you!

As It Is’ third album is due this year.