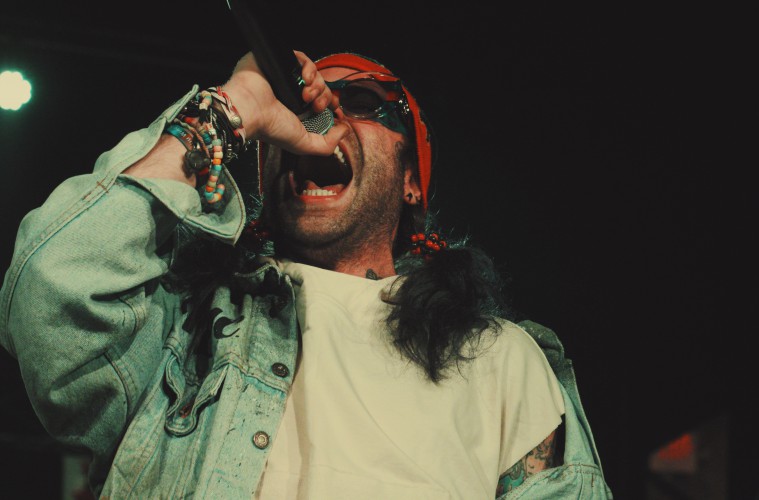 Rapper Mod Sun is in the midst of his BB tour across America, and took a stop at the Emerson Theater in Indianapolis this past weekend. Before the show, Michael Cottone had the chance to speak with Mod for a while about various topics including his new album, fashion, books, and Warped Tour.

Hey Mod, you get here safely from LA today?
Yeah man! Definitely been a lot of traveling the past few days.

Can you describe the creative process you went through when you made your new album, BB?
Yeah, it was definitely the funniest creative process I’ve gone through. Firstly because I decided to produce all the beats myself. I’ve worked with producers before, but I wanted to go back to my roots on this one. It brought my sound back to what it used to be, but mixed with the stuff I’m going through now.

What would you say is the biggest difference between the making of this album compared to Look Up or Movie?
In all honesty, I made BB in 30 days, right? I made the song happyBB maybe three-four months before the album dropped. And I sat in the studio and was like “I need to make some new music“. I made the song in 10 minutes, but had no idea what I was going to do with it. I showed the song to Bella [Thorne], who wasn’t my girlfriend at the time, and she was like “you gotta drop this shit“. So I dropped it the next day, and it just got lots of traction.

Is that when you decided to make an album?
Yep. After I made it I went into “album mode,” went on tour for a bit, then came back to record. I was in a house that I was moving out of, and I didn’t have another house lined up yet. So I had to move into my warehouse for 30 days, this little office with no windows, bro. And during that, I just made sure to not second guess myself. Since happyBB gravitated to people so much, the creative process was to let the song take you. So essentially you just didn’t want to force yourself.
Yeah! One of the things that Tom Petty said that I really vibe with was when he said “I’ve written thousands of songs in my life, and every time I’ve written a classic song of mine, I came to the crossroads where it’s like, ‘do I force the song or do I let it happen? And every time I just let it happen, I made a classic”.

You mentioned Bella earlier, how do you think your life has changed since you guys have met and developed your relationship?
Well, OK so like a lot, fucking a lot. But we became best friends for six months before we started dating, and I would bounce songs off of her, like I did with happyBB.

She’s got a perspective that you value very highly.
Exactly, and we didn’t start dating actually until the day that I moved out of that warehouse and I finished the BB album. So I was, like, making the whole album and sending the songs to her and getting her thoughts on them. She’s really helped me out musically, she’s a superstar. Life changes when you’re around someone all the time. My life has changed 100% because we support the hell out of each other. And I’ve never had a feeling like that before. I’ve also never felt this feeling of like “damn, I want to be there to help create your story and watch your story as we grow.” It’s about being in a relationship with someone you really look up to and respect, you know?

She even helped you direct one of your music videos recently. What was that experience like?
Yep, that was the first music video she directed actually, and she’s directed I think three more since then. She’s a genius, and I don’t throw that around very lightly. The first night I met her, we talked for six hours and the whole time I was like “you’re a fucking genius, Bella”. I like to have her involved in what I’m doing, and I’m lucky that she likes my music, my creativity. And the video turned out great, I’m blessed for that, but it also allowed her to spread her wings in a new way. It was good that her first experience with me because I love that.

You guys even got it to number two trending on YouTube!
Yep, then it got flagged, motherfuckers! Would’ve been number one for years, hahaha.

You have a brand new clothing line called “no safety” being launched. What made you choose that name for it?
Well, Vivienne Westwood is my favorite designer of all time. She’s the defining person who invented the style of punk. It’s a high fashion style, people thought they were wearing rags, but they were actually wearing $1000 t-shirts. Westwood styled the Sex Pistols. Her whole thing at the beginning was safety pins to put together clothes, instead of nicer materials. And I have an obsession with putting things together that don’t belong together, which matched up. One of my biggest things I go by is ‘don’t be careful, be full of care,’ and I used to be a pussy when I was a kid, scared to do anything. I realized that wanting comfort and safety was holding me back. So that’s kind of the origin of the name.

Can’t be afraid to create what you want to create.
Exactly.

And your fashion sense is certainly unique. What do you think gravitates you towards the clothes that you want to wear?
Well, I hate when artists feel like they need to brand themselves, and when you brand yourself, the first thing people see is what you wear. I’ve never done that, I’ve been told my whole that I can wear whatever I want. So when I wake up every morning, I dress how I feel, and if that means I wanna go out there wearing a fucking dress out of the house, then I will. Not kidding.

I don’t think androgynous clothing is as embraced as it should be today.
Yeah yeah! In my closet there’s more women’s clothing than men, you know? That inspires me a lot, to dress how I feel. I’ve studied fashion my whole life, not just the clothes, but the people who make them. Alexander McQueen has a quote that I use across all my art. “You can’t learn how to put something together until you learn how to take it apart”. He spent days and months just taking apart fabric and clothing and seeing what happens when he did that. So that’s inspiring to me, but I also love that I like to reinvent terms.

Like, I’m the hippie, right? Hippies are supposed to be wearing drug rugs and sandals and sh*t like that. I’ve never been like that. A hippie to me is not someone who goes on strike with picket signs and stuff. Don’t get me wrong, their voice was very important, but it’s not worth what happened to some of those people. Hippie to me now is more or less using your mind, man. And I like to wear dope shit, but I don’t want it to be materialistic, because I’m forced to wear clothes. Like I’ve been arrested for walking down the street naked and we can’t have that again, you know? So if I’m going to wear clothes, I’m going to wear what I want. Vans Warped Tour has played a big part in the development of your career and love for music. What was your reaction when you found out that this year will be the last for it?
I never thought it was going to happen, quite honestly. I don’t think it’s the right time for it, I think it’s the revival time for bands and artists that play on Warped Tour.

Why’s that?
Well, I didn’t know that the music that I was apart of was going to be so important later. I played in a band called Scary Kids Scaring Kids, and that was such an important band for the emo scene. Bands like New Found Glory are playing bigger shows than they’ve played in 12 years! And Rest in Peace, but Lil’ Peep was pushing the revival for that too. I’ve got a lot of respect for his direction, and I think people like that make me think “damn, don’t pull the plug on it just yet”. No disrespect to Kevin Lyman, he’s been putting it on since it started, but yeah I wish there was a way we could keep it going.

So you’ve written various books over the past few years, from Did I Ever Wake Up? to My Dear Pink. What inspires you to write the poems and entries you put into these books?
It all changed after my first book. I wanted to make sure that after I die, they say everything about me that I want them to say. I always knew I wanted to be an author. Kids don’t say they want to be authors because they feel like it’s an old man’s game. But I wrote my first book purely for the intention of writing a book, I had it under my belt. Like, any great author’s first time writing something is trash usually, but fortunately for me that book saved my life in many ways. It far out extends my music.

I agree with that.
Like people have read my books without listening to my music. My book sales go farther than my music sales, so it really did save me. I have musical idols obviously, and been writing songs since I was 14. My whole life my ears have been covered with music, but as much as I love that, I love hearing the words.

I know Jim Morrison is a huge idol to you, I feel like he’s got to be an example of someone who’s a musician and a writer that you mirror.
Yes, Morrison opened lots of doors for me. He led me to Arthur Rambo, who was Morrison’s idol. He was an 18th century poet who was just a f**king rebel. Bob Dylan is one of my favorites as well. Morrison was very intelligent but got a bad rep, people thought he was crazy, whereas Dylan got me into beats. Jack Kerouac’s On the Road was a big influence to Dylan. Those things resonated with me. Then I found Charles Bukowski. He gave poetry guts, it was weak before that. Like “roses are red, violets are blue,” f**k that shit. He transcended poetry, he wrote f**ked up stuff that no one would say, and that’s the route I take my poetry. I don’t like to rhyme in my poetry, it’s conscious, free of all that.

I’ll wrap it up like this. I look at everything I do like I’m already dead. All of this stuff is meant to be more important when I’m not here. Whether I’m accepted now won’t cause me to go another creative route. I want to make sure the art I’m making will be around forever. I want my great-great grandkids to be reading Did I Ever Wake Up. I just want to have people thinking about art over reality, you know?