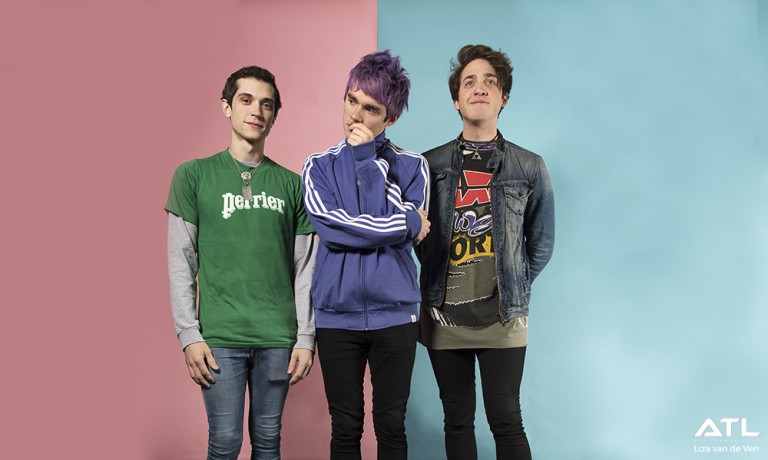 Messing About With Waterparks

If you ever sit down opposite Awsten Knight, Geoff Wigington and Otto Wood – the trio best known as Waterparks – you’ll notice from the off that these guys are in the game to have as much fun as they possibly can. The American three-piece, who have made huge waves over the last couple of years, manage to operate on a whole new level of newfound sarcasm despite clearly putting their honest hearts and souls into a blend of infectious pop-punk. Last week, the outfit stopped off in Eindhoven for a sweltering show at the city’s Dynamo, and Maui Vindevogel pulled them aside for a chat. Warning: take everything they say with a pinch of salt. Or don’t. How is the Entertainment Tour going so far?
Awsten: The Entertainment Tour has been awesome! The shows have been cool. If people are close enough, I go on top of their heads. Like, with my body. Sometimes in the middle of the show. Last night it was at the end, though! It’s been cool. It’s our first time doing a headline tour in a bus so that’s nice! Because there’s, you know, a refrigerator and there’s video games. Thing is, I don’t like playing video games because I always feel…umm.

Awsten: I feel very unproductive when I get done playing a lot of video games. So that’s been a thing the last couple of days. Do you know who Dappy is?

No?
Awsten: Yeah, I didn’t either until he pooped on our bus. Tour has been going really well though!

Who the fuck is Dappy?
Awsten: He’s a pop star or rapper, whatever. Are you feeling better about it now?
Awsten: I feel awesome!

And do you guys still feel great about it?
Otto and Geoff: Yeah!

It’s the second album, was it different? Did you do anything different compared to what you did with Double Dare? In terms of the process.
Awsten: The process wasn’t really different, but it was easier.

Geoff: It was a lot quicker.

Awsten: We used the same people, so Courtney Ballard and Benji Madden. I mean, it’s still the same team and all that behind it, and we still had Garrett doing some extra programming, but it’s just that bigger songs came out of it, I think.

Are there any musicians you guys would like to work with on future projects?
Geoff: I think Bruno Mars would be cool.

Otto: I don’t know. I can’t think of anything within the realm of Waterparks.

Awsten: I don’t. See, the thing is, I don’t wanna work with any pop punk or pop rock people because I just don’t think it’ll be interesting. And then I respect everybody that’s left enough to let near what we’re doing, but I don’t really wanna meet them.

Why’s that?
Awsten: Because I need someone to stay serious. I don’t wanna meet anymore people. What about producers?
Awsten: There’s some very cool producers out there, but the thing is that a lot of the ones I really respect have very big opinions. I feel like we’d bump heads so much that I wouldn’t appreciate them after the process. I like a more hands-off approach.

I just want to talk about your Twitter account. All Waterparks tweets are in caps. How come you’re so excited about everything?
Awsten: They are? I never noticed that.

Otto: His capslock key is broken, so…

Are there any musicians you guys looked up to growing up?
Geoff: The Maddens, Good Charlotte.

Awsten: I didn’t refer to them as The Maddens until fourth grade.

Geoff: Yeah neither did I. But yeah, you know, Good Charlotte was one of them. Linkin Park and Sum41 too.

Otto: There are too many for me to list because it’s just about everybody I came across. I mean, when I was younger. And it’s still the case for the most part where a lot of people are better than me.

Don’t get so down on yourself!
Otto: No, no, no! But it’s just, umm. I mean, that’s a good thing because then you’re not complacent?

Ah, ok. And do you guys have any guilty pleasures?
Awsten: I’m not sorry for anything.

Otto: I second that notion.

Awsten: Otto likes Cardi B. But you’re not guilty for it. Well, you’re not sorry for it.

Otto: A song. I like a song. Yeah, I never thought that would be a thing. Where would you like to see yourselves in five years?
Geoff: I’d like to be in Japan, that’d be really cool.

Touring?
Geoff: Umm, maybe have a house in Japan. Or, I don’t know, be financially stable. That’d be nice. And still touring.

Otto: Maybe own like a shed in the middle of nowhere, kind of like the Unabomber but with actual plumbing. That would be cool.

Awsten: I can’t tell you but I’ll show you.

So what would do you think your life would look like if you hadn’t started Waterparks? Awsten: I’d probably be killing it in an apartment. Umm, I’d have probably gotten into marketing or teaching. Teaching’s easy. Well, not easy, but it’s my go-to thing. It’s the easy option for me. I also considered marketing since it’s a stable financial thing, while you still get to be creative in ways that you push things to people.

What would you teach?
Awsten: Oh man, I don’t know. It’s like, I’m good with kids, I’m really good with kids actually. But I don’t know if I’d want to do that all the time. Because if they’re that young they shit themselves sometimes, and I’m not equipped to deal with that. But then when they get to like high school age, they’re gonna put me on Vine and try to fight me and shit. Yeah, I couldn’t be a teacher.

Otto: You just got yourself down.

Awsten: I don’t wanna touch pee shoe laces. My mom’s a teacher and she’s got a lot of horror stories. She’ll be like, “yeah this kid came out of the bathroom and got piss all over him”. She’s just like, “can you help me tie this”, and she’ll say no but still show them how to do it and make them wash their hands. I would just be like, “GROSS!”

Geoff: I had a very very nice put together life before this, so I’d probably go back to that. And then I’d probably go to college and dive into the mix of it all. I would like to go to like medical school for something.

Geoff: I don’t know why you guys find that funny but yeah, respiratory therapy. It’s a good profession.

Otto: It’s hard for me to say definitively because all my eggs have been in this basket for over a decade now. With that not in the mix, it could’ve really gone anywhere as far as what I decided to put my focus on. I’m just gonna go ahead and say astronaut just because the possibilities at that point would be seemingly infinite. I would realistically not be cut out for it, though. I can’t even do carnival rides but then I want to handle G-force. Just hopping in the teacup ride makes me want to throw up. I should definitely go to space.

You guys have some great ideas!
Awsten: You can ask me anything, I’ll have a good idea.

Otto: The one puky astronaut saving space, one vomit at a time.

Awsten: You would just ruin the ship so much that they’d decide to leave you there.

Otto: That’s Otto. Just floating around in his own puke up in space. Forever. That’s all I have to say, so thank you.
Awsten: Ask me something really personal.

What Hogwarts house are you in?
Awsten: It was Hufflepuff. I was really disappointed

Otto: You were about to get a high five and then you threw it away!

Awsten: I mean, I wasn’t proud? Okay, now I was disappointed. I just thought that was the most boring answer, wasn’t it?

I thought that too a few years ago, but it’s not. Hufflepuff is loyal and about friendship.
Awsten: Meh. But if you weren’t in it, if you hadn’t taken the quiz and you’re just looking at the houses, which one would you be like I wanna be in that?

Ravenclaw!
Awsten: Right? Nobody would ever just choose Hufflepuff.

Geoff: I think I was in Gryffindor.

Otto: I was not sorted. I just didn’t have the ability.

Awsten: He’s a prisoner of Azkaban.

Otto: I was too busy hanging out in puky space.

Awsten: That’s too personal. I’m gonna say dogs, but I have a cat and she’s my fucking baby so it’s hard for me.

Geoff: I think I’m more of a cat person.

Otto: I think I’m more of a dog person, I grew up with dogs.

Awsten: You were raised by dogs.

Geoff: I have a cat that likes to jump really high and then hugs you. I think he might be afraid of heights, but I’m not that tall.

Otto: My body has an inconsistent fear with heights. Sometimes it’s no problem, and other times I’m like, “nooooo”.

Awsten: I’m always afraid of heights. That’s why I’m afraid all the time, because I’m so tall.

Entertainment is out now.