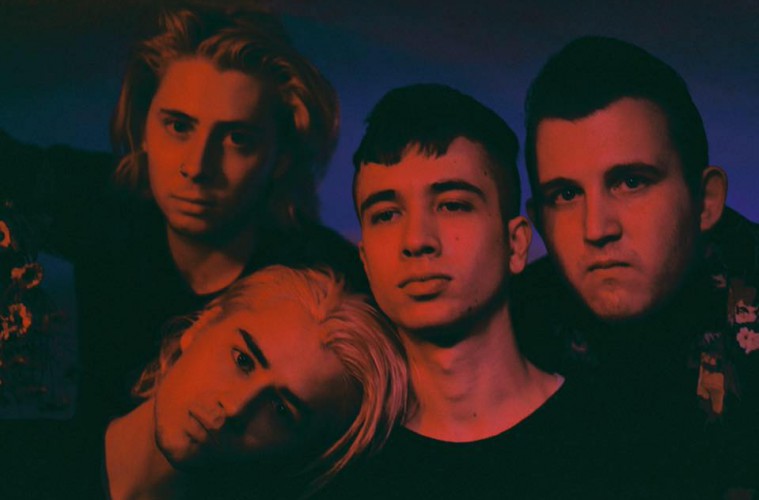 Here at All Things Loud, we thrive on new music. That’s why we’re going to be spending the rest of the year introducing you to our favourite new bands by means of introductory interviews with said artist. For April, we chose a band whose killer riffs, pulsating vocals and manic vocals are currently second to none: Dead! We called up frontman Alex, and he told us more about the band who look set to become one to watch the world over.

Hey Alex! How are you doing man?
I’m good thanks! Just in the pub with a beer.

For those who aren’t in the know: tell me about how Dead! came into existence.
We’ve been together now for about five years, which feels like a long time. We originally started out in Southampton, which is close to the Ilse of Wight. Over the last year few years we started to take the band seriously and did some DIY touring and plenty of crazy basement shows. Eventually we picked up sticks and moved to London, still with the same “we don’t know what we’re going but we know what we want to do”-ethos. Everything we do is very DIY, apart from the music. It’s going good with the band; we recently got out to Holland and played at Eurosonic in Groningen. It was really cool!

New single Enough Enough Enough just came out. Can you tell me more about the ideas surrounding the track and how it came to be?
The idea has a two-fold answer; its meaning and why we chose to put it out. The first answer is that the song is very self-critical. It’s the first single from our debut album, which comes out in September. It was important for me to get the more negative songs out of the way so that I could write and talk about things. The lyrics are very simple and childish, essentially poking fun at yourself and not taking yourself too seriously. It asks questions which you can ask yourself. Our lives are changing fast, and we’re just huge music fans wanting to write songs and play shows. That’s what people will hopefully get from the track, and maybe they’ll start questioning the negative aspects themselves. The second part to the answer is as follows: it’s just a simple, ballsy guitar rock song and we wanted to get the message across. Future releases may sound more ambitious and different to what we did before, but first we wanted people to know that we’re a loud British band.

It’s also your first track in quite some time – why the wait?
I’ve been asking myself this question as well, and there’s a few reasons. The touring for one. We’d been touring with Deaf Havana and Frank Carter, which was extremely helpful. We spent a lot of time writing and recording new stuff, which is when the pressure built-up. We spent ten days in a studio in December, and another month and a half in another room just working on tracks and scheming about what will happen in 2017. We’re confident. It was important for us to take some time to figure out what kind of band we want to be, because we all like very different music and we’re very different people to who we were when we started. It’s important for us to take our time and do it right instead of shuffling everything around. We have lots of things ready to go, so there are now no more breaks!

At the start of February you performed your biggest headline show to date at the Boston Music Rooms. How was it?
It was mental, man! We’d been doing these little shows called the Damned Restless Future shows, which we played in basements, studios and other weird locations. There’s always been a headliner, but most venues were no more than 70-people capacity. We not put on our own headline show in London with a promoter and stuff before. It was very nerve-wracking and I was really shitting myself. Thankfully, though, the show was everything and more than I could have ever hoped for, and having people sing my lyrics back to me was a moment that I’ll never forget. Going off for the encore and coming back put a tear in my eye. It’s amazing to see a room full of people with such a broad mix of fans. Lots of older people were there, and I also saw a lot of younger kids. It really was very heartwarming, and that’s important for a band to have – a fanbase with proper music fans.

This summer you’ll be playing some absolutely massive festivals. Which one are you looking forward to most?
It was like this last year, and it was impossible to pick. I don’t really believe we’re playing them until we show up and do it. I went to Reading Festival in 2006 when I was 12, and the idea of even playing there last year was mind boggling to me We’re doing both the UK and Paris legs of Download Festival, and also some smaller festivals around the UK, which is really exciting. They’re independent ones and it’s really good that people are supporting these events. They’re always full of people wanting to have a good time, because people at the small ones are always really keen for checking out little bands. The same is to be said for big festivals too, even if the stages are spread out across big fields. I can’t wait to drive through Europe, those drives are always beautiful.

As a vocalist, where do your main influences lie?
It’s hard, it’s hard. If we’re going for pure vocalist then I’d have to say Eddie Vedder. The way he has his own unique sound on every song and how he plays his voice the same way as he plays his strat. He works it so well and I’ve always been blown away by him; it’s so distinctive! Whether you love or hate him, having such a unique voice is amazing. He soundtracked the film Into the Wild too, and some of those tracks are also really weird and quirky. My second vocalist would have to be Roger Daltrey. He’s a bit older now, but he still tried very hard. Back in the day he was really swinging that mic and it was pure theatricality. I’ve been a fan of The Who for ages, they were the first band I got into. My third vocalist is Brian Molko from Placebo. Just like Eddie Vedder, he has such a distinct voice that he uses so well. When it comes to his lyrics, he tackles important stuff like drugs and sexuality. You always know what he’s saying, but there are so many different avenues it could go down in your head. The way you speak should be able to be interpreted differently by so many people. That’s one of the magical things about music, how the lyrics can have such an important message. When it comes to lyricists, I’m a big fan of Jordan Dreyer. The way he writes his stuff and the spoken word things he does are just great. Some things don’t make sense, but you’re there all like, “oh shit, he’s just created a whole spoken word track about him getting mugged around San Diego”. He puts you in a scene, almost like you’re on the street corner. For the third lyricist I’m gonna throw a curveball and say Biggie Smalls. I used to work in a studio and my boss sat me down one day and made me listen to a Biggie track. The way he enables listeners to picture themselves in a particular place is great. He talks about stuff like the colours on the wall, and he does so many things while being discreet.

Thanks for your time Alex!
No problem man, see you soon!

Dead! will appear at the likes of Rock am Ring, Download Festival and Nova Rock this summer. Check out their Facebook page here.