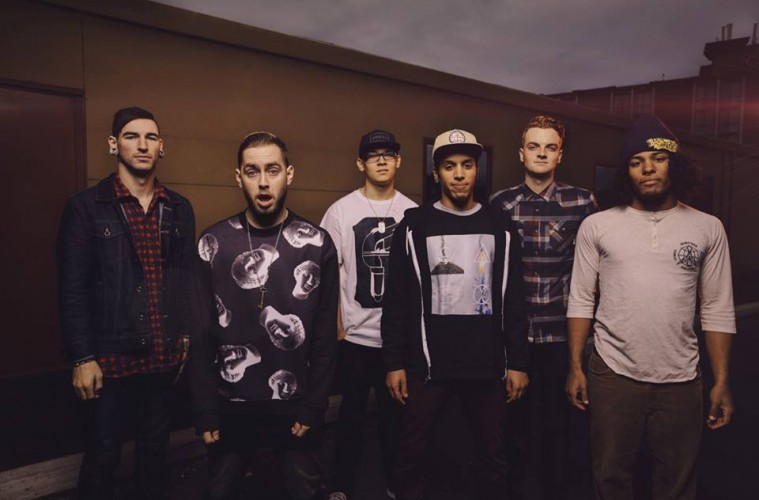 ISSUES: “It sounds like a disco song, it’s ridiculous”

As we arrive outside the Melkweg in Amsterdam, only one word can describe the scenes we’re experiencing – chaotic. Later that evening, approximately 1,500 fans will cram into the main room of the legendary venue to watch Pierce the Veil and Sleeping With Sirens perform as part of their World Tour. Joining them on the European leg of the tour is the Tyler Carter and Michael Bohn-fronted sextet Issues. With main man Carter on vocal rest, we spoke to co-vocalist Bohn, bassist Skyler Acord and drummer Josh Manuel ahead of their show later that evening.

Our chat was centred on Issues’ second album, a record which is currently in the works. According to Manuel, the band were in the studio for three weeks before heading out for this current European jaunt, although recording itself won’t actually take place until the Summer. “We’re pushing the halfway point” explained Manuel, before adding that the record will see Bohn have a hand at clean singing for once. At this point, Bohn explains how he’s been experimenting with different vocal styles in order to try new things. “Tyler kind of pushed me to do that” he says, before Manuel takes a quick look at Carter, who is quietly overseeing the whole interview from behind us. Although not being involved in the actual interview, it’s very evident that Tyler is in control. It’s good to see a band with a frontman who is as involved in proceedings as the management is, and it’s something which is seldom seen in the world of modern music puppetry. Manuel continues to explain the sound of the record, stating that the “chord progressions are a little different,” before explaining how Issues’ recognizable RnB style will remain present.  For the most part, it’s evident that both Manuel and Bohn are still quite unsure as to how the record will actually sound. It’s still early days, something which Manuel sums up pretty well by saying, “I don’t know” four times during his answer. “We’re trying some weird stuff, but we’re still trying to keep things normal too,” says Bohn. On the topic of whether the record will lean more towards RnB, Manuel says that the album will still feature a healthy mixture of both RnB and metal. “It feels like we’re kind of pushing the RnB, and it feels like we’re also kind of pushing the metal at the same time” adds Bohn before Manuel briefly points out that the record will still be getting heavier.

Our discussion moves away from what the record is currently sounding like to what has influenced it to sound this way, with Manuel and Bohn both staring at eachother in a long, awkward silence as they figure out how to answer the question. “Instrumentally a lot of it is, like, all over the place” starts Manuel, with Bohn adding that its lyrical nature is more direct. “We like to have some metaphors, but lyrically we’re also more direct and straightforward [on this record]” continues to co-vocalist as bassist Skyler Acord enters the room. “We left our amp in the van” explains Acord as Bohn tells him to talk about one song in particular. “There’s one song that’s kind of out there, but it’s really cool” he says, adding that its working title is Da Realest. “It sounds like a disco, RnB fusion jazz song, and it’s ridiculous. It’s heavy, but we don’t really know how to describe it”. He goes on to tell us that the band is “trying a lot of new things that are on the fringes of what other people do”.

One thing the trio make clear is that no new material will be played live on their upcoming tour with Pierce the Veil and Sleeping With Sirens, as a lot of music is still “in the works”. “A lot of stuff has been written completely, but we keep going back to change things as well” says Bohn as Sleeping With Sirens frontman Kellin Quinn briefly interrupts our (concluding) discussion by messing around with the door. “Why is this door jammed?” he asks, causing Manuel, Skyler, Acord and Carter to laugh. This moment was the catalyst for the end of our brief discussion, made shorter due to Carter’s unfortunate vocal rest requirement.

Later that evening, Carter and co. (completed by guitarist AJ Rebollo and absent member Tyler Acord) treated a near full Melkweg to a smashing performance which spanned their whole career thus far, showing everyone present that Issues mean business. Whatever Issues come out with next, it’ll undoubtedly be some of the best music they’ve ever released.