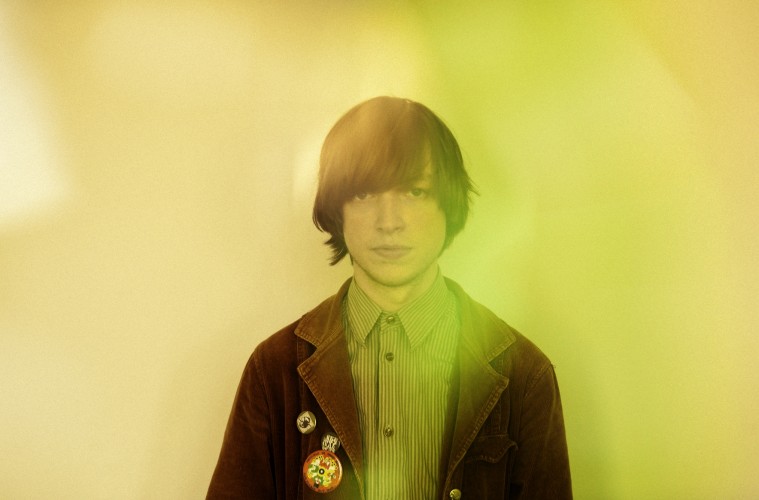 It seems crazy to think that 2013 is almost over, considering what a whirlwind year for music it’s been! This year saw epic returns from David Bowie and Daft Punk, as well as a majestic comeback album from Arcade Fire! The successes of 2013 aren’t just seen in what the big acts out there are doing, though. Delve deeper into the more alternative side of music and you’ll find a whole host of 2013’s true successes. Amongst those true successes is a wave of unbelievably talented psychedelic rock. A lot of people will agree if you say that bands such as the magnificent Temples and the hypnotic Toy are taking the crown, although there’s one other musician who’s on his way to the top – tonight’s attraction, Jacco Gardner. Born in the remote Dutch farming village of Hoorn in 1989, multi-instrumentalist Jacco’s music sounds like early Pink Floyd mixed with Baroque Pop, Chamber Pop and twisted psych melodies. His 2012 debut double-A Side “Clear the Air/A House on the Moon” is what garnered him tons of media attention from respected websites like Pitchfork and NME. His debut album Cabinet of Curiosities was released in early 2013, and since then he’s taken in shows all over the world to crowds in their thousands. Tonight he plays his penultimate show of a successful year, at the 300-capacity Paard van Troje in his home country of the Netherlands.

Support for tonight’s show came from Earth MK II, whose vocalist and drummer Hugo van de Poel was a childhood friend of Jacco himself. Amsterdam-based Earth MK II mix Neo-Psych together with various different elements of pop and jazz, performing a 30-minute set which included singles Here I Am and Forever Yesterday. Although the songs were memorable and interesting, there seemed to be a lack of power and punch from these songs. It all seemed slightly restricted, yet with enough perfecting this four-piece could see themselves rise to a similar level of prominence that Jacco Gardner has right now. It’ll take time, but this band has the potential to be much bigger than they are.

Following their set, Jacco and his four band members (Jos van Tol, Keez Groenteman, Jasper Verhulst and Ben Rider) immediately took to the stage to set their own equipment up whilst engaging in some light banter with crowd members. After half an hour of shuffling about onstage, it was time for the band to get down to business. Opening with the album’s instrumental title track, Cabinet of Curiosities set the scene for what the capacity crowd would experience tonight. Ben Rider’s synthesized Harpsichord gave the room an eerie feel, especially with the video screen at the back showing old 50s and 60s movies (there was one video per song, and they all complemented eachother well). This was followed by A House on the Moon which, with its upbeat yet gloomy organ melody and Pink Floyd-referencing lyrics, was the first of the show’s many highlights. A downbeat rendition of The One Eyed King preceded an equally haunting version of Help Me Out. After two downbeat songs, Jacco and his brilliant band slowed the pace down further with the brilliantly melancholic Summers Game, which was backed up on the video screen by a movie about a young girl discovering the fields on a warm summer’s day. With the wet and miserable weather outside, this video got everyone yearning for some warm weather (something which Jacco himself acknowledged).

After a somewhat downbeat section, the band unleashed breakthrough single Clear the Air onto the excited crowd. This song demonstrates everything that Jacco does best, with a sweet harpsichord melody accompanying some clean vocals and hypnotic xylophones. The lyrics in this memorable song also demonstrate Jacco’s ability to write a perfect love song, whilst still incorporating some clever weather-related metaphors for love and relationships. Lyrics like this are present throughout his whole debut album, which gives the album a really natural and personal feel to it. Combined with the woozy and hypnotic musical elements in his songs, it really makes the listener feel at one with the music. After this, the band launched into a jumpy version of The Riddle, before Jacco introduced new single The End of August to the crowd, which he described as being a song that shows his love for the autumn season. It kept the audience on their feet, before the band launched into a twinkling rendition of Watching the Moon and an extended version of The Ballad of Little Jane. Second single Where Will You Go followed, with the haunting video on the screens (paired with reverb-laced synths) putting the audience into a deep trance. We were now nearing the end of the set when Jacco introduced a song that you could “fall asleep to”. He was right, as they proceeded to play an extended version of Lullabywhich was filled to the brim with sleepy melodies before the drummer took a microphone and started squealing through it, producing a sound which was reminiscent of a troll in a cave. It makes no sense on paper, but paired with the film on the screens it made total sense. This squealing gave way to a full-on rock out before ending the set with a storming rendition of tonight’s most memorable song, Chameleon.

Having left the stage after Chameleon, the crowd were in complete silence with some people even starting to leave the room. Two minutes later, however, the band re-emerged onstage to play two new songs! The first of these two, the fully instrumental Notus, started with Jos van Tol’s pounding drums, before a jangly guitar riff and keyboard melody took the reins. The second song (which had no name) was upbeat, powerful (even with poppy elements) and by far one of the most memorable moments of the night. By this point, the show had finally ended to rousing applause and loud cheers from a respectful crowd of all ages. If this is just the beginning for Jacco Gardner and his band, then the future can only be brighter!