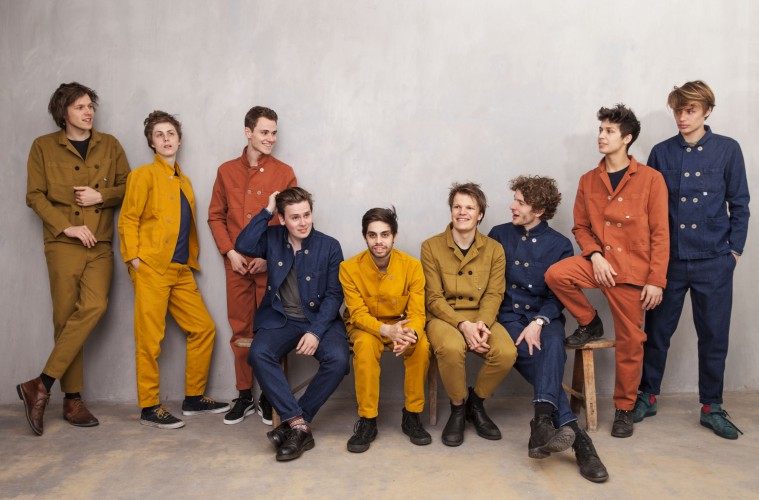 Jungle by Night: “We just do whatever we want”

When a band finds themselves employing within the means of a genre generally considered as not being mainstream, it can be an extremely steep uphill battle when it comes to getting yourself out there. Some acts have it easier than others, although this journey isn’t the same for everyone. The Amsterdam-based instrumental afrobeat collective Jungle by Night have faced many ups and downs during their existence, with all the puzzle pieces slowly but surely starting to fall into their destined spaces. We sat down with bassist Peter Peskens and percussionist Gino Groenenveld a few hours after their huge set at Pinkpop Festival to discuss the past, present and future of Jungle by Night.

Earlier this year you released your latest record, The Traveller. Tell us a bit more about the record.
Peter: When we started with this album we wanted to do something new that we hadn’t done before. We wanted to do something that, at least from our experience, wasn’t there. We started working on it in May 2015, and in that summer we played a lot of shows. After it, we began working on the album properly and started making new songs. It was basically rehearsing, rehearsing and rehearsing.

Gino: We also had a lot of meetings about what we wanted from the album. We wanted to have different vibes; we wanted a couple of danceable tracks, a couple of slower tracks and stuff.

Peter: It’s always difficult to tell a story with instrumental music, so we really wanted to emphasize that. The Traveller is about a lot of the travels that we had, as well as a lot of the experience that we had. After making a lot of songs we selected a few of them and recorded those.

Gino: While we were playing live we visited a lot of countries, so the record is also about showing the characters of the countries we played in. One of the songs has a Turkish vibe going on, too. Some of us really like minimalistic classical music and stuff, so we put some on the record. One day we also saw this amazing voodoo funk dude and wanted to have something like that on the album.

So how does it stand out compared to your debut record?
Peter: In a lot of ways it’s very difficult to reflect on your own album, but I think The Traveller is way more balanced and I think there are a lot more layers and ingredients on it. I think it has a more distinct sound too. The inspiration on The Traveller came from travelling around different countries, but which country stood out to you the most?
Gino: I think Japan. We went there once and it was crazy. The people over there are so enthusiastic at the start of the concert, whereas in European countries it can take crowds a few songs to get into it. Japanese fans went crazy from the start. The whole culture is also so crazy.

Peter: They’re really dedicated! A band playing after us once was also instrumental, and apparently they checked all our YouTube videos and knew exactly what kind of gear we played with. I was talking to the saxophone player and I said, “oh yeah, you have the same mic set-up” and he said he picked it because we had the same ones.

Gino: One of their members also had the exact same conga’s as I, which was pretty weird but nice.

How do you see your sound progress in the future? Have you got any idea in which direction you might want to head?
Peter: Not yet I think. We just released this album two weeks ago, and we’re now playing it a lot during our live shows. We don’t have any idea where it could go from here.

Gino: You just have to remember to always be open-minded and see how it goes, yeah. We don’t know what the future holds for us. So where do you find the balance between keeping a more accessible, poppy sound alongside your afrobeat and afrofunk influences?
Peter: I don’t think we’re really aware of that balance. As we travel, we pick up a lot of new influences.

Gino: I think it also happens quite naturally while jamming. Our drummer, for example, is really into hip hop.

Peter: It’s not something we naturally think about to be honest. Everything we do naturally evolves throughout and from the beginning, and it’s also evolving into new music and new sounds where afrobeat is still part of it, but maybe a bit less compared to when we started.

Gino: Now we have a lot of rock influences as well.

Peter: There are a lot of rules in music, especially in afrobeat where you have to comply with a lot of them. We don’t stick to that, because it’s boring.

What kinds of rules?
Gino: There are a lot. Usually you have to have a baritone sax, we don’t have that. You also need to have a woodblock on the congas; there has to be a certain percussive feel to it all.

Peter: There have to be two guitars as well.

Gino: Yeah, but we never have that either. You always need a rhythm guitar and a more melodic one. At the very start we complied with those rules a bit, but we were also young and had to find out what this music was all about. Now, we just do whatever we want. One of us will be like, “hey, this afrobeat beat fits with this kind of percussion or groove” and then it just happens. There’s also quite a lot of you in the band. Is that tough when you’re working on new songs?
Peter: It can be tough, but it can also be very inspiring. It takes us a lot of time to work on songs. Sometimes one person is really enthusiastic about one part, but someone else really hates it. We had that a lot, especially with this album. Also, we threw parts away and then made brand new bits which everybody was happy with. It takes a lot more effort, but at the same time it also gives you a higher quality of music, I guess.

There are a lot of bands out there in Holland right now. What are you doing to stand out in and amongst the masses?
Gino: What makes a difference is our live vibe. On this album we had a certain structure and during live shows we kinda let go of that and draw out the songs a bit longer by adding solo’s and stuff. We have this amazing energy according to others, which we constantly try to maintain. If we’re very energetic onstage, then we also get that back from the crowd. Would you ever consider throwing vocals into your songs?
Peter: Possibly, but then we feel that it should be something special. It also has to have an organic vibe.

Not just forced.
Peter: No, not at all.

The Traveller is out now. Stream it below.