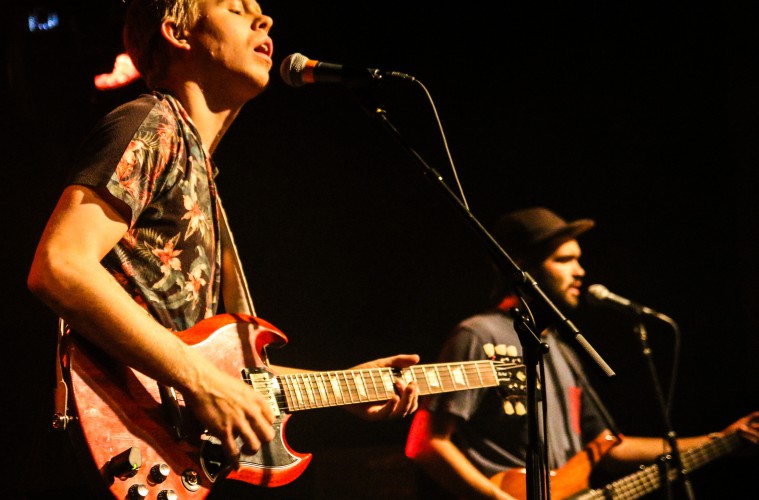 Scandinavian music, you know how it goes: moody and ethereal instrumentation, hauntingly deep vocals and overall sense of wrongdoing in every case. That’s unless you’re Bergen’s very own Kakkmaddafakka, though. The Norwegians carved themselves a sun-kissed reputation from the remnants of early 2000s musical phenomenon The Bergen Wave, which saw a whole slew of local bands emerge from the undergrowth. Having released new record KMF earlier this year, the classically trained indie poppers are finally starting to reap the rewards of their slow-burning success by playing big stages continent-wide. Their live show, which is infectious and energetic, may be their unique selling point, but the music that supports all the madness is clearly what it’s all about. We sat down with the band ahead of their sold out show at Amsterdam’s Paradiso Noord to discuss the new record, working with Erlend Oye and how important fashion is to them.

Hey guys. You released your new album KMF earlier this year. Can you tell me more about the recording process?
Kristoffer van der Pas (drums): We recorded this album in Bergen, which makes a change from previous records. The last one was recorded in Germany with a German producer, as well as Erlend Oye. He wasn’t as big a part of this production compared to before. He was more like the ‘last word’ on all the songs. We produced KMF on our own, though. It took a long time again, but we learnt a lot from the process.

How does it stand out compared to your previous releases?
Van der Pas: We’d grown a lot I’d say, and I think you can hear that a lot on KMF.

KMF has some elements of reggae and 80s pop, but are there other styles which you want to explore in the future?
Van der Pas: We never had our own path of how we want to make music, it’s just what we’re interested in at that time and what we listen to. We want to have fun with music, and not just in one genre or across one style. We just play something and it ends up becoming a Kakkmaddafakka song in a way.

How do your ideally see yourselves progress in the future?
Stain Saevig (bass): Well, you could say that we’re getting older. Hest was our crazy album, and Six Months is a Long Time was a bit less crazy and a little more adult. Now, KMF is the same but better. If I can speak for myself, then I’d like to say that I miss that craziness a little bit. If I were to decide, then I’d like to go that way again! What about you?

Van der Pas: We’re getting to know each other better musically on every album, so we’re also getting closer to one another in a way. On our first album, it was total chaos. Somebody was up there, somebody else was down here. We got a little closer on Six Months is a Long Time and KMF, and on the next one it’s gonna be, umm.

You’ve worked with Erlend Oye a few times, but is there anyone else you want to work with either as a producer or as a collaborator?
Van der Pas: There are so many. I know that Axl would love to work with Rick Rubin, that’s his favourite producer. There are so many talented people out there who manage to create great sounds. Of course, if we could work with the guy who produced The Strokes’ Is This It back in the day, then that would be amazing. It’s a long time since that album came out, and he’s probably changed.

Saevig: You never know these things, do you?

Van der Pas: There are so many amazing producers out there, and of course it would also be cool to do collaborations with other bands. Anyone in particular?
Van der Pas: I’m gonna quote Axl on this one: 2Chainz. Haha. I wouldn’t say that, though.

What would you say, then?
Van der Pas: Maybe Johnny Marr from The Smits could lay down some cool guitar tracks. But no, I think we’re in a good place now to do the stuff that we want.

Saevig: It’s important to have that liberty.

You emerged in a time where the Bergen Wave became quite notorious. What’s the music scene like now in Norway?
Van der Pas: Now there’s actually a new Wave coming up! It’s getting pretty crazy now, with Aurora, who is from Bergen. Also Kygo, he’s from Bergen.

Oh, is Alan Walker from Norway?
Van der Pas: Yeah, he’s from Bergen! His Dad is English though.

He’s the one with that song Faded, right?
Van der Pas: Yeah, I think it’s the most played song on Spotify! There are some pretty good up-and-coming DJs in Norway at the moment, it’s cool.

So how important do you think things like the Bergen Wave are for music in Scandinavia?
Saevig: It’s always good to have some kind of radar on your hometown, so that you can see what’s happening.

Van der Pas: If the scene was completely dead then that would be really bad for us too. Scandinavian music has always been at the top in a way. Our neighbours in Sweden have always produced amazing music, and Bergen itself is a really small town so it’s fun that we know these people. We don’t know Kygo, though.

Van der Pas: It’s a small community, so we can share experiences.

How do you think Scandinavian music stands out compared to the rest of the world? It’s very distinct.
Van der Pas: Yeah, in a way it is, but in a way not. It’s all inspired by American music I guess, but it’s more interesting to say that something is from our region.

Van der Pas: Of course, you can hear that something is Icelandic or Swedish, but I don’t think that my ears are trained to hear music from Bergen or Norway in general.

You’re currently touring Europe yourselves, but how has the tour been going?
Van der Pas: It’s amazing. We went to Prague for the first time, which was amazing.

Saevig: And our second time in Vienna!

When we last saw you guys, you played at Paaspop in Holland. You walked onstage to the Champions League theme song, which was quite fun. Who is your favourite football team, though?
Van der Pas: Mine is not Norwegian, I follow English football. Van der Pas: And this guy here is down in the Championship.

Saevig: I’m a Leeds fan, and that’s something I decided when I was a child so I can’t change it now. It’s been ten hard years, but I also like Arsenal. I think they’re gonna do really good this season.

My friend said the same thing earlier, so then I reminded him of the last ten years.
Van der Pas: Hahaha.

Saevig: Did he remind you of last week? Haha.

Let’s not talk about that. I just want to mention your fashion blog: is that a serious thing?
Saevig: Do we look serious? Hahaha.

I do get a dry, sarcastic vibe from you guys.
Van der Pas: I think you should talk to Axl about the fashion blog, to be honest. It’s more his thing.

Saevig: It’s his blog yeah. He doesn’t use it much lately, but he does talk about it a lot.

KMF is out now. Stream it below.