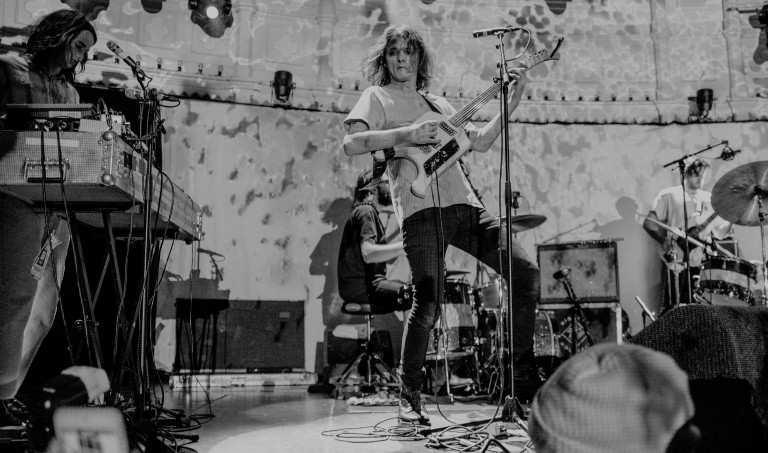 King Gizzard & the Lizard Wizard in Amsterdam: Two Nights of Revelry, Chaos and New Music With the Band of the Moment

Jesus christ, it certainly feels like déjà vu to mention King Gizzard & the Lizard Wizard in the same sentence as Amsterdam’s legendary Paradiso. The musical temple, which celebrates is 50th birthday this year, has been a mainstay venue for Stu Mackenzie and co. in the last few years, having sold it out a total of five times in the last four years. The Melbourne septet have a strong relationship with Holland, returning year upon year for headline shows and huge festival appearances at the likes of Lowlands, Down the Rabbit Hole and Best Kept Secret (the latter of which they absolutely pulverised last year). The outfit have left no stone unturned in their pursuit of the perfect live how, putting out five albums in one year as a means of justifying endless world tours. Not that their relentless release schedule is purely aimed at backing up their visual-heavy touring, though; on the contrary, King Gizzard & the Lizard Wizard are a well-oiled machine whose rate of production is unrivalled. Live, they’re an equally well-oiled machine who possess an electrifying sense of cultish energy other artists could only die for. This week, the band stopped off at the Paradiso in Amsterdam for two sold-out nights alongside special guests Mild High Club. Both nights are preceded by the aforementioned special guest, with their placement on the bill largely down to the album Alexander Brettin and co. made with King Gizzard last year – the acid jazz-infused Sketches of Brunswick East. It’s the first album which sees Mackenzie and co. join forces with another artist, and live they also find time to present the Paradiso’s throng of dedicated fans with fuzzy album highlight Rolling Stoned. The song sees Mackenzie join Mild High Club onstage towards the end of the set, just after an honestly lacklustre rendition of popular MHC track Windowpane. Over two nights, Mild High Club managed to demonstrate a watered down version of their generally powerful recorded output, something which could be considered a let down for some. Brettin and co. aren’t necessarily a bad live band; in fact, they’re quite alright once you get over the fact that all of the power and pomp of their studio recordings has been replaced with a lilting melodies and over-distorted vocals. Based on the lack of energy presented by the crowd both nights, you could suggest that many people hold a similar opinion. There’s something quite magical about seeing a band of King Gizzard’s stature and cult history stand tall in front of a sold-out crowd in Holland’s most prestigious venue. For all their quirks and obscure musical offshoots, the Melbournians have definitely carved a nice out for themselves which is equal parts what the fuck and wow, this is amazing. And as expected, both of the band’s Dutch shows were exactly that. Taking to the stage just after 8:30pm on night one, the septet kicked straight into last year’s Rattlesnake, an eight minute microtonal epic backed by hypnotic visuals courtesy of the band’s resident visual maestro Jason Galea. His working aesthetic and overall vibe has become synonymous with the band’s music, spanning multiple visual disciplines and adding an extra layer to their already dense music. From the word go, limbs flew across the beer-drenched floor as if there was no tomorrow, a feeling which translated across both nights. Although the band don’t tend to switch up their setlist a whole lot over the course of the tour, there were some initially subtle differences between the nights which ultimately proved to be defining factors in the band’s multi-faceted skill set. Night one saw an early leaning towards the band’s microtonal songs, including the hypnotic Sleep Drifter, gloomy Doom City and manic Billabong Valley, the latter of which sees keyboardist Ambrose Smith handle vocal duties. The trio of songs were accompanied by a double-whammy of Greenhouse Heat Death and the punk-y All is Known on either side, injecting the band’s first show with a hefty dose of unbridled energy from the word go. There’s something about King Gizzard’s ability to stir up frenetic crowd responses which puts other bands to shame, although in order to believe that you really have to witness it first-hand and allow yourself to be pushed and shoved to the point of no return. Both nights saw the septet kick off with a spate of Microtonal songs, although even within this small segment of the show there were enough little changes to make each night memorable in its own way. Night two saw the omissions of Sleep Drifter, Billabong Valley and Doom City, with fellow 2017 cuts D Day, The Book and Polygondwanaland mysteriously disappearing despite making for huge buzz on night one. Instead, the band played an extended segment of Murder of the Universe‘s third and final chapter, which is spearheaded by the confused cyborg, Han-Tyumi, and a sonic barrage of sludge metal (Digital Black) and gritty synth rock (Han Tyumi, the Confused Cyborg). The final part of the chapter did not feature, although it’s unlikely that including it would have made much difference had Han-Tyumi reared his head once more. The reason for all these omissions eventually became apparent when Mackenzie halted the show on night two after a chaotic rendition of The Lord of Lightning. “Okay, we’re going to do something kind of new here” he declared, adding that the whole show was being recorded. “I’m scared” he nervously laughed, before the band kicked into a brand new song (so fresh that it’s as yet untitled). The three-minute long instrumental jam harked back to the band’s youthful Mind Fuzz days, combining clattering garage riffs with pummelling rhythms courtesy of Michael Cavanagh and Eric Moore.  It was on this new cut that guitarists Cook Craig and Joe Walker seamlessly intertwined their sonic musings as Mackenzie took the lead, with the trio coming across as an incendiary, godlike collective. Just like the rest of the band, basically. The sound of new music was enough for fans to go wild, even if it did mean that popular single Cellophane had to be forfeited following a grandiose outing on night one. Its pairing with The Lord of Lightning is one of the best transitions the band pull off live, although it doesn’t quite match the hysterical intensity of what came next. And what came next, you ask? As the visuals faded, both nights suddenly sprung back to life on the gripping Crumbling Castle, the ten-minute opener taken from last year’s free-for-all Polygondwanaland album. Its interlocking riffs made way for a clattering rendition of The Fourth Colour on night one, although it was on night two where the hype surrounding both songs truly came to life. Omissions elsewhere in the set allowed the band to play both songs in their entirety (as opposed to abridged versions), including the Gizz-meets-Stranger Things synths on the former and a woozy breakdown on the latter. Despite abridging the renditions on each night, the one staple in the show was what Gizz followed it up – a trio of songs from career highlight Nonagon Infinity. From Robot Stop‘s chaotic whirlwind of riffs all the way through to the headbang-worthy Gamma Knife, Gizzard’s Nonagon Infinity medley’s tend to make for one of the best moments of their shows. On night one, Gamma Knife’s final blow made way for a calm ending, namely the jazzy Beginners Luck (lifted from last year’s fifth album, Gumboot Soup). Mild High Club’s Malcolm Brown (who you may recognize from Whitney) joined them on additional keys as Mackenzie and Ambrose shared vocal duties on the gambling-influenced track. “Join me at the table, if you’d like to place a bet” sings Mackenzie at his most soothing, with Ambrose adding an extra layer of seductive tones. The track’s closing solo (courtesy of a once again interlocking Walker and Craig) made for the show’s finale on night one, however during the second show it merely served as a sign that the best was yet to come: The River. For those unaware: The River is one of King Gizzard & the Lizard Wizard’s best works. The ten minute cut is as sprawling and expansive as a physical river, floating along with effortless ease by means of jazzy licks, a schizophrenic mid-point jam and a finale which slows down proceedings whilst still sounding unbelievably sexy. There aren’t many moments in music which you could classify as outright sexy, but The River’s finale is one of those moments. Leaving the stage to cries of an encore (which they never do) and an eardrum-bursting bout of cheers, it instantly became clear that King Gizzard & the Lizard Wizard’s two-night residency in Amsterdam was everything you could possibly want from the band, and so much more: a frenetic back catalogue, more crowdsurfers than there are dedicated Arsenal fans, and the feeling that you’ve just witnessed a band who are currently at the top of their game. It doesn’t look like there’s an awful lot set to stop the septet from going strength to strength this year; and not that there should be anything in their way, not least when you already have more new music on the way in and amongst an already-packed touring schedule. 2017 was the year that King Gizzard & the Lizard put out five extremely varied albums, and 2018 will be the year that they show the world exactly how spectacular each one is.

Check out a full gallery from the band’s first Paradiso show, 5 March, below.