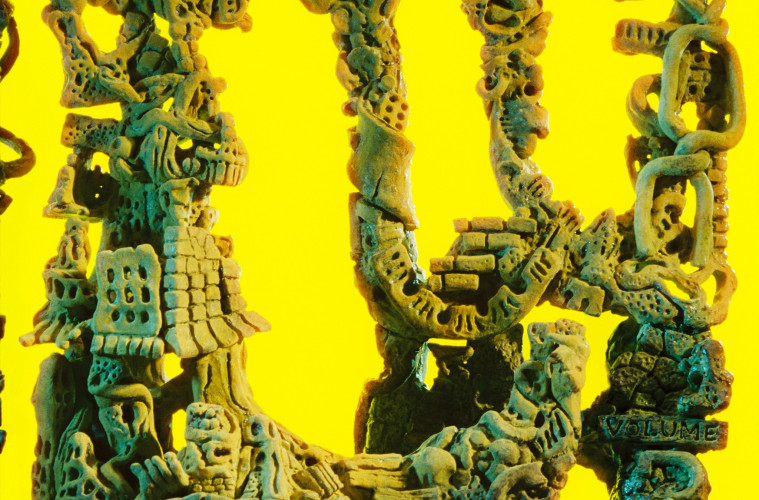 It almost feels as though it was yesterday that King Gizzard & the Lizard Wizard dropped their microtone-infused, genre-bending new album K.G. The pulsating collection marked the Aussie troupe’s sixteenth studio album, exploring the limits of their microtonal abilities across ten tracks which ranged from Turkish house and doom metal to indie folk and prog. Given the album title, fans were quick to assume that a companion album utilising the band’s remaining initials. And how right they were: L.W. is the follow-up to K.G., and it arrives a mere three months later. Not that its arrival is a surprise, though, for the band already dropped three singles including the groove-laden If Not Now, Then When? The new record is slated to land this coming Friday (26 February), and here on All Things Loud we have the first opinion of it.

Album seventeen starts exactly where K.G.’s left off: clattering guitars, harsh distortion and an almost bombastic fanfare of noise. If Not Now, Then When? – which was accompanied by a shimmering animated video – spends a minute finding its place before emerging from the rubble clad in lilting keyboards, bouncy rhythms and the odd harmonica flourish. It’s a step into spaced out jazz lounge which sounds like nothing the band have done before. It segues (as most of the album does) into the twinkling O.N.E., which tricks you into believing it’s a ballad at first before morphing into a frazzled out psych jam. King Gizzard’s way with microtones is on a whole new level on this album, and you can definitely tell that they’ve now figured out what works and what doesn’t. While K.G. was rife with experimentation, L.W. forms a more cohesive whole with sonic experiments that sit far closer to home. Pleura‘s prog tendencies underpin grisly lyrics which reference necromancers and…Jenga, while the Ambrose Kenny Smith-helmed Supreme Ascendancy flirts with oriental melodies before Smith’s vocals do their best to give you goosebumps. “How can you get away with a murder?” he sings on the album’s outright highlight, the conviction in his voice clear. “You’re not above the law, no matter your beliefs” he snarls in the chorus, one which is underpinned by haunting organs. Supreme Ascendancy is dark, gritty and downright masterful from the Aussies.

Static Electricity sounds like it’s shrouded in mystery at first, a sonic haze eventually finding itself accompanied by a menacing acoustic guitar melody. There’s a real punch and swagger to Michael Cavanaugh’s drums once they kick in. Cavanaugh (or ‘Cavs’, as fans call him) manages to hammer home Static Electricity’s urgency with some fantastic drum work. It’s not the toughest track Cavs has played on, but that doesn’t take away from the fact that he really carries the song. East West Link starts off similarly mysterious, before eventually picking up the pace as frontman Stu Mackenzie sings of “highways like terminal airways”. There’s an air of futurism to the lyrics, contrasted by jangly microtonal guitar lines which weave in and out of one another like snakes.

Ataraxia – sung by guitarist Joey Walker – is equally rhythmic and well-paced, occasionally retreating into proggy territory. Ataraxia is defined as a sense of ultimate calm and serenity, and although it’s not a calm song by any means it’s definitely one of the more laid back cuts on L.W., placing more emphasis on a soaring chorus which will become a fan favourite live. Penultimate track See Me is L.W.’s final stab at going ham, and when the band pull this one out of the bag live it’s likely to be a rowdy one. “How can anybody see me when I am invisible?” asks Mackenzie over a mix of intense xylophones and fast percussive passages.

See Me’s melody line is as hypnotic as it is pulsating, a perfect combination and one of the high points on the album. It’s the perfect prelude to King Gizzard & the Lizard Wizard’s most monstrous album closer to date: the (titular) K.G.L.W., a nine minute stoner metal-slash-doom rock behemoth. It’s the musical equivalent of fifteen sledgehammers bursting through the walls of your brain. At first it takes its cues from the K.G. opening track of the same name, teasing you with its guitar line for thirty seconds before coming at you with chugged guitars and vague vocals. The lyrics? “K.G.L.W.” for the most part, with some claw-referencing musings here and there. Five minutes in the track changes tack and heads into Metallica-territory underpinned by light sirens, before eventually coming back down to earth, crushing and pulverising everything in its wake. There’s no gust of wind or easter egg to close out the record, closing the chapter on these last two albums and leaving you with a sense of fulfilment.

Whereas K.G. centred heavily on experimentation, L.W. took what King Gizzard do best and turned it into a cohesive whole. It comes much closer to what the band did on 2017’s Flying Microtonal Banana, yet it finetunes their initial microtonal explorations into an album full of rhythmically intriguing percussion (East West Link, Ataraxia), soaring choruses (Supreme Ascendancy), grooves you didn’t know the band could produce (If Not Now, Then When?) and – of course – powerful metal (K.G.L.W.). Much like its predecessor, L.W. is the kind of album which will take a little bit to grow on fans, but a few years down the line you’ll probably be ranking this one up there with the Nonagon Infinity’s and Polygondwanaland’s.  How does this album slot into the Gizzverse, though? Well, we’ll leave that up to you… L.W. is due this coming Friday (26 February) via Flightless Records.