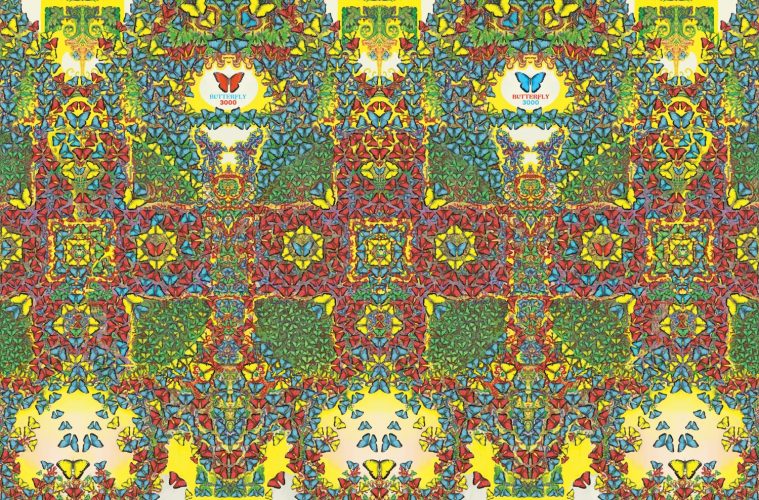 Life is a beautiful thing, but in times like these it sometimes becomes all too easy to get lost in the fog and lose your sense of direction. The modern world can be a mess, but once you sit back and take a breather it becomes a lot easier to untangle and process. On new album Butterfly 3000, prolific six-piece King Gizzard & the Lizard Wizard do exactly this, ditching everything which has made them who they are and replacing it with an abundance of synthesisers, dreamlike soundscapes and an outlook on life which lives and breathes positivity.

The band announced well in advance that Butterfly 3000 would have no singles. In fact, even the artwork and tracklist evaded most of us until release day. Their choice to avoid singles is instantly rewarded, with any and all expectations replaced by one thing and one thing only: hype. It’s a level playing field, and the danceable Yours kicks things off by creating a dreamlike soundscape which could have just as easily been written by fellow Aussies Pond. Mackenzie doesn’t often feel the need to use falsetto, but along with synths én masse and robotic percussive passages it’s one of the three staples to nearly every song on the album. The second half of Yours features a handful of classic Gizz-isms (harmonica flourishes and a brief jam), but the synthesizer truly is king. Shanghai is reminiscent of Gorillaz in places, with Mackenzie and Ambrose Kenny-Smith alternating vocal duties over a sonic haze akin to the smog which cloaks the city it’s named after. Had the record been spearheaded by a single, then Dreams would have probably been first choice. It’s got everything a great dream pop song has: catchy lyrics (with Gizzverse references: “I only need the castle in the air“), a captivating melody-slash-motif and an overwhelming sense of joy which initially overpowers you before settling.

Blue Morpho is where the first leftfield moment on the album, utilising the synth line which Dreams ended on and sending you to a rave in the middle of a botanica garden. Acid house synths fly into one ear and float out of the other while a simple drum beat elevates the song to another level. Blue Morpho bears the hallmarks of something you’d hear in a sweaty basement at 4am in the morning somewhere on the wrong side of town. Interior People is the closest King Gizzard come to actually sounding like their previous selves, briefly shifting the focus away from synths and placing it on acoustic guitars. Guitarist Joey Walker takes the helm, referencing agriculture (“failing farmers, toxic crops“) and paradigms as the song slowly morphs from a semi-acoustic folk jam back into a synth-led dance party. There are very subtle hints of microtonal acoustic guitar as the song progresses, building up for a big finish which is equal parts ethereal and straight-up fun.

Catching Smoke‘s opening lyrics put Mackenzie in a most important position (“Open the door doors to the oval office. In this story I’m president.“), although it eventually becomes clear that the lyrics are littered with LSD metaphors. “I’ve got happiness inside my pocket. It cost me 25 dollars” sings Mackenzie during the chorus on Butterfly 3000’s longest track, his voice lathered in effects. There’s handclaps, “woo” chants and an overarching sense of happiness that picks up where Dreams left off and carries on through to the very end. Arpeggio-led synths briefly threaten to go all Blue Morpho on us before a grandiose and uplifting finale. The quirky 2.02 Killer Year picks up where Catching Smoke’s arpeggios left off, changing their tone ever so slightly to complement 2.02’s happier overtones. Michael Cavanaugh’s drumming – often relegated to more robotic passages but still intricate as ever – shines here, creating a shuffling backbone for a lilting mix of wispy synth flourishes and pandemic-referencing lyrics (“The year that broke our broken wheel” declares Mackenzie).

Black Hot Soup may not be the spiritual successor to deep cut Vegemite, but as food-related Gizz songs go it definitely scores high. It follows a similar sonic formula to Interior People, the synths finding themselves pushed to the back as they create a bubbling undercurrent which threatens to take over from the folk-y acoustic guitar jams at any given moment. The ending sounds like something that could have been a darker moment on popular 2017 album Polygondwanaland, fusing menacing guitars and pounding percussion to make way for penultimate track Ya Love. This one is nothing but fun, and it’s perhaps the best song on the album. There’s those perfect chord progressions, happy-go-lucky musical passages and some of the band’s cheesiest lyrics to date, and it works a charm. Love and positivity have been recurring themes throughout the album, and they both come to a head on Ya Love. “I can’t wait to go to some place with ya. I can’t wait to go on adventures” – aww. “Ya love is like a dream inside a dream” – double aww. Title track Butterfly 3000 puts the record to rest with more arpeggios, Mackenzie’s echoed vocals floating through space and time as you fall back onto your bed after the best night of your life. It’s a fragile and beautiful finale, slowly piling on the layers until acid-laced synths and drum machines signal the end for album number eighteen.

There’s plenty to unpack on Butterfly 3000, both in its lyrics as well as its layers. Love, growth and introspection are common lyrical themes throughout, often cloaked in metaphor. Some of them are more obvious than others, but they all circle back to the same motto: love a lot, allow yourself to grow and – perhaps most important of all – never forget that it gets better. Arpeggios are a recurring motif throughout, popping up all over the place. Despite their prevalence, it never feels forced; in fact, they play an important role in connecting all the dots and allowing room for the band to create endless layers around them. As the album progresses it also feels as though the individual tracks are their own layers, piling atop one another as each song carries that extra bit of intensity before bursting. Or, to put it metaphorically, like a caterpillar blossoming into a butterfly. There’s turbulence along the way, but at the end of the day it’s beautiful.