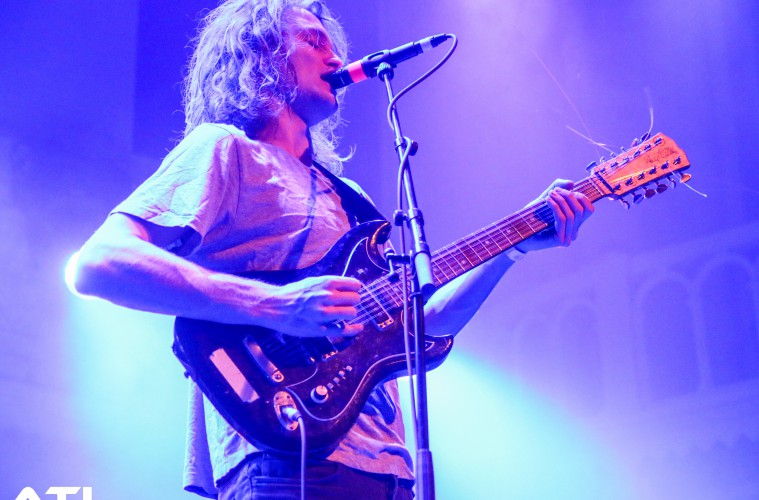 Every now and then, a band comes along who manage to blow all pre-determined expectations out of the water. Melbourne septet King Gizzard & the Lizard Wizard are one such example, blending frazzled psychedelic rock with music from all walks of life, including but not limited to country, jazz, garage rock and heavy metal. Last night, the group’s continued reign set foot inside Amsterdam’s legendary Paradiso for a sold-out night of revelry and reckless abandon, both of which were in support of new album Nonagon Infinity. Iguana Death Cult joined them for the ride. Dutch krautrockers Iguana Death Cult warmed the room up for a solid thirty minute set, one which drew heavily from their as-yet-untitled debut album. Encompassing a raw mixture of surf-punk with elements of garage rock and melodies which would make even Mac DeMarco jealous, Jeroen Reek and co. proved their worth in front of a half-full Paradiso. Sure, there may have been a line up until the nearby Hard Rock Café outside, but the lack of people didn’t stop Rotterdam’s Iguana Death Cult from setting one foot in the door of success. As young bands go, Reek and co. definitely look set to go far. Half an hour later, the majestic King Gizzard & the Lizard Wizard took to the stage. Performing in front of a sold-out Paradiso didn’t seem to faze them that much; rather, they took the opportunity to turn the venue into an intimate sweatbox worthy of the craziest of nights. The band are currently touring the world in support of new album Nonagon Infinity, which is essentially one long jam split into nine parts that just never seems to end (its final track, Road Train, even segues straight back into opener Robot Stop). Although the record itself knows no bounds, its live presentation goes to even wilder extremes by incorporating the band’s vast back catalogue into a show which basically became a 90-minute long jam session. An opening salvo of Robot Stop, Big Fat Wasp and Gamma Knife segued manically into People=Vultures and Mr Beat as Nonagon Infinity’s first five tracks caused plenty of chaos. From the moment Robot Stop kicked into first gear, pits erupted far and wide as crowdsurfers descended off of the legendary venue’s stage. The band didn’t seem to care too much about crowdsurfers, instead going wild themselves as they tried to pull off a never-ending jam session. New tracks Lord of Lightning, Barrel Roll and Grumbling Castle played testament to the fact that Stu Mackenzie and co. never sit still, having already thrown new tracks into their live set a mere five months after releasing Nonagon Infinity. It wouldn’t be all too surprising if the workaholics put out another album before the year was out, something which keeps in line with their knack of putting out at least two records per year. In the context of King Gizzard’s previous output, Nonagon Infinity is a metal-infused behemoth which doesn’t sit still one bit. Elements of AC/DC and Black Sabbath are rife for the duration, having been mixed with King Gizzard’s hallmark musical elements such as long-winding jams, emphasis on flute and a subtle love for harmonica-led weirdness. All three combine well to produce an album which is equal parts raucous and visceral as it is catchy and manic. Album highlight Evil Death Roll really comes to life onstage, with following tracks Invisible Face and Wah Wah having been infused with older track The River, a ten-minute long acid jazz opus. You’d think that the band eventually get tired of jamming the same songs onstage; on the contrary, though. Nonagon Infinity is an album which lends itself to onstage improvisation, something which eventually gave birth to three new tracks and the ability for Mackenzie and co. to blend older cuts into their never-ending journey. 2014’s I’m In Your Mind Fuzz jam lasted some fifteen minutes, blending the record’s four opening tracks into one frenetic presentation of wistful riffs, pulsating rhythms and sliced up harmonicas. Last year’s Trapdoor also featured, proving to be one of the show’s more laid-back tracks as double-drummers Eric Moore and Michael Cavanaugh seemed to engage in a subtle drum-off. You have to praise the pair for their skill, because it certainly isn’t easy to keep up the pace they maintain for a whole ninety minutes whilst still remaining perfectly in sync with one another. Juggernaut set closer Road Train comprised of AC/DC-worthy chugged riffs and a grisly set of verses, both of which intertwined to ensure absolute carnage once the track headed for its finale. Its finale incorporated elements of 2014’s Hot Water, with Mackenzie’s flute making another appearance before a brief reprise of Robot Stop brought the whole evening to an end. For more than ten minutes after the show ended, fans were still demanding a well-deserved encore. This isn’t all too surprising, though, because King Gizzard & the Lizard Wizard have (in Holland at least) managed to claim a huge victory for underground music by selling out a huge venue a la Paradiso. It might not happen again, and they may just be a hype band with a fun name, but King Gizzard & the Lizard Wizard are one of the world’s best live bands right now and they are not afraid to keep on touring until everyone knows it. A new album is already in the works, meaning that it’s only a matter of time until Stu Mackenzie and his men get to dominate stages the world over once more. Nonagon Infinity didn’t just “open the door”; rather, it knocked it down with one extremely fierce kick. Nonagon Infinity is out now.