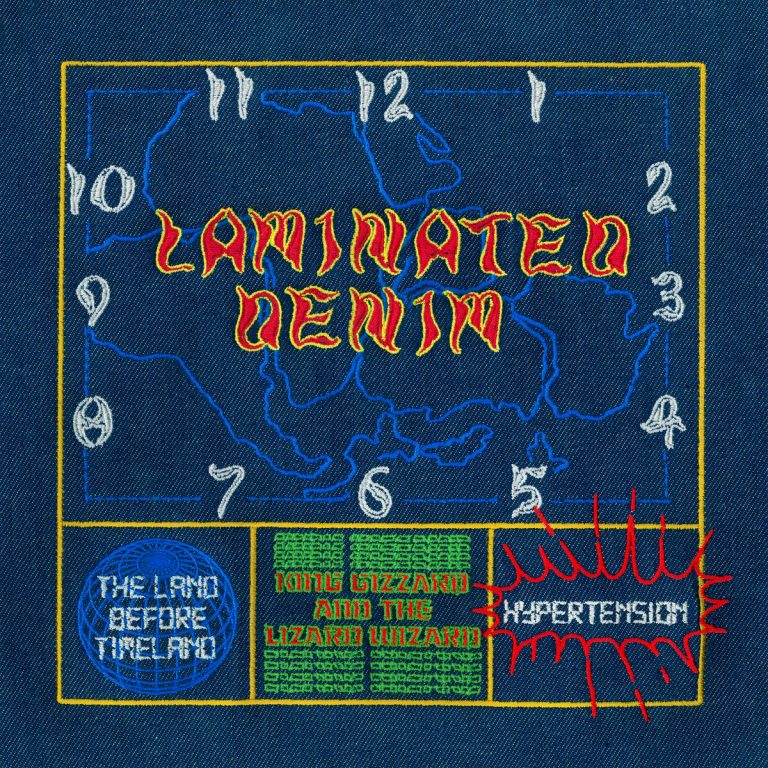 They just don’t stop, do they? They just don’t bloody stop. King Gizzard & the Lizard Wizard‘s 22nd studio album, the sprawling epic Laminated Denim, will drop a mere four days after its predecessor Ice, Death, Planets, Lungs, Mushroom & Lava (which comes six months after its own predecessor, Omnium Gatherum). Stu Mackenzie and co. are on the cusp of releasing five studio albums in one year (yes, again), a feat they achieved back in 2017 to critical acclaim. A lot has changed in the world since we were last treated to five albums in one year, with a pandemic-sized elephant in the room having at least somewhat of an effect on the birth of Laminated Denim. Its title serves as an anagram of Made in Timeland, the instrumental and vinyl-only album initially conceived in 2019 as intermission music for a set of massive shows at the Red Rocks Amphitheatre. We all know what happened next, with …Timeland eventually landing earlier this year. Laminated Denim – like …Timeland – consists of two songs each lasting fifteen minutes. However, that’s where the comparisons end.

You could consider Laminated Denim a companion piece to Made in Timeland when it comes to their individual set-ups and concepts, however where the latter delved deep into vague electronic experimentation (including some rampant techno), the former instead sees King Gizzard back in full band setting. Side A – The Land Before Timeland – touches on familiar territory with some bluesy harmonica and Fishing For Fishes-esque v i b e. It takes a while for the track to get up and running, eventually settling on a more subtle wavelength which allows the song to eventually morph into a space rock monster. Reaching its peak around twelve minutes in – and following an extended proggy jam – The Land Before Timeland slowly builds up until it reaches breaking point. Its dark, psychedelic undertones take the helm, awash with dreamy vocals, intense synths and a booming percussive drone which serves to connected the album’s two sides.

Side B is host to one of the best songs King Gizzard & the Lizard Wizard have ever written: Hypertension. Its fifteen minutes are filled to the brim with garage-y passages and uptempo percussion – sounding like a love child between I’m In Your Mind Fuzz‘s drawn out jams and Nonagon Infinity‘s relentless pace, minus the anarchy. Frontman Stu Mackenzie’s layered vocals add a different dimension to the song’s frenetic undertones, reminiscent in places of 2017’s Polygondwanaland. There’s definitely plenty of urgency in the delivery, particularly as things start heating up around three minutes in. The interplay between Mackenzie and guitarists Joey Walker and Cookie Craig are the centrepiece, serving as intricate companions to Mickey Cavanaugh on drums. In a recent interview, Cavanaugh claimed that Hypertension may well be his favourite Gizzard song to date; it isn’t hard to see why.

Once the song reaches its sonic orgasm (complete with a flute solo), it’s enough to give old school King Gizzard fans goosebumps for days. There’s nothing new on Hypertension, but if you’ve been a fan of King Gizzard & the Lizard Wizard long enough then it’s safe to say you’ll be far from disappointed. As the song crumbles and fades away, we’re once again greeted with the same booming drum beat which serves the same purpose Made in Timeland‘s ticking clock did. And then we go again. And again. And again.