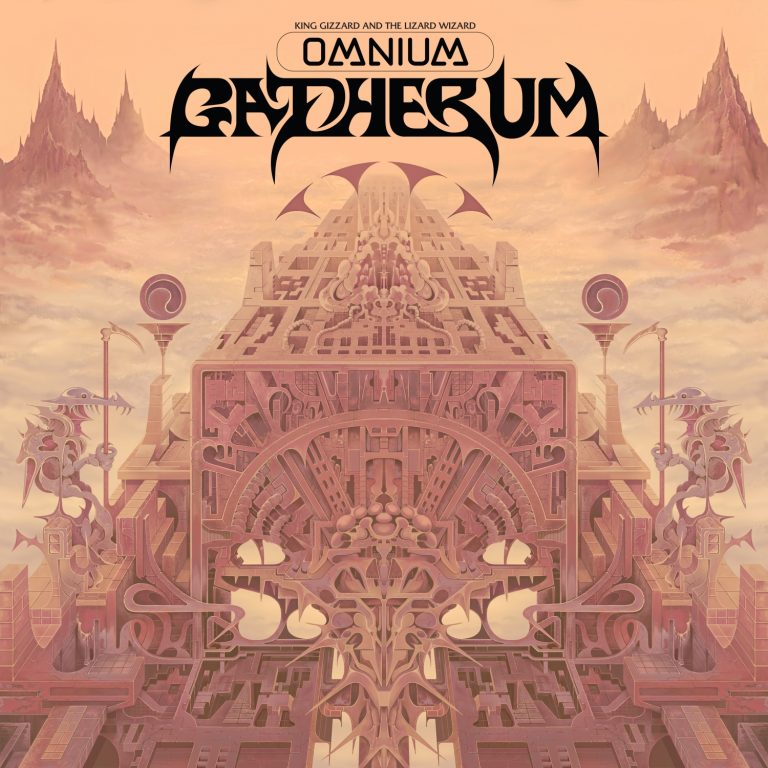 King Gizzard & the Lizard Wizard’s Omnium Gatherum: A Sonic Playground With Something For Everyone

If you’re wondering why you have an overwhelming sense of déjà vu, then fear not: you’re not alone. This coming Friday, King Gizzard & the Lizard Wizard will unleash their most ambitious and diverse record to date: Omnium Gatherum. The sixteen-track, eighty minute long double album is the result of King Gizz at their most explorative, and it’s the sound of a band who have found comfort in never being comfortable. Over the years, Stu Mackenzie and co. have dipped their toe in dozens of different genres, generally succeeding before moving on to the next experiment. Omnium Gatherum is unlike anything which came before it, jumping between genres, time signatures and subject matter at their own pace and in a way only they know how. It’s always been hard to define King Gizzard & the Lizard Wizard’s music, and Omnium Gatherum has just made it a whole lot tougher.

The record spans sixteen songs, making it their longest record to date with a runtime nearly that of a feature length movie. Had the album been a feature length movie, you’d probably spend far too much time explaining all the different plot lines. Opening track The Dripping Tap is an absolute behemoth, taking up a quarter of the album’s entire length with spastic garage rock flourishes, soulful vocals and enough guitar pedal fuckery to last a lifetime. It’s the result of a full band jam post-COVID, remaining uptempo and vicious as soon as multi-instrumentalist Ambrose Smith’s vocals fall away. It’s in a similar vein to 2016’s Nonagon Infinity, which you can’t say about recent single Magenta Mountain. The album’s second single borrows its synth tone from last year’s colourful Butterfly 3000, with frontman Mackenzie singing over subtle grooves and wispy melodies. It’s a strong track by King Gizzard’s standards, setting the bar stratospherically high for the fourteen (unreleased) songs to follow.

Does the rest of Omnium Gatherum match the quality of its first two singles? In short, yes. In fact, it only takes a few seconds for Kepler-22B’s smooth jazz undertones to surpass it. Michael Cavanaugh’s percussion are the backbone of this track, remaining prominent enough to add distinct grooves but never overdoing it. Mackenzie and guitarist Joey Walker engage in quirky vocal harmonies and loosely structured call and response as seedy lounge bar vibes enter the frame thanks to some smooth piano work. There’s plenty to dissect, even if the song at its core sounds like it may be pretty straightforward. Then again, when have the King Gizzard guys ever been straightforward? Prog metal juggernaut Gaia has long been anticipated by fans, and the studio version certainly lives up to the hype created during live shows. It’s a monstrous slice of noise which borders on thrash metal territory, complete with throat shredding vocals from Mackenzie. If 2017’s The Great Chain of Being had been on the band’s manic Infest the Rats Nest (2019) album, it would sound a bit like Gaia – soaring solo and all. It’s taken King Gizzard & the Lizard Wizard just four songs to throw plenty of curveballs at the listeners, jumping from garage rock and psych pop to experimental jazz and prog metal in just half an hour.

Ambergris (named after a substance found inside Sperm Whales) dips its toes into soulful territory, serving as perhaps the first truly sexy Gizzard song. The funk is ever present throughout, echoing Thundercat in places whilst still sounding quintessentially Gizz. There’s an effortless sense of nonchalance which Ambergris never lets go of, even when its mouthwatering finale abruptly calls it a day in order to let Sadie Sorceress confuse fans even more. It’s the first time we’ve ever heard Stu Mackenzie rap, but it works. Cavanaugh’s hip hop beats and a collection of wah-heavy guitars form the backbone, with occasional synth melodies adding a modern flourish to proceedings. It sounds like The Avalanches covering Grandmaster Flash in his heyday; this may sound odd on paper, but boy does it work against all the odds. Evilest Man removes all happiness you may have picked up during the previous two songs, employing pulsating synth patterns and Mackenzie’s classic “woo!” chant for another foray into psych pop. The band sing of (you guessed it) an evil man, questioning his actions and wondering how long his arms must be to “span the distance he can reach”. The halfway point allows for Evilest Man to enter jam-mode by way of sickly sweet synth melodies, all of which seem to be working in harmony while Cavanaugh’s shifting percussive passages provide rhythmic backing. Cook Craig takes the lead on The Garden Goblin, a curious slice of obscure dream pop highlighted by dreamy melodies and Craig’s unmistakeable (and often overlooked) voice. It’s become a recent favourite during live sets and it isn’t hard to see why, with an ever so slight hint of Animal Collective-esque quirkiness adding yet another new dimension to the band’s sonic palette. Fellow fan favourite Blame It On the Weather is perhaps the poppiest and most accessible song on the album, with Mackenzie and Smith alternating vocal duties over a combination of dreamy keys, shuffling drums and wavy guitars. The classic elements of psychedelia seep through the cracks here and there, giving Blame It On the Weather this vintage yet nostalgic feel.

King Gizzard & the Lizard Wizard have never shied away from making music which urges you to shake your hips (albeit unintentionally), and on Persistence they take this to the next level. King Gizzard have never sounded this groovy, operating on a sleazy wavelength spearheaded by slick vocal harmonies and double drumming passages aided by Cavanaugh’s wife, Amy Findlay (of Stonefield). Beastie Boy-esque The Grim Reaper is the closest the band have come to recreating the party starting chaos of 2020’s Intrasport, with Ambrose Smith rapping in and among a mix of Arabic flutes, erratic urban beats and subtle microtonal guitar lines. Presumptuous places Ambrose centre stage for a soulful outing akin to 70s soul and lounge music, allowing guitarist Walker to whip out the flute as the drums flitter between laid back and upbeat. By Gizzard standards, Omnium Gatherum has an uncharacteristically high amount of happy songs, a trend the band dispel on the thrashy Predator X. It’s four minutes of pent up aggression, complete with gnarly vocals, drop-B guitar chugs and overwhelming sense of impending doom onset by a snare drum which sounds like it’s trying to shoot you. It ticks all the thrash metal boxes, harmonics and all. Red Smoke heads down a far less vicious route, opting for wurlitzers and shuffling percussive passages which serve as soothing accompaniment for Smith’s sultry vocals. As has been demonstrated on multiple occasions throughout this album, Gizzard have grown a real penchant for dreamy psychedelia. Ambrose’s vocals almost feel like a cloud, swallowing you whole while you sit there and take it all in. Penultimate track Candles is a perfect slice of psych pop, with beautiful harmonies demanding your attention. It borders on yacht rock in certain moments, Mackenzie’s voice without a care in the world. If Candles doesn’t make you want to sway from left to right with a cocktail glass once its funky finale enters the frame then you’re doing it wrong. Candles is one of the highlights on this diverse album, leaving The Funeral to call the curtain on eighty wonderful minutes. It’s a finale laden with hints of microtonal music, fully instrumental for its brief run time as its focus remains on guiding two jangly guitar lines to the finish line. You kind of have to call the end of this album a finish line, even if the time really does fly by on a full listen.

Fans will likely conclude their first listen of Omnium Gatherum with more questions than answers. At eighty minutes it’s the kind of listen which really demands your attention, but at the end of the day it’s worth it. Its sixteen songs perfectly highlight the band’s ability to hop genres without a) fucking it up or b) losing sight of themselves. It may not have the feeling of an instant classic which previous albums Nonagon Infinity and Polygondwanaland had, but over time it wouldn’t be surprising if Omnium Gatherum was the album fans used to introduce their friends to King Gizzard & the Lizard Wizard. Nearly every facet of the band’s diverse skillset is touched upon, from garage rock and psych pop to thrash metal and a whole spectrum of soul, jazz and RnB. You may need some time getting into it, but by the end you’ll be glad you stuck around for the ride. Omnium Gatherum comes out this Friday (22 April).