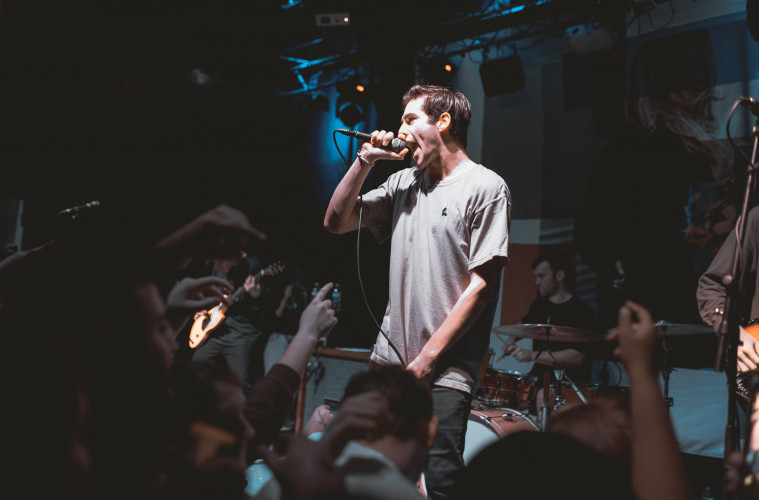 As Anieck van Maaren was setting up to call Knuckle Puck’s vocalist Joe Taylor on the United States’ Election Day, it was nearly noon in the band’s hometown of Chicago, IL and polling stations opened just hours before. The vote for the next president is the big game changer in an already tumultuous year, which also saw Knuckle Puck release their third studio album (aptly titled 20/20) just over a month ago. Van Maaren Zoomed Taylor to talk about the new album, the restrictions brought in by COVID-19 and what it’s like to be a first time voter.

Let me start by asking: how are you? How is life treating you?
Pretty good actually, we just did a drive-in show on Halloween so it was cool to get out and finally play a real show. We did a livestream thing recently and that was cool but there was no real interaction with… humans. It was really cool to get out there and know that people were seeing it in real life, right there on the trunk of their cars, and that honestly made up for everything.

Your shows are known for their good vibes, and with that comes some good moshpits. Were there any drive-in equivalents of that?
I heard that a few people were crowdsurfing off the hoods of their cars. I think they were just doing it as a goof but it seemed really cool!

Your album 20/20 has a really uplifting mood to it and comes as a welcome distraction from life as we know it. Most of it was written pre-COVID, so where did its themes and ideas come from initially?
It’s funny that you mention the vibe at our shows, because that’s where it came from. Nick Casasanto (Guitar) and I were talking one day and we were saying that we have such a good time playing shows and we just wanted to make music which really reflected that. Shapeshifter (2017) to me was kind of an angry, frustrated album and so the good vibe at our shows is one thing but those lyrics are another thing.

I feel like 20/20 is, in a way, more emotionally mature and less self-deprecating than some of your earlier albums. This album’s message seems to be more, “I’ll let you do your thing and I’ll be over here having a good time.”
Exactly, one hundred percent. Nick and I always touch base before we start writing and we discuss what we want to get across. I think a part of those more emotionally mature perspectives if just from us growing up. I’m 27 now, Nick’s 28 and we’re not 23 anymore. So it’s like you said, let things be and I’ll be over here existing the best way I can be. It’s like our song Breathe; we wrote it in the mindset of ,“imagine you were giving advice to your friend or your brother, what else would you kind of put around it.” A lot of our lyrics came out of those kinds of conversations.

Did the COVID-19 pandemic influence the process of writing and recording the album at all?
We finished recording it halfway through January, and then we had it mixed and mastered a month later, so it was all done before the pandemic hit. The only thing the pandemic influenced was the release date, because it was supposed to come out in June. We ended up releasing more singles, because we literally wrote this as a fun summer album. We wanted to put out the summer songs throughout the summer. But yeah, it had nothing to do with any of the lyrics.

It’s interesting to see that in hindsight some of the songs may actually have a deeper meaning because of what’s going on right now.
It’s honestly crazy, because listening back to it I’m finding a lot of new things in even the words that I wrote where I’m like “wow, I didn’t mean it like that but it is like that.” Which is crazy because sometimes I’m still figuring out what my own songs are about by listening back. People may get one thing out of a song which is totally not what the songwriter meant, but that’s the beauty of it. You can get your own meaning from it and you can come back to it years later with more life experience and think, “oh wow, I get this now.”

Speaking of meanings and messages in your music, today is clearly a big day in the US. Knuckle Puck doesn’t tend to get political in their lyrics, but what lyric off the new album do you think should shine through today?
The one that comes to mind, even though it’s not a political line, is a line on 20/20: “if it’s easier, then close your eyes / but know that you can never see the light.” Basically what that means is that it’s definitely easier to close your eyes and not look at the things you don’t wanna look at, but if you don’t open your eyes and see what’s going on around you, eventually you will and you’re not gonna know what even happened, whether it was good or bad. I feel like a lot of people wanna close their eyes to things they don’t wanna see, but if you can’t reflect on the bad things, you can’t reflect on the good either.

How are you feeling about the election in general? Us Europeans are looking on just as anxiously.
Honestly, it’s really crazy and it’s… it’s just fucked up. This election I was a first time voter. All the guys in Knuckle Puck have voted this year. The last election was obviously very important and it didn’t go the way that people had planned. It had the highest amount of people that just did not vote, with 45% of people being non-voters, and I was one of those people. I was 23 and I kind of like “dude, none of this stuff is real.” I thought Hillary was gonna win anyway and that my vote wouldn’t matter. And, wow man, what a lesson that was for the entire country and the world. Like I said, it’s fucked up.

The title of 20/20 is a wordplay on having perfect vision, and on the title track where you sing “I can’t tell you the future but I know that it’s coming.” What vision would you say you have for the upcoming year?
Thus far, for me personally it’s been a year of personal growth, self-reflection and, honestly, self-nurturing. There’s a lot of things I’ve wanted to do for a very long time which I’ve only done now that we’ve been locked down. I started to learn piano. I can’t read music or anything but I’ve been learning chords, just getting more comfortable with it, and I’ve been writing a lot of music. I feel like a lot of people can relate to that feeling of just being stuck inside and self-nurturing not only your goals but also the things you’re passionate about, or the things you want to be passionate about. So for the time ahead I hope that people will still self-nurture and have personal growth on a consistent scale, because I feel like I should’ve been doing these things a long time ago. Obviously I hope touring can come back and all that can go back to normal, but I really hope that people have used and continue to use this time as reflection, because at some point we might look back at all this time we had and then we’ll miss it. 20/20 is out now.