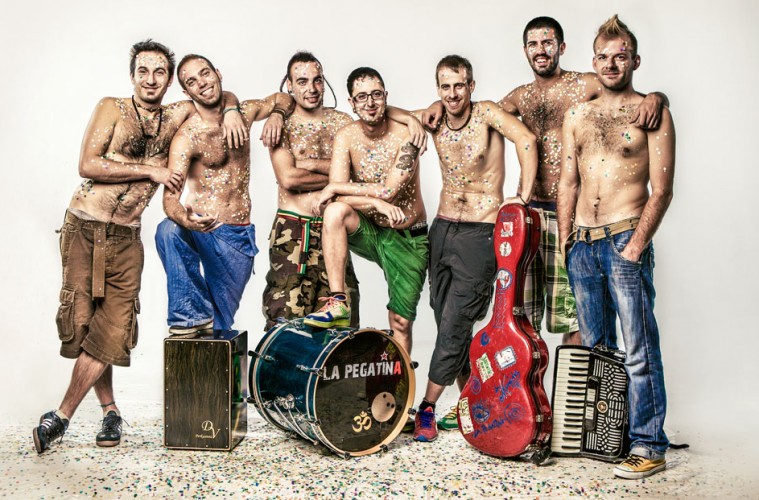 Party with a capital P. That’s exactly how one can describe Catalan group La Pegatina’s live show. The band, fronted by Adria Salas, bring various elements of urban rhumba, carnival music and all-round party elements to a table filled with surprises. Tonight, their Llovera yo Vere tour stops off in the Dutch capital of Amsterdam, for a 1,500-strong crowd at the Melkweg.

Taking to the stage just after 9pm, the band walked on one-by-one to the recorded sounds of Odissea, the short instrumental track from their 4th record Eureka, which surfaced last year. As they greeted the crowd and introduced themselves, 4 big confetti cannons exploded and each released tons of colourful confetti onto a very eclectic crowd who didn’t stop dancing for even a minute! Opening duo of Despierto and Lerei (which kicked off with a super catchy melody) began to build the pace up in a set which lasted nearly 2 hours, spanning a mammoth 34 songs and various little fun interludes. One of these fun interludes, taking place towards the end of the show, saw the band introduce their road crew one by one by getting them all to throw basketballs into a hoop. Get the ball in the hoop? Then it was up to the crowd to follow the bands lead and run from side-to-side to the tune of Follow the Leader. Once they got round to introducing the guys at the sound desk, it was up to the crowd to carry a massive basketball towards the stage, ready to be thrown into an extra-large hoop. It went in, and celebrations were venue-wide. It’s these little extra things which make La Pegatina’s live show so fun, particularly in countries such as Holland where carnival music is loved all around. This love of carnival music was particularly evident when the seven-piece proceeded to play Dutch carnival classic Er Staat Een Paard in de Gang (which is basically about there being a horse in your neighbour’s hallway), inciting a mass sing-a-long to one of the country’s most loved carnival songs. It’s perfect novelty value, another thing which La Pegatina’s live shows thrive on. Alongside the covers, the band also introduced themselves one-by-one, each playing a different well-known tune on their own instrument. This included versions of I Like to Move It (Move It), The Final Countdown and various other 80s hits which got the crowd dancing manically.

The live show obviously doesn’t just survive on fun bits and pieces and novelty covers, as the band also have an extensive back catalogue to choose from when performing. Tonight’s set was heavy on 2013’s Eureka, with the likes of El Curandero, Ara Ve Lo Bo and Llovera yo Vere being some of most well received tracks, as well as slower tracks Olivia and No Hi Ha Ningu. Earlier release Xapomelon was also represented by the likes of Chocholoco, La Sorrancherra, Lacon Con Grelos and Foxy & Billy, which featured Accordionist Romain Renard dressing up as his alter ego Foxy, serenading the ladies in the crowd with his entertaining attempts at seductive lyrics and sexual innuendo’s. The songs clearly do all bear loads of similarities, yet despite this predictable nature it’s just so much fun that you tend to forget that you’ve probably heard the same melody 3 times in one show! Big hit Mari Carmen appeared towards the end, with an extended trumpet section in the middle encouraging the crowd to go even wilder than they already were! Despite all of these highlights though, the biggest hit in the set came in the form of Via Mandarina’s Gat Rumberu. Its signature trumpet melody was repeated throughout the show, before its final run through culminated in even more confetti being launched from the leftover cannons. As the show came to an end and people were still cheering for the band, vocalist Adria Salas remained onstage to introduce the remaining 6 band members as they proceeded to walk into the middle of the crowd with percussion instruments. This led to a percussive version of Gat Rumberu, with 1,500 vocalists. It was a real sight to see, and certainly one that no one in the room will forget soon.

The whole show was truly remarkable by all means. Not only was the performance outstanding in itself, but the band also managed to get the Dutch crowd as active as they’d ever been, something which seldom happens in the country of tame crowds! When La Pegatina comes back, they can be very sure that it’ll be in a venue even bigger than the Melkweg, which seemed almost too small for their insane antics! Tonight’s show set a high standard, and it’s ready to be bettered next time they’re back on these shores!