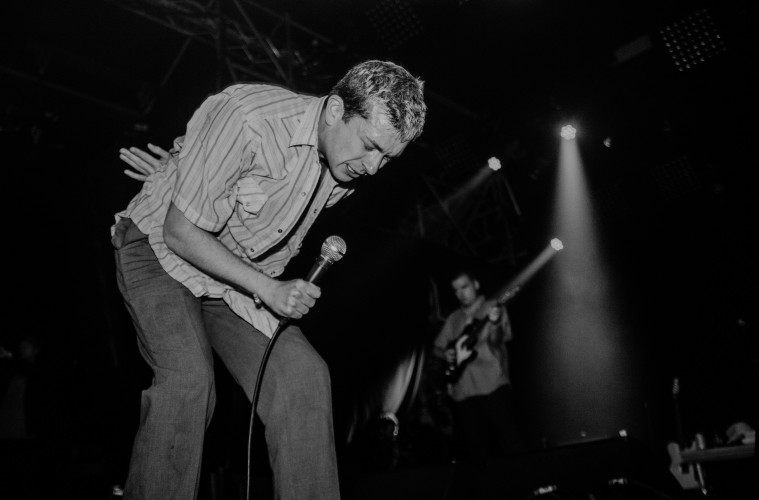 Entering and Leaving The Womb With Shame

It’s been a tough year, we can all agree on that. So imagine being in Charlie Steen’s shoes when he and his bandmates in shame completed work on hotly anticipated sophomore album Drunk Tank Pink just before the world shut down. The follow-up to 2018’s Songs of Praise is due in January, and earlier this month Steen (digitally) sat down with Jack Parker to enter the womb which birthed his band’s stellar new record.

Hey Charlie. It’s been a weird year. How have you been holding up?
I’ve been alright. You sort of miss playing shows and what was once called normal life, but I learnt that you can’t dwell on that and live in hindsight or the could-have-beens. I discovered the enjoyment of my own company.

The album was mainly recorded before the pandemic, correct?
Yeah, fortunately it was all recorded beforehand. We were in Paris talking about how great of a year we were going to have. Hahaha. But yeah, we’re very fortunate.

Did your view on the songs and the reality in which they were created change much as the world slowly closed down?
I think it was quite nice for us to take that break from the songs over lockdown and then come back to them a month or two later when we also knew more about how we were going to release the album, music videos and stuff like that. It was good and also necessary. It’s interesting looking at the album now, because its themes really resonate with the experiences I’ve had during this pandemic. This album is about isolation and learning to enjoy the company of yourself, and also being introspective. It relates to a lot of things.

Did you struggle at all from second album syndrome and the pressure which comes with putting out a successful sophomore record?
I think there’s always a sort of pressure because you don’t want to let yourself or anybody else down, and you always want to do the best you can. But whether those pressures are falsities or not is something you learn throughout the process. Without sounding too cheesy, I think there’s a moment when you hear the songs and you’re genuinely proud of them. Any external critique that clouded your vision drifts away, so no matter what anyone says you’re just happy with what you’ve done.

Tell me a little bit more about ‘the womb’.
The womb was my bedroom in an old nursing home in Peckham. At first it housed the washing machine, but we took that out, sanded down the walls and put in a plywood bed frame and bookshelf. It became my bedroom and I wrote a large chunk of Drunk Tank Pink in it. The room itself was pink, from the walls to the floor to the lampshade. Everything.

What about the circumstances which fuelled the writing on this album? Because I gather that you went through a tougher spell at the end of the Songs of Praise campaign.
The year before the first album, 2017, I had a lot of panic attacks and I was generally suffering from exhaustion and the like. I learnt a lot about myself, and so when we took a break at the end of the first album it was like jumping off a cliff. It was from one extreme to the next, all the restlessness and needing to adapt to a regular life which we missed out on. A lot of our adolescence and being an adult was spent away from home between the ages of 19 and 21. We had to learn to separate daily life from band life and enjoy our own personal company. I was able to repress all these thoughts and emotions for a long time because touring is such a distraction, but after that I was forced to confront them on my own.

Songs like Human, For a Minute and Station Wagon lyrically go deeper than most of the album. Tell me a bit more about the stories which shaped those songs.
Human, For a Minute was the first song we wrote for this album and its lyrics became the blueprint for what Drunk Tank Pink would become: identity and heartbreak. I never wanted to write about heartbreak until I experienced it myself, because it’s then that you realise why everyone has been writing about heartbreak for the last five thousand years. It was a very personal and intense song. I challenged myself for sure. Now we can show people this record but at first you’re doing it in front of four people you’ve known for most of your life. For them to know the context of it was daunting as you expose yourself in quite a way. It’s like getting back together in a relationship when you know it will collapse – and the joys and hopes of that time. Those are delusions you live in.

Station Wagon was my last conversation with myself which I wanted to close this album on. Drunk Tank Pink is a very introverted record, like a diary entry. Finishing on this made sense, and then following it up with a little ode to Elton John. Sean (Coyle-Smith, guitar) and me got obsessed with this one story where Elton John supposedly asked his personal assistant to move a cloud that was blocking the sun. It was a very Shakespearean height of egoism, and I loved it so much that I did a monologue about moving clouds.

You call this an introverted album. Does it also function as a reaction to the last two years?
Yeah. When I speak to mates in other bands I notice that everyone has similar experiences. People think you’re far more extroverted after touring, when in actual fact you withdraw yourself. Not in a depressing way; the whole concept of privacy is lost on the road. You might have time to yourself in the shower or if you have a hotel room, but most of the time you’re around people and being social. You really end up valuing your privacy and withdrawing yourself a bit more, and you also have to confront a lot of things that have been following you around. You’re left with so much to assess, analyse and think about when there’s so much silence.

James Ford produced the album. What did he bring to the table for you?
He’s fucking great. An amazing person, and an amazing producer. James is incredibly talented, he can play every fucking instrument and on this album he brought with himself this liberation to a lot of sounds we’d been delving into. We approached very relaxed and calm, and James was able to bring the conversation forward.

Songs of Praise was written while you were touring at a rapid pace. Would you say you approached Drunk Tank Pink more as a studio record as opposed to a live one?
Live is always in the back of our head, and the songs on Drunk Tank Pink do sound great live. Songs of Praise was definitely written for live but it also captured this whole ethos of how we were as youth and how they were the first ever songs we’d written. By playing live constantly those songs kept growing and getting better. On this album we wrote a part of the album in Josh’s bedroom as he and Sean had been learning about recording. We had more knowledge on stuff like percussion and synths, and we were also able to actually add this things to the songs. On Songs of Praise everything almost kind of went fast forward, and we couldn’t really slow down to focus on some things.

This album still sounds like Shame, but it’s like you’ve taken a deep dive down a sonic rabbit hole. The songs feel far more fleshed out and explored. When it came to piecing the songs together, was there anything in particular you wanted to achieve from the outset?
It all came quite naturally! We were never going to do a carbon copy of Songs of Praise, because that would be an absolute failure. When you play an instrument or perform something for so long you end up wanting to find a new way to express yourself. If you met an artist in 2018 while they were doing drawings, and in 2020 they still hadn’t moved on to painting it might make you wonder why that is. If they were doing 172 drawings a year you might start to wonder. I think it happens in any form of creativity; you just want to explore all of the various options and find the key to a different way of expression.

We’ve been in this mess of a pandemic for nine months now. Looking forward, what can the music industry learn from this situation? It seems to have exposed a bunch of flaws.
Oh, god. Yeah, I don’t know man. Fuck. Nobody was prepared for this to happen, and I do think that there were certain things like PRS which did a great job at giving out grants and fast forwarding payments. That support is important. But independent venues might be closing, and that’s my main concern. There’s going to be no more new music! I think it’s all about support and helping those who helped you. Drunk Tank Pink is due 15 January.