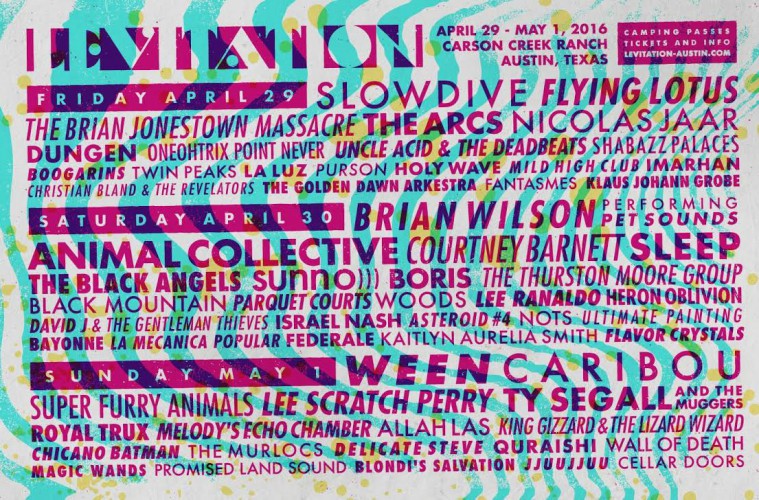 At the end of April, some 10,000 people will descend upon Austin, Texas for the 9th annual Levitation festival. Formerly known as Austin Psych Fest, Levitation will this year see stunning performances from the likes of Brian Wilson, Animal Collective and Courtney Barnett. We’ve taken a good, detailed look at this year’s line-up and selected the five must-watch performances in Carson Creek this year.

5 Ty Segall
It wouldn’t be a proper psych festival without a handful of hard-hitting fuzzy sets, which is exactly why Ty Segall is heading down to Carson Creek this year. New album Emotional Mugger is a grunge-laden masterpiece which has seen Segall go from strength to strength. His set at Levitation this year is likely to be nothing short of absolute carnage and chaos.

4 Sunn 0)))
Bring your earplugs with you, because Sunn 0))) will threaten to blow your ears off during their drone-heavy set. Generally performing on a stage cloaked in smoke and nearly no lights, Stephen O’Malley and co. will likely stun Austin to a point where even the local wildlife will sit still and ponder life for a moment. They might not be the most musically innovative group out there, but they’re sure as hell able to draw you in and never let you go.

3 Black Mountain
Canadian outfit Black Mountain released their long-awaited new album IV last week (read our interview with keyboardist Jeremy Schmidt here), with its expansive range of influences more than likely set to echo through Carson Creek in scenes of serene beauty. Album opener Mothers of the Sun, which is formerly a jam track, may well be one of the most hypnotic tracks of the year, making itself perfect for Levitation.

2 Animal Collective
New album Painting With has just been released, with Animal Collective having put out one of 2016’s most interesting records so far. It may have extended itself to the off-the-wall likes of FloriDada and Golden Gal, but it puts the outfit in a position which opens plenty of more mainstream doors open for them. Their show in Austin later this year will likely be extremely packed, something which their exciting live show has played a definite part in. Be there or, well, just miss out and drown your sorrows with an alcoholic beverage of choice.

1 King Gizzard & the Lizard Wizard
If there’s one thing that you absolutely cannot miss at Levitation this year, then it’s King Gizzard & the Lizard Wizard. The Aussie septet are on the verge of releasing new album Nonagon Infinity, with the record set to come out right before their set in Carson Creek. Its nine tracks are all interconnected and serve as one hell of a manic journey which draws influences from psych-infused heavy metal and in-your-face garage rock. Throw in two drummers, a selection of flutes and harmonicas and Stu MacKenzie’s warbled vocals and you have a record which deserves to be played live in its entirety in front of (preferably) an audience who go batshit crazy at all costs. Nonagon Infinity isn’t out yet, but it’s already one of the best records we’ve heard this year. Make sure you check out their set in Austin this year to see exactly why King Gizzard are so spectacular in every sense of the word.