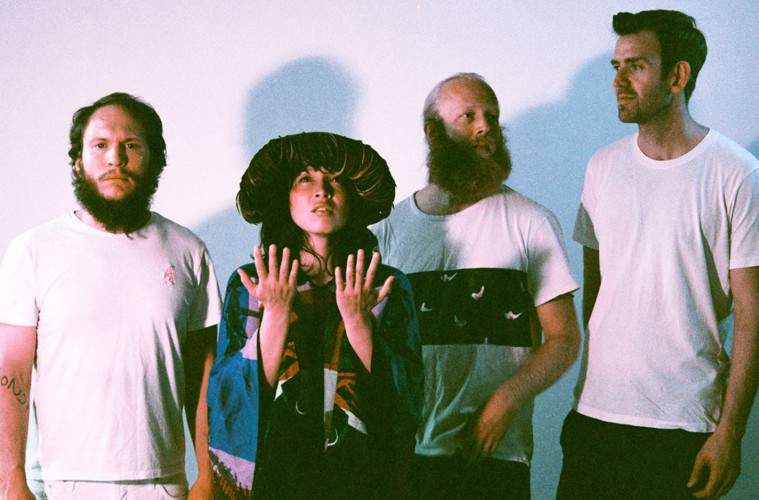 If Little Dragon‘s brand new album Season High is anything to go by, then you could suggest that the Swedish quartet certainly don’t do things by halves. Yukimi Nagano and co. have spent the last three years hammering away at their most eclectic and out there record to date, one which also harks back to the Gothenburg outfit’s early days in more ways than one. In the midst of their European tour, we called up drummer Erik Bodin to discuss working with outside producers for the first time, his perspective on European culture and the band’s visual identity moving forward.

Hey Erik. How are you?
I’m good thanks!

Have you had any time to check out Amsterdam today?
Just a little bit. I woke up a few hours ago and had a little bit of a walk around, but it was raining so I went back inside, haha.

Your new record Season High came out in April. Can you tell me a little bit more about the period leading up to its creation, as well as the studio process itself?
Well, it was the second record that we made with this label set up that we had. We came out of the Nabuma Rubberband sessions (2014) and toured a lot, but at some point we just got restless and wanted to write new songs. We stopped touring, went home and just made a record. We wanted to go back to a time before we even had a label, when none of us thought about any opinion but our own and how we were just very high on our own music. We’ve always had our own studio, and during the Season High sessions we were there every day, day in day out. We were there daily, and one or two of us would sit down and write a song; it would work very much like that. It wasn’t always us being together at the same time in the early stages, but after we had a lot of songs we got together and chose which songs to work on. I think it was a period of half a year where we finished the songs, drank a lot of coffee and disagreed on different things. We wanted to try and see if we could bring someone in from the outside, so we tried a few producers and the one we worked with the most was James Ford. He came and worked with us, and also mixed the album. It was definitely a very new thing for us, to bring in a new person.

What did James bring to the table from a production point of view?
I think he kind of gave us confidence. When you’re in your own bubble, you tend to avoid being too analytical, but you always end up there. James was very quick in giving us our confidence back and telling us what was great; he also gave us loads of suggestions. He basically unified us, while also helping with the mixing. He has a very similar taste in music to us, which helped us all click.

It was also the first time you’d worked with outside producers. Why, of all times, did you make the switch at a time where you also wanted to capture your pre-label sound?
The label we worked with was always encouraging us to try and see if there was any benefit to working with someone else, but we’ve always been insecure and stubborn as a group; we didn’t want to relinquish control to anyone else! It was a good try out, and the aim for us was really just to see if we could work with someone else. For us, it has to be meaningful. We want to learn something as well, as we’ve always been very driven. When James’ name came up, it was a very easy decision to make; we trusted him.

When you initially entered the studio, did you have a particular vision or goal in mind which you wanted to achieve?
Yeah. Usually we don’t have any concepts or ideas when we start, because we’re more inspired to experiment and see where we can go with it. That’s always the main thing, to find something else. When you get into it and gather enough songs, you then get to the point where you have all the ideas of what you want the album to be. One of the things we wanted to do was to go back to the vibe of our very first album (2007’s self-titled effort), where everything was very homemade and beared a sense of generosity, a feeling of coming up with your own ideas and not over-polishing everything. That just makes it boring, haha. We wanted to go back to that demo sound, the good demo sound, if that makes any sense.

And how much do you think the creative process would affect you had you worked on this album away from your Gothenburg studio?
I don’t know. I’m sure it would put us in a different mood, though. I don’t think we could bring all the synths and gear that we have to a new studio, but the music would definitely sound different. Somehow I don’t think it would differ that much, though. It’s not like we’re walking in the rain all day every day and only writing about rain. The outside doesn’t really affect us too much, it’s more of an internal journey.

Your European tour is in full swing at the moment. How’s it been so far?
It’s been great! We’ve spent so many tours in the US, so over the years I always thought that European crowds were a bit slower, and not as expressive in their appreciation when compared with an American crowd. Now, however, I feel like I have another angle to look at it from. For the most part, European crowds are very polite whilst also being very into the whole performance. We’re more line with European culture than we think, but I always thought that the crowds would be so boring. Like, where they cross their legs and expect entertainment. I used to think that European crowds didn’t give back that much, but now I see that they’re far more deeply concentrated and really absorb things well. That’s been good, and there’s also been a lot of people coming down to the shows.

Your current live show is also quite captivating from a production perspective; what ideas went into producing it?
It’s a field that we haven’t really spent too much time deepening ourselves in over the years, but more so across the last two albums. On this record we worked with a Swedish lighting designer called Jovias, and he worked on a whole concept of having reflecting objects on the stage. It’s really nice! Of course, it’s hard to see everything when you’re onstage, but from the crowd and from in pictures we’ve seen, it looks very massive and intense. It’s always nice to work on something in another creative field alongside music. Even the clothes we wear, for that matter! We worked with a clothing designer from Gothenburg, and she made clothes specifically for us to wear on this tour. The clothing gives light depending on the different materials used. We’re taking it as far as we can, even though the music should obviously speak for itself.

The videos also maintain a strong visual identity; what ideas and processes went into it this time round?
Our approach to video has always been to make something that we’d enjoy watching ourselves. On Nabuma Rubberband, the cover features a girl who we don’t even know. However, we love the picture and admire the artistry behind it. We loved all of the people involved in that record. On Season High we wanted to go back to being generous, and it’s the first album cover which shows our own faces. It has a lot to do with confidence! We wanted to take all the different aspects of Little Dragon somewhere very interesting, and now we’re confident enough to do that and play our own role. We found a director in Gothenburg who we were really able to connect with on a natural level, and we could easily exchange thoughts and ideas with him while building a trusting relationship which allowed us to be ourselves. It’s not always easy to do that if you aren’t confident, so I think we had a lot of fun on this record. There’s a video in production right now, actually, for the track The Pop Life; we filmed it back in the summer, but there’s a lot going on right now.

In the past you’ve collaborated with the likes of Gorillaz and Big Boi. Going forward, do you have a “bucket list” of musicians, visual artists or whoever else you’d like to join forces with?
I mean, there are musicians who we really admire and look up to, for example Sly & the Family Stone, Jimi Hendrix, Prince, Kraftwerk and so much more few and far between. Also some names that aren’t too big. We all love different music. As for the collaborating side; we’re so used to the old-fashioned way where you make some friends, and to me that is the most beautiful collaboration that can ever occur. There’s always a slight fear that a different collaboration may not turn out how you’d want it to, or that the collaborator is actually just a bit of an asshole. I could name so many people, but most of them are dead! We’re currently touring with Ross From Friends, and they make lovely techno music. It would be nice to collaborate with them.

Looking forward into 2018, how can we expect to see Little Dragon moving on and progressing? What are the plans?
We have a few tours planned! We’re going to America in March, and again in June. We’ll also be out of a record deal, so instead of making an album we might try to make a few singles or an EP, and just make music like that instead of waiting five years to release an album. There’s definitely more music coming, and we’re very excited about making it. That’s something to look forward to.

Season High is out now via Because Music. The band haven’t dwelled too long on it, though, because last month saw the release of brand new track Peace of Mind, a collaboration with Faith Evans. Give it a listen below.