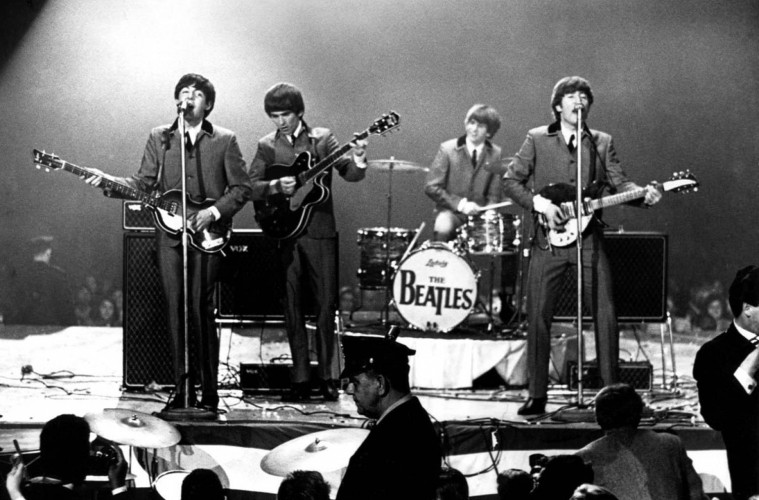 It’s been a long time coming, but last night it finally happened! Liverpool’s finest musical collective, The Beatles, marked their comeback during a hit-filled show at the Dynamo in Eindhoven together with a surprise appearance by special guests The Overslept. A comeback by Paul McCartney and co. had been on the cards for quite some years, with it only being a matter of time before we saw the Fab Four back on stage doing what they do best.

Before some 150 people laid witness to this absolutely momentous moment in musical history, though, it was up to Dutch quartet The Overslept to treat a crowd of past-their-best Beatles fans to some modern day punk rock. The band, who have made quite a name for themselves over the past few years, kicked off with a spellbinding rendition of popular single Stolen Car. Surprisingly enough, this was all it took for the small crowd to go wild as guitarist Délano Ladurner whipped his hair back and forth. Rumour has it that Ladurner wears a bandana to avoid comparisons with guitar legend Slash, although you could suggest that these comparisons start and end at hair. A sizeable moshpit erupted during fan favourite Little Miss Has Been, forcing the show to a halt as the four-piece left the stage prematurely. The Overslept during an earlier show. (c) Jack Parker

Some thirty minutes later, at 9pm, the lights dimmed and a packed out Dynamo basement briefly transformed itself into a Central London square circa 1964: screaming females, ecstatic men and four Scousers at the centre of it all who know exactly what all the fuss was about. Paul McCartney, Ringo Starr and holograms of George Harrison and John Lennon took to the stage and kicked straight into the groovy Day Tripper. Its cheeky guitar line and catchy vocals intertwined to produce a suitably memorable show opening, one which saw the vocals nearly drowned out by Eindhoven’s loudest crowd in living memory. The small audience didn’t hold up for the duration of the band’s hour-long set, once again drowning out the musical legends during classics such as I Am the Walrus, Help!, She Loves You and the psychedelic Yellow Submarine. The latter of the aforementioned four songs sparked the first big campfire singalong of the night, instantly turning Dynamo’s intimate basement into a collective gathering of likeminded individuals who all seemed to experience their first LSD trip fifty years ago. “That brought me right back, man!” said the 72-year-old Hans from Baarn, perching his elbow on the bar as he remembered that time when LSD was all the rage and Paul McCartney was a global sex icon. Why he was such a gigantic sex symbol became evident during the funky Love Me Do, accompanied by some sweet harmonica melodies as McCartney’s gaze ensured at least one woman fainted. Not that anyone seemed to acknowledge this incident as dangerous, though; in fact, it seemed to be the catalyst for huge cheers as people finally realized that Beatlemania was well and truly back. Had it not been for Sanne (65) from Ypenburg’s lapse of consciousness, then the band’s Eindhoven show would be considered a flop and we’d never see the Fab Four again. A trio of the infectious Eleanor Rigby, nostalgic A Hard Day’s Night and manic Helter Skelter followed victoriously.

As the set neared a triumphant end thanks to an extended medley of songs from Sgt. Pepper’s Lonely Hearts Club Band (only the first four, mind you…), many anticipated the inclusion of the band’s biggest hit: Hey Jude. The seven-minute ballad made for the show’s peak, so much so that McCartney ushered his band into silence as he extended the song’s memorable ending for a solid twenty minutes. There wasn’t a dry eye in the house, although you could blame the weed smoke for that one. As the band left the stage, many wondered if it really was the end again. Thankfully for them, it wasn’t. The opening notes of slow-burning epic Come Together rang through the speaker as Ringo Starr hammered away at his kit with utmost subtlety, allowing Lennon and Harrison’s unique playing styles to intertwine serenely. A cheery Ob-La-Di, Ob-La-Da followed, before Starr declared that the band were far from finished. “Fuck your curfew, Eindhoven! We’re nowhere near done!” laughed the Scouse icon as he ushered in a powerful rendition of Back in the USSR. “The Moscow girls make me scream and shout” sang McCartney and his bandmates in unison, laughing the Russian reference away during an ill-timed nerve agent joke between songs. As the crowd caught their breath once more, the oft-shy Harrison took the mic to announce that they’d be performing two more songs before they pretend that the show is over. The first of these – Drive My Car – saw the biggest moshpit of the night, one which turned into a flailing mass of dancing limbs once the Fab Four seamlessly transitioned into a hip-swaying Twist & Shout. An extended outro saw the group leave the stage to rapturous applause, finding themselves standing stageside in full view of the crowd as they realized that Dynamo’s basement was the wrong venue to stage an encore break in. As he perched himself behind his drumkit once more, Starr looked ahead of himself and smiled knowing that they’d staged the comeback of the century. A sprawling I Want You (She’s So Heavy) kicked off the encore in epic fashion, with the band including a stripped-back verse from Yesterday as its close. Lennon wiped away a tear and smiled, knowing fully well that his troubles were so far away. The Beatles, pictured on an afternoon walk through Eindhoven’s miserable centre.

It was here that the show got emotional, with Lennon placing himself behind a piano as he belted out a mash-up of Let It Be and his own solo hit, Imagine (which he dedicated to the Dutch Radio 2 as a sign of appreciation for decades of support). He had the crowd right in the palm of his hands, knowing full well that what followed would be the highlight of one’s life. A victorious All You Need is Love, featuring Pinkpop Festival’s Jan Smeets watching from the side, stopwatch in hand. Confetti decorated the room as the Fab Four announced that their Eindhoven show was just the beginning. “We’ve missed you, Eindhoven. We’ll see you soon!” declared McCartney as he and his bandmates left the stage to the biggest applause known to man. The Beatles are back, and they’re going to make sure that everyone knows it.

The Beatles’ entire comeback setlist was:
Day Tripper
I Am the Walrus
Help!
She Loves You
Yellow Submarine
Love Me Do
Eleanor Rigby
A Hard Day’s Night
Helter Skelter
Sgt. Pepper’s Lonely Hearts Club Band
With a Little Help From My Friends
Lucy in the Sky With Diamonds
Getting Better
Here Comes the Sun
Hey Jude
Come Together
Ob-La-Di, Ob-La-Da
Back in the USSR
Drive My Car
Twist & Shout