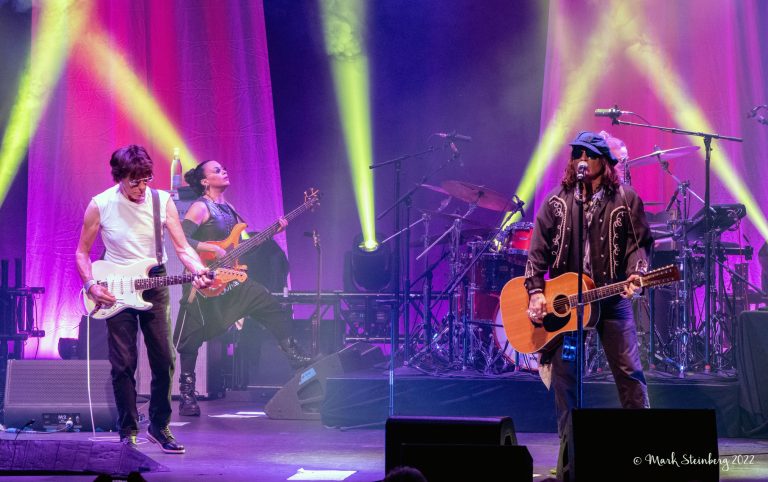 Jeff Beck and his band are currently on a month long tour of the United States. The tour opened up in Texas, with Beck appearing on the same bill as ZZ Top for a few dates. Beck then performed his entire show without Johnny Depp for a few dates, and was joined by Depp on the September 4th Washington D.C. date. It is this configuration that will be continuing on up until the November 22nd date in Reno Nevada.

Mark Steinberg caught the second of two shows that the pair performed at the Capitol Theatre in Port Chester, NY on October 8th.

Beck opened the show solo (with his backing band) performing the classic “Freeway Jam” from the 1975 LP “Blow By Blow”. The set then took a sharp u-turn into a strange arrangement of the Robert Johnson classic “Me and the Devil” which featured Jeff on voice box vocals. Yes, that same voice box that catapulted Peter Frampton into superstardom back in the mid 70’s. Ever since his vocal debut with the 1967 release of “Hi Ho Silver Lining”, and the occasional performance of the Don Nix penned “Going Down”,  Beck has rarely used his microphone to do anything other than say thank you to the fans, or to introduce the band.  Thus the addition of this song was bizarre to say the least.  What became immediately evident in this diversion was the adeptness of the current backing band. Jeff is touring with Longtime Bassist Rhonda Smith, Keyboardist Robert Adam Stevenson (who performs on, and produced Beck’s new release with Depp “18”), and Anika Nilles on Drums. Beck’s interaction with new drummer Nilles was particularly engaging on the Mahavishnu Orchestra song “You Know, You Know”, and continued throughout the 1:30 show.  For years Beck has brought relative newcomers into his bands, and  he seems to thoroughly enjoy having youth play beside him.

Rhonda Smith had a beautiful solo spot in the aforementioned “You Know, You Know, and Anika Nilles was spectacular throughout the evening.  Her drum playing has a sharp attack that Beck seemed to really enjoy playing off of, and her cymbal work was stellar. Robert Adam Stephenson was also solid, and handled the Jan Hammer parts in “Star Cycle” wonderfully.

The collaboration of Beck and Depp, which seemed a novelty back when I caught them in 2019, now has more validity. The two are now touring in support of their 2022 release “18”.  They recorded a single (the John Lennon cover of “Isolation”) back in 2019, but regrouped during the Covid lockdown to produce a full album’s worth of material. Much of this current shows material is culled from the new release, and while Beck was onstage performing “Solo” he did stellar versions of “Midnight Walker”, and “Caroline, No”. When Depp came onstage at the 45 minute mark he helped Beck deliver the Link Wray instrumental classic “Rumble”. They then launched into Depp vocal performances of more material from the new release. Starting with “Hedy Lamar”, They then did “Isolation, “Time”, The Velvet Underground cover of “Venus and Furs”, and closed the show with the resounding version of the Killing Joke cover “Death and Resurrection Show”.

Though Beck has received much backlash from his longtime fans for the recent collaboration with Johnny Depp,  I found their grouping has come into its own. First, they actually have a record they’re promoting, and secondly Beck seems to be quite comfortable in his role of a supporting musician.  Depp’s vocals were strong throughout, and though his vocal was heavily reliant on a chorus effect, he and background vocalist Stephenson, recreated the sound of the record quite pleasingly.

It should be interesting to see if this partnership will continue. I’d tend to think that after this tour that Beck might realize that it has run its course, but you never know.  One thing is for sure, the addition of Johnny Depp into Beck’s live show has certainly changed the demographic of his audience. There were far more women at this show than I recall seeing at any previous Jeff Beck concert, and the throngs of fans waiting by the backstage door were definitely there in hopes of catching a glimpse of the star of the silver screen, and not Beck.