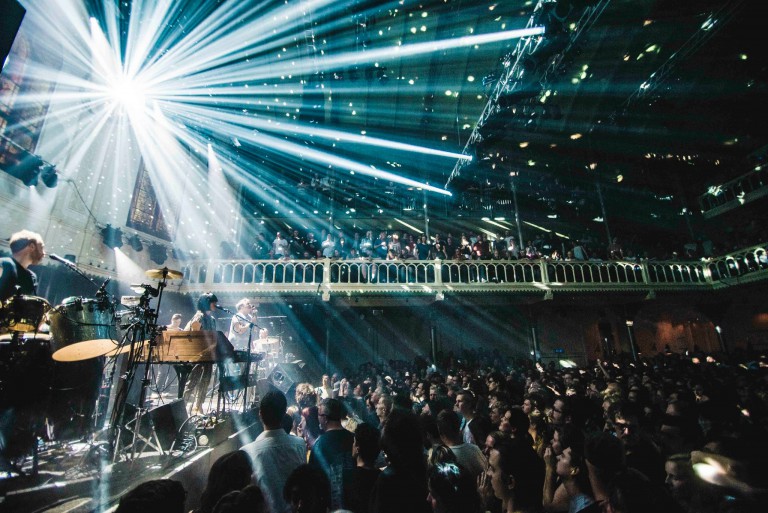 “The time has come, the time has come today” proclaims LCD Soundsystem mastermind James Murphy on the cowbell-heavy, meticulously crafted Us vs Them. The 2007 track, a grooving monster of a tune, could be described as one which somewhat summarizes the instant, in-your-face nature of Murphy and co.’s victorious reunion tour and subsequent album, American Dream. Although ten years old by now, the track carries with itself a rejuvenated sense of freshness and relevance. The same could be said for a majority of the New York outfit’s back catalogue, a good chunk of which passed by during a memorable second night at the Paradiso in Amsterdam.

James Murphy and his band have the tendency to cause cathartic chaos wherever they go, and in front of a packed out Paradiso crowd this seemed to be no different. From the word go, and following an extended DJ set by the impressive Shit Robot, not one limb remained static within the hallowed venue’s four walls. The aforementioned Us vs Them opened the show with an instant burst of energy, one felt strongly by a floor which made the venue quite literally shake. Its four-to-the-floor percussive rhythms, guitar stabs and Murphy’s nonchalant vocals all intertwined to set the tone for a night which may well go down as Gig of the Year. It’s not hard to see why people would suggest this, because the band really were on absolute top form from start to finish. Accompanying the seven-piece live band onstage was an extremely effective production which consisted of one single disco ball, glittering in all its glory during the sets manic moments and making itself known as a solid presence during the less disco-worthy cuts. The jangly Daft Punk Is Playing at My House featured early on, maintaining high energy levels which would persist for a solid two hours. The hit is just one example of LCD Soundsystem’s ability to mesh accessibility with obscurity alongside heaps of punk instances and dance rhythms, both of which received their own individual emphases during particular moments in the set. For fans of the band’s punkier outbursts, the aforementioned banger stood out early on alongside a sassy Movement, whereas the upbeat Tribulations and momentous Someone Great made for moments of mass euphoria and celebration.

The evening may have been in support of the stunning comeback album American Dream, however you probably wouldn’t have guessed this based on Murphy and co.’s setlist selections. Four new songs made appearances throughout the night, including early highlight Call the Police and a live debut for the bass-heavy I Used To, which appeared at the start of the encore. Both tracks made lasting impressions on a crowd filled with everyone from music connoisseurs and critics to casual fans, particularly during the former’s brooding, energetic build-ups. Call the Police may initially come across as an unassuming album track, but over the course of its seven minutes the total opposite becomes apparent: it’s a beast. From its opening percussive lilts all the way through to an explosive ending, and via Murphy’s euphoric vocals, the track was certainly the right choice as a comeback track when it emerged back in May. Its release was accompanied by American Dream’s title track, one of the other new cuts they pulled out of the bag tonight. It pulsates at a slower pace and gives Murphy time to shine by himself, eventually making way for a crowdsurf-heavy Tonite and tearful main set finale New York, I Love You But You’re Bringing Me Down. The former encompassed buzzsaw synths and continuously grooving rhythms, with the latter ultimately slowing everything down and allowing for an emotional breather. The whole essence of the track is just a love letter to New York, and for two short hours it felt like the whole Paradiso had been transformed into a sweaty underground bar in the heart of the City That Never Sleeps. Sure, they come from New York, but that’s not the only reasoning to support this claim; LCD Soundsystem are the epitome of music in the Big Apple, and they manage to bring its soul with them wherever they go.

Closing out the whole night on a suitably destructive All My Friends, nothing could be truer. James Murphy and his band had the crowd in the palm of their hands, and for one night only everyone was a friend of another. No matter where you looked, strangers embraced, cheered and danced their way through the evening as if it was their last night on earth. Had that actually been the case, then most would’ve likely accepted this fate. It’s no secret that LCD Soundsystem’s live shows are meticulously crafted spectacles, sticking to simplicity in its production and allowing the music to ultimately do the talking. The time came, the band saw, and they all conquered. There may be an air of uncertainty surrounding a potential future for the band going into 2018 (there are no live dates on the cards), but if this month’s European victory lap is anything to go by, then we could be seeing Murphy and co. stick around for quite some time.

American Dream is out now via DFA/Columbia. Stream the #1 Billboard charting record below.