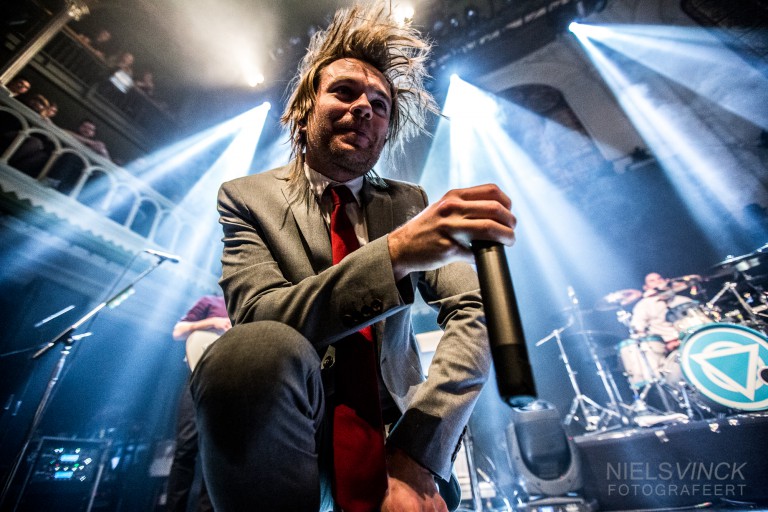 Back in September, when St Albans’ Enter Shikari put out uplifting new record The Spark, many fans wondered if the band could translate it to the live stage in a way which packs as much punch as their brutal, in-your-face older work. Its hyper-personalised lyrics were a far cry from their previously highly politicised output, something which more often than not served as one of Rou Reynolds and co.’s unique selling points. Last night, the band proved any doubters wrong when they showed Amsterdam exactly how well-suited The Spark is to the live stage. With an arena-worthy live production in tow, the band pulled a memorable set out of the bag which may well be the best they’ve ever done on Dutch soil. Astroid Boys and Lower Than Atlantis joined them. Astroid Boys took to the stage just before 7pm, utilizing an immaculately crafted mixture of grime and nu-metal to achieve their aim of getting everyone in the room moving. “I dance for weed, I sing for weed” declared frontman Traxx earlier on as the Cardiff outfit woke a sleepy Amsterdam up. Their grime-heavy masterclass, which peaked on the mental Foreigners (a track which rhymes Donald Trump with Donald Duck), was one fit for the ages. It demonstrated their ability and potential to take the helm in a genre which (of late) has become top-heavy and largely oversaturated. Technical issues may have affected them at one point in the set, but it didn’t faze them; in fact, it spurred them on to do an even better job at filling the energy levels of 1,500 revellers. Essex lads Lower Than Atlantis fared just as well in front of what was now a full venue, presenting Amsterdam with something totally different to Astroid Boys’ grime-laden musings. The Mike Duce-fronted quartet mix and match different pop-rock and heavier elements to form a catchy whole, one which certainly got large swathes of the crowd moving. Sound problems did prove to be a weak point in the set, with vocals largely inaudible during earlier songs. Ending on a one-two of English Kids in America and Here We Go, the band proved that their next foray onto Dutch soil may well be in a venue similair in size to the Paradiso. They’ve got the potential, now they just need to fulfil it. Some 25 minutes later, the lights dimmed once more as The Spark‘s ethereal synth chords (courtesy of Sparky, the synthesizer which adorns the album cover and which Reynolds built for this tour) blasted through the speakers. The short-but-sweet instrumental album opener bears hope and carries with itself a sense of unspoken euphoria, something which Reynolds and co. ultimately capitalized on when they kicked off the set-proper on new single The Sights. Its stadium-ready chants and guitars proved to be the perfect kick off to an unsurprisingly memorable. Common Dreads‘ Solidarity followed imminently, opening the pit for the first time. “And still we will be here, standing like statues” declared Reynolds in a defiant tone, standing on the edge of the stage as he stared out into the abyss that is the Paradiso. Its sweating mass of people looked like a blur from above, one which constantly moved in all directions to the beat of Reynolds’ drum. Anything Can Happen in the Next Half Hour also featured early on, incorporating some old-school Take to the Skies vibes as a means of contrasting with the softer, newer tracks. Not that you could call all of The Spark softer, though. The fast-paced and frantic Take My Country Back set pulses racing from the word go, allowing Reynolds the chance to express his fury at the state of Great Britain alongside some tight percussive work from drummer Rob Rolfe. Together with bassist Chris Batten and guitarist Rory Clewlow, Rolfe forms out a vital part of the band’s rhythm section. There aren’t many drummers out there with panache and technical skill that Rolfe has, which only goes to show how much of a rare breed he is. Fan favourite The Last Garrison followed, producing an added sense of fury as the set powered on by means of some heavier cuts. The in-your-face Radiate left no stone unturned as it alternated between upbeat riffs and a slower mid-section. “So to keep us from falling apart, we’ll write songs in the dark” sang Reynolds with just a sole, lilting guitar line to accompany him as the track raced towards a photo finish. A brutal one-two of Arguing With Thermometers and Rabble Rouser followed early highlight Undercover Agents, with all three tracks succeeding in causing total carnage on Paradiso’s holy ground. It made for a moment in the set where the quartet toned things down a few notches, with Reynolds perched behind a piano for the emotionally hard-hitting Airfield and euphoric Adieu. The former, which saw the crowd sit down mid-song, tackles Reynolds’ search for optimism while battling mental health issues, whereas the latter is one of Enter Shikari’s very few love songs. Once Adieu’s final notes well and truly died down, it became clear that the set could only go in one direction: towards the finish line, faster and harder than before. The bouncy Anaesthetist brought out the political madman in Reynolds, one who transformed into a manic circus ringleader as he introduced Amsterdam to their brand new Quickfire Round. In this part of the show, the band set out to play four songs in the space of eight minutes, each one more hectic and destructive than the one before. Breakthrough hit Sorry, You’re Not a Winner kicked off the Quickfire Round, before A Flash Flood of Colour’s …Meltdown tore the house down. It was then up to the pulsating and grisly Antwerpen to take over, keeping energy levels at an all time high before the batshit crazy Sssnakepit brought the Quickfire Round to a fitting end. Zzzonked closed out the main set, pertaining to its generally high level of energy to send Amsterdam into a sweat-filled frenzy. A brief encore consisting of Redshift and the catchy Live Outside brought the show to a memorable end, proving once and for all that Enter Shikari are the hottest band in the world right now. Last night’s show may have been downgraded from the 5,500-capacity AFAS Live, but that may well have been for the best, because the Paradiso and Enter Shikari were made for one another.

The Spark is out now.