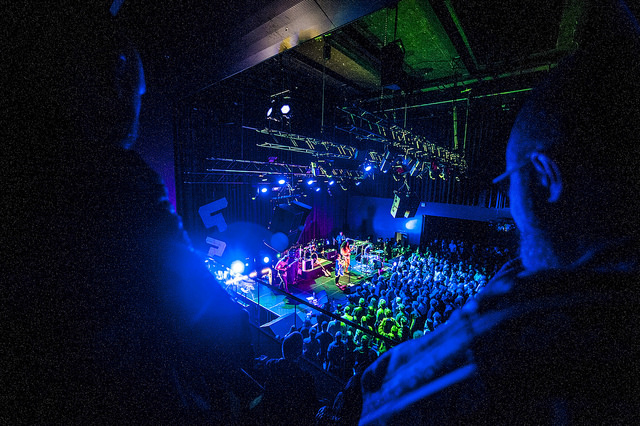 We sent music lothario Richard James Foster to the annual Le Guess Who? Festival in Utrecht to sample the musical delights that the four-day festival had to offer. See below his first contribution, which outlines the first day of the festival.

We get to Tivoli Vredenburg in the middle of a wintry downpour. It’s freezing outside. Despite the inclement weather, hanging about in the Vredenburg’s brightly lit bar isn’t my idea of good cheer. The feel that the place is a conference centre that has accidentally collided into a rock venue – and made the best of it – has never left me. There is something very sinister, very Ballardian about Tivoli Vredenburg, what with all its elevators, potted plants and discreet lighting, a feeling that makes me feel we are in some ‘70’s sci-fi movie. And I can never find the toilets.

A building that multitasks is all very well and good, but the dystopian feel is ramped up a few notches when we find ourselves standing in a long queue for a concert by a Christian rock band and not the Le Guess Who?. Once we get our bearings, we hook up with Annelotte from Amber Arcades (more of her band later) and go to watch William Tyler kick the festival off. Tyler’s recent LP, Modern Country, is another confirmation of the clear-sighted talent we heard in his last two LPs, Impossible Truth and Behold the Spirit. Onstage, Tyler doesn’t really need much to impress, it’s just him and a guitar and a number of pedals. Though the blue and ochre lighting that bathes Tyler also sets the tone, and makes you think that he’s just stepped out of his latest LP cover. Frivolous thoughts are swept aside, however, as Tyler smothers the audience in repeat waves of finely wrought guitar patterns and runs. The whole thing is very delicate, very mournful in spirit and very, very raga. It’s like he is playing a requiem at the world’s ending. It’s a great start to what turns out to be a very enjoyable evening.

For all my irritations with the Vredenburg, they are minor when you realise that you can easily properly take in five acts in the space of an hour. That is truly great. Tonight there’s plenty to enjoy, and running between rooms almost becomes an exercise in refreshing the sonic palette, as well as a way of working off the beer. To start with we go and dig 75 Dollar Bill’s set in Pandora. Their meandering space-drone blues and leftfield percussion create an atmosphere that floats somewhere east of Venus. Elsewhere, Bassekou Kouyate & Ngoni Ba’s brilliant song for a Malian king (I’m going to have to skip on the title, peeps) is a melismatic tour de force, packed with spirit and grace, and the highlight of a great, all-giving show. Back in Pandora, Steve Gunn is as efficient, and as brilliant as ever. There’s something of John Spencer guitarist, Judah Bauer, in the sheer ease with which Gunn plays through his workouts and keeps you on your toes (just at the point when you think you’ve seen enough). Suave cock-rock for the cognoscenti, that is for sure.

By contrast, over in Herz Arnold Dreyblatt gives a welcome reprieve to all the hippy-dippy spiritual uplift stuff floating round the Vredenburg with a brutal set of modernist electronic minimalism. Arnold’s set is great fun. Laying down the law by conjuring up a series of uncompromising bleeps and blurts, he clicks his fingers and shakes his hand – as in approval of his own racket. It’s cheeky stuff from this old cove. Possibly the gig of the night, though, is Lonnie Holley, up in the crows-nest venue, Cloud Nine. Sat behind a set of keys, swaying this way and that, he empties his memory bank. We get a life-story of considerable hardship and innumerable low-grade park-bench misunderstandings, all wrapped up in an ethereal, mystical, musical ambiance that is also sweet as ambrosia. Memories of Arthur Russell also come flooding back to your correspondent; maybe it’s in the delivery, or maybe it’s the mercurial nature of his music. He takes in his surrounding to compose what is an on-the-spot ode to Cloud Nine. It seems that only good spirits drive this sonic carriage. But the lad is on the point of breaking down throughout, such is the force of his muse. It’s unique, exhausting, and many can’t take the sheer weight of his muse. Feeling whacked, we pass up on Wilco but stick around to take in Deerhoof. Ah Deerhoof, just like The Fall, always different, and always the same. Satomi Matsuzaki still kicks the band onwards (acting for all the world like some post-rock gym instructor, exhorting us all to greater effort) Greg Saunier is still a wisecracking wiz behind the kit, and Ed Rodriguez still kicks out the jams like no other. It feels that nothing has really changed since their set here three years ago, but that is fine, as that set (in the old Tivoli of blessèd memory) was utterly brilliant. Watching them play always gives a great impression of the inherent fun of pop music. And the set is explosive, and as leftfield as ever, showing off a classic pop sensibility turned on its head and made to perform wild and wonderful sonic tricks. A tonic for the times.
We catch 10 minutes of Fennesz’s melancholy, but rather bitty set but can’t really catch onto what he’s trying to do. It feels as if the loops and tough guitar noise can’t reach a happy union. Or maybe I’m tired and too full of music to judge. We hear reports of Girl Band and Die Nerven sandblasting the audience over in de Helling, but we are by then heading for the train. There are three more days of this to go.
Check back tomorrow for the second instalment of Richard’s Le Guess Who? adventures. All pictures are courtesy of Le Guess Who?’s Flickr page.