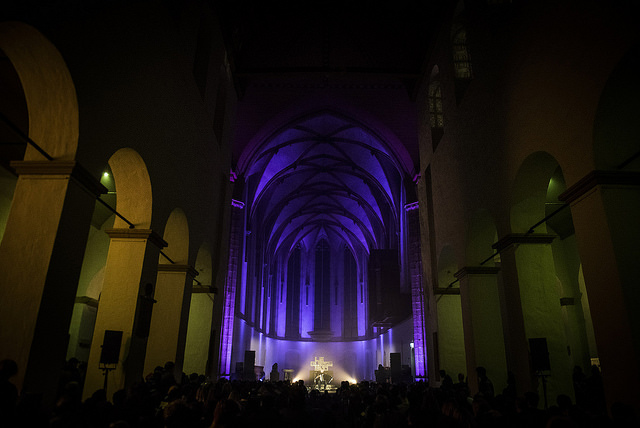 We sent music lothario Richard James Foster to the annual Le Guess Who? Festival in Utrecht to sample the musical delights that the four-day festival had to offer. See below his second contribution, which outlines the second day of the festival.

I am aware that watching a bloke play an accordion in a church is not really the sort of thing that sets trendy pulses racing, but this is Le Guess Who?. And, going on the festival’s past record of introducing oddball music to “mainstream indie attention” we trooped dutifully into the Janskerk to see Mario Batkovic. What to say? Well, after the gig I almost decided to go home there and then. Surely, no-one was going to top this remarkable display. Like Caesar at Alesia, nothing was left to chance. You got the feeling that Batkovic had summed the setting, the crowd and the ambience up perfectly. And decided to hand out a battering of the first order, a pummelling of the senses. But one that was incredibly enervating and uplifting. Make no mistake, this man is a total musical wreckhead. A classically trained punk both drawing on and trashing his Balkan roots with some heady Swiss anarchy (of the purest Young Gods-Walter Wegmueller variety), Batkovic played like a wild banshee. Imagine Yann Tiersen on acid [sic!], but with no Left Bank flummery. Hard madcordion rock [sic!], and a Joe Meek attitude to boot. It was so surprising. Accordions are normally used to set a schmaltzy or maudlin tone, not to be squeezed, beaten and grappled to within an inch of their very being. No Sir! The chinstroke brigade – who thought they’d pop in to “approve” of their own broadmindedness in that kind of removed, urban knobhound manner – were rooted to the spot by Batkovic’s virtuosity. Man, his name is almost Batcave, so he must be a Head… Dude took no chances and got a standing ovation at the end of it.

If you read the Thursday review you may have noticed that I praised the Tivoli Vredenburg setup for allowing  the visitor to see a whole heap of acts in a short space of time. No such gallivanting could happen on the Friday. In one of those peculiar twists of fate that can lead you to curse the Gods of Programming, we noticed all the things we wanted to see were scheduled for the same time, and showing in venues at different ends of the city. (We are mega pissed that we couldn’t catch the brilliant King Champion Sounds, for example.) Friday therefore became decision day. You nailed your cross to a select run of venues and hung on in there. To begin with, we chose to check Vredenburg to see Bo Ningen blast a new hole in rock’s ozone, and Beak> meander rather perfunctorily (and disappointingly) through their post-Kraut set. Then we ran over to see Maarja Nuut and Hendrik Kaljujärv play Theater de Kikker. This was a rare sighting indeed, her only Dutch show to date. Now I’ve raved on at length this year about her LP Une Meeles. On one level it’s an Estonian girl with a fiddle and a set of ghostly stories. Not something that you’d think is a must for every Head’s record collection. But there is something incredibly fleeting about her sound that is also incredibly moreish. Talk about ghostly reserve… Once sucked in you become aware of a restless and inquisitive intelligence using a template so transitory, so zephyr-like, that you could miss it if you turn away. Tonight Nuut was trying out something new; a layer of live, looped electronics (using 20 channels on the mixing desk) fed back into the tracks. The set, beginning with the Une Meeles tracks (stories of shapeshifting, sororicide and the animal world) got progressively darker and more complicated, with the two musicians beginning to find their groove and explore areas off the musical map. Estonian music often has a feel of being on another plane; and Nuut and Kaljujärv were beginning to broadcast from this nether world, adding beats and gloopy synth depth charges to the romantic sweeps and scrapes of the fiddle. By the end – tragically almost, as they ran out of time – things started to get ravey and a beat started to build up and up; the electronics exerting a gravitational pull to Nuut’s ethereal wanderings. Brilliant and total third eye material, but you needed to be there to the end and soak it in.

Elsewhere, outside of the limboland created by Maarja Nuut, Le Guess Who? was in full swing. Your correspondent effected two lung bursting route marches to see the transformation of Savages from piratical, devil-may-care post-punk sloganeers to a slick and powerful stadium band akin to imperial era Simple Minds/U2 (but of course heaps better and less pompous). The band are frighteningly good, and in Jehn Beth they boast possibly the greatest rabble rouser around. Her astute appropriations of Jacobean theatrics and snarling John Lydonisms do her immense credit, and her way of getting people onside without ever coming over like an incredible arse gives us all hope. Savages do the obvious brilliantly. You get what you want, and that is actually just fine. Man they should be massive, it has to happen.

But, despite all of this incredibly affirmative stuff, we couldn’t stick around. We danced the military two-step down to de Helling, where Klara Lewis was playing. At once pleased and pissed off that this gig was at de Helling (for my money boasting the best sound in the city but possibly the biggest ballache outside of dB’s to get to) we decided to camp out for the rest of the evening, and drink away the dreadful prospect of the Utrecht-Leiden night train. And we had Klara Lewis to soothe us. Klara Lewis is a remarkable talent. Her music (as heard on two brilliant LPs, Ett and Too and the electric, uber-romantic Msuic EP) is the sound of things to come, no doubt. Tonight, with no real time for a line check, Lewis snapped her fingers and ploughed into a jaw-dropping display of C21st romanticism. Conjuring up a marriage of a sound birthed in a sensory deprivation tank and utterly brilliant visuals, this show was mind-blowing. There is a very, very feminine star that guides her music. An electronic abstraction that is soft and seductive but, like the Goddess in her other aspect, one ready to turn vicious if initiates get too cocky. There is also this feeling of deep outer space, the romanticism of space, the sort of thing that seems to have been cast aside in these microchipped, squeezed-and-streamed, lockdown times. Lewis’s playful, powerful muse busied itself with opening up half forgotten mind-maps and buried sonic portals. And we happy few quietly worshipped and got stoned immaculate watching the backdrop. Afterwards we held court in the de Helling bar. Meaning we missed Drinks who were by all accounts, fabulous. Happiness in the haze of a drunken hour could not delay the inevitable, however. As predicted the train was hell. But hey, when you’ve been to Pluto and back courtesy – in the main -of some remarkable women artists, you should count your blessings.

Check back tomorrow for the third instalment of Richard’s Le Guess Who? adventures. All pictures are courtesy of Le Guess Who?’s Flickr page.