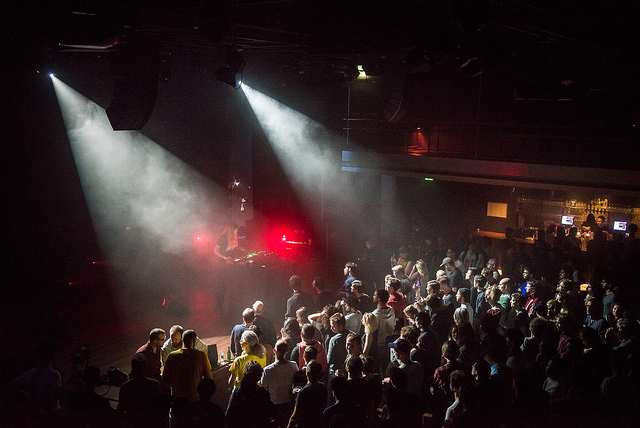 We sent music lothario Richard James Foster to the annual Le Guess Who? Festival in Utrecht to sample the musical delights that the four-day festival had to offer. See below his fourth contribution, which outlines the third day of the festival.

So; Circuit des Yeux is packed at Janskerk, and we miss out. We go back to ACU only to miss out on The Sweet Release of Death, which is also packed out. Hardly the best start to the evening. We saunter off to Ryley Walker in Pandora, who is enjoyably loose and raga and just the sort of trippy start an evening’s reviewing needs. Walker has all the time in the world to set his paeans to Haight Ashbury up and he revels in it. Suitably refreshed, we bound down to Julia Holter playing the Vredenburg main hall. After the groove scene at Ryley, and all the racket at Le Mini Who?, it’s initially a bit difficult to acclimatise to such a reserved scene. I also get the feeling the band (who are utterly brilliant) pick up on this over-worship of such a major player. Gah, can’t someone just take a trip or pass out drunk? Scarves are twiddled awkwardly. Julia fiddles with her notes on the lectern. The muted start – with Lucette Stranded on the Island – ain’t doing it, and Feel You isn’t the knockout bomb it should be. Then something snaps. As an intro to what turns out to be Silhouette, Holter mentions – almost as an excuse it seems – global warming and fascism. “Yeah Julia, man, that’s just the tonic”, I think (not thinking that at all). But something clicks into shape and there’s a new energy in the room. Silhouette is utterly ace. After that everyone relaxes and takes in one of the best artists about. An amazing show. Tonight is turning out to be a night of pleasant surprises. We hit the cavernous Ronda to see Dinosaur Jr. I’ve not seen them since 1990 or so. I do like their latest LPs, mind. So I’m curious but not overly bothered, if that makes any sense. 40 minutes later, after being rooted to the spot through cock ups and surly asides aplenty, I’m buzzing. It’s an amazing show, not dimmed by the fact that Watch The Corners goes tits up, probably due to one to many pedals overheating. (By the way the guitar tech-cum-electric banjo player who spent most of the gig on his knees twiddling the hell out of J’s pedal set-up, in increasingly frazzled attempts to make it work, looks like the lad who drives the school bus on The Simpsons.) Everything is great, totally great. Tiny, The Wagon and Love Is… are like runaway trucks full of pre-packed burgers, Freak Scene a celebration and a shared emotion. J Mascis plays his solos like every teenager’s “you’d  let me cop off with you if I could do this” wet dream anywhere, ever. Barlow mixes sardonic asides and marvellous bass runs. It’s a superb show. We run off with wingèd feet to get briefly battered by Elza Soares’ flaring, flaming, camp samba diva show. Soares, obviously beaming in from atop of Sugarloaf Mountain (she’s nicked Jesus’s throne from under his robes, too, on which she imperiously sits) sets a party up that threatens to cause subsidence at nearby Utrecht station. Tragically we can’t stick around  as we promised a friend to see Guy One and the Polyversal Souls in beautiful, much-loved RASA. It doesn’t start well. There’s a spiel from the drummer about how long it’s taken yer man to get here. Gah, these serious young tykes solemnly introducing African artists like Sting leading rainforest chieftains by the hand on Wogan. I’ve got into fights at Café Oto for less. BUT, then, everything is good. Real good. The band shut up and play; and they can play, like hell, setting up a steady and very appealing ‘beat backdrop to Guy One’s poppy kologo runs. Guy One’s got a sunny, uplifting vibe, not as rootsy or as “animal” as fellow Ghanaian Ayisoba, but he’s mining a similar vein. It gets fucking spiritual as it heats up; funny, too, with quirky percussive asides and shifting counter melodies. The audience goes ape. RASA is always a scene within a scene at Le Guess Who?, almost like some Magicke pixie corner of Glastonbury where elves meet up to drink mead and the like. We peg back to Vredenburg to catch more sounds from that great continent with The Ex and Fendika in Ronda. I’ve seen this show a bunch of times, the first time being the remarkable The Ex tour in 2014, but it never ever fails to charm. After a cracking, kicking and thoroughly modern set from The Ex, we get Fendika. A numbed audience (some of whom couldn’t quite wrap their heads round the fact that had to deal with an Ethiopian song and dance troupe amidships a gig) take things in, or drift off. More fool the drifter-grazers! We get the whole Fendika set of wedding songs and laments, and interactive crowd chants; with chief dancer Melaku leading the charge to the mesmerising backing of the Kirar and Kebero. Further, the ending is as marvellously looney as ever; the two acts joining to play their dual single, the sensual slow burning Lale Guma, (a total heartstopper), followed by Addis Hum, with Ex drummer Kat bashing out the vocals. Then we get the whole swords-and-clubs-and-punk act, with Arnold screaming his lungs out and Terrie and Andy making their guitars sounding like chainsaws, and Melaku wielding a machete. It’s incredible. Wow. And now for something completely different. Whisked up to the upper portal of Cloud Nine we catch the elfin Laurel Halo knock out an increasingly frazzled techno set, beats and counter beats and half beats flowing from the stage like bees buzzing around a lavender bush. We also take in Wooden Shijps’s most groovy drone workouts and then, finding ourselves unmann’d and buffeted by the ill winds of tipsiness (and the very confusing elevators), cadge a lift home from some kind musician friends. Life is sweet! Check back tomorrow for the final instalment of Richard’s Le Guess Who? adventures. All pictures are courtesy of Le Guess Who?’s Flickr page.