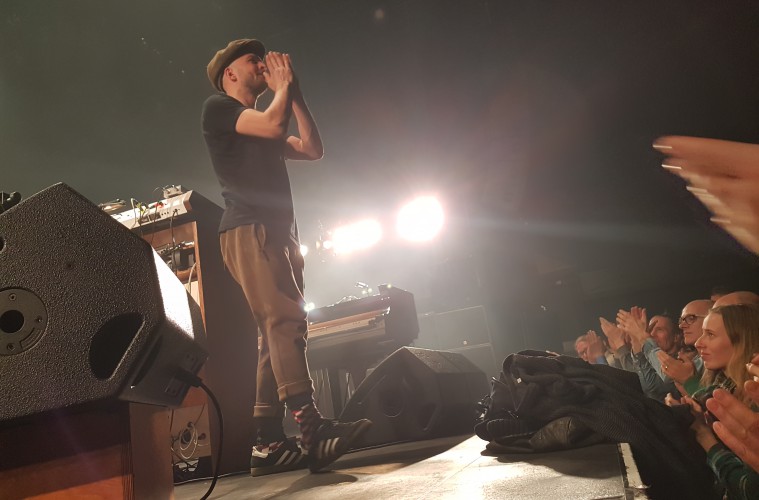 Nils Frahm is a restless man. To many, he’s the author of an extensive back catalogue of creative, mostly ambient works which range from gorgeous subliminal music to the fringes of IDM. His back catalogue, including collaborations, spans an incredible amount at just 35 years of age. No-one could accuse him of being lazy. Yet despite his reputation as a composer of predominantly ambient music, he retains a popularity that many in this genre can only dream of holding. Though there’s no single thing that makes this the case, it’s hard to argue that one of the things that sets him apart from others in this field is the incredible experience of seeing the man perform live.

By the time you hear a Nils Frahm song live, the resemblances with the studio version will decrease the longer ago it was recorded. For Nils, the stage isn’t a place to play the hits, it’s an extension of his studio, it’s a space where you get the voyeuristic insight into the creative playground of an incredibly talented musician. His instruments are conduits of his creativity. As tours have gone on, Nils has increased the number of instruments he’s taken with him as part of his live setup, confessing mid-set that he now has “more than ever before”, taking time between songs to thank those who’ve made this possible. When a grand piano only takes a small fraction of the stage for an arsenal of instruments for use by only one man, you know he’s either a poseur or a mastermind. With no support acts, and with no visual fanfare other than a light spray of dry ice and tasteful lighting, Nils strode on stage dressed as though he was about to play a round of golf in the 1920s. A flat cap kept his head warm while his plus-fours were short enough to show off his flashy socks. Though a classically trained pianist, he also avoids the pompous self-seriousness of the classical world, with a welcoming and inclusive attitude to the music he makes.

As the applause died down, Nils sat at the left of his musical workstations with his back to the crowd to open the proceedings with the opening notes of The Whole Universe Wants To Be Touched. With the absence of the vocal harmonies which compliment the recording, a low drone note sounded massive through Doornroosje’s amazing sound system. The sound was so quiet, so respectful was the audience to the importance of the subtleties in music like this, that the camera clicking of a photographer was loud enough to disturbed the meditative drone. There was no photo pit or press for this sold out show and said photographer had barged his way to the front just before Nils started. It took three attempts by Nils to turn around while playing and plead with the photographer to shush before the photographer realised that it was him that the gestures were aimed at. Thankfully he then got the message and scuttled off elsewhere. It didn’t take long for this to be forgotten, as we got to witness the magic of creation that Nils applies to his music. Slowly and confidently he moves from instrument to instrument, using so many tools to keep the music going, it’s hard to keep up with where every sound is coming from as the sustain and loop pedals are put to good use. Though the introductory bass line informed us which song we were about to hear, the distance between the live interpretation and the recorded version had already begun to grow, despite the latest album having only been released one week prior.

You’d think that all of this incredible timing, syncopation and musicianship would require the sort of mental focus of an individual that their face is nothing but a grimace of concentration, but Nils can’t help express himself physically as he performs. Whether it’s an intense facial expression with each flourish of a piano lick in My Friend The Forest, on a piano mic’d up to capture the ambient physical noise of the keypresses in the same way as the recording, or the manic bouncing of wannabe-DJ Nils in the new album’s title track All Melody, Nils is as physically into the music as he is mentally. As though this abundance of talent wasn’t enough, between tracks Nils is a charming individual too. After finishing the first song of the evening and bowing to the crowd to thank them for their applause, he took some time to thank the crowd for their support, reminisce in his sincere love for Nijmegen and in particular Doornroosje and explain that the reason he was talking so much was because he had so many settings to change on his instruments between songs and the alternative was awkward silence. His humble, dry yet gentle manner was enough to melt the hearts of the entire room. The consummate performer.

Every song was a variation on tracks from his new album All Melody, but after having already performed for over an hour, he took a moment to let people know not to worry and that the remaining songs will be from earlier releases. He explained that he will play one more song, go backstage for the “music industry standard amount of time” where he will listen carefully to the amount of applause, and if there is enough he will return to play two more old songs, all said with a wry smile. The juxtaposition of digital and analogue elements has long been one of the key features of Nils’s music, and it’s more exaggerated when you see the instruments themselves laid next to each other on stage. He swaps between synthesisers and organic pianos in a way that makes the pairing sound as if it’s always been that way. By the time a stage hand has crawled across stage to hand Nils two toilet brushes to use as percussion sticks against his grand piano, you’re blasé to the elements of surprise. He attacks the grand piano with a staccato rhythm with such intensity of playing that the results end up sounding like fully fledged dance tracks despite having no other rhythmic accompaniment. It’s an intense effect that’s impressive on multiple levels.

Then, after what felt like no time at all, but was actually two hours, Nils left the stage for the last time, as promised, to go to the merch stand and sign “so many of my things that my signature will eventually become worthless”. With someone so talented, interesting and expressive, it’s no wonder that Nils Frahm’s reputation as a live performer is so strong. I doubt there’s a single person in that room who won’t be back the next time Nils is in town.

All the images in the body of this article are courtesy of Lotte Schrander and Paradiso Amsterdam, where Nils performed the following night.