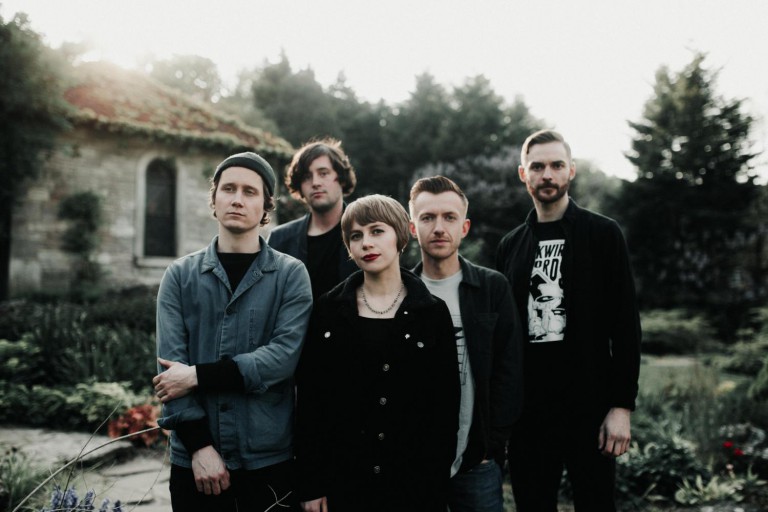 What better way to spend the first day of Easter at Patronaat’s intimate Café than to experience Cryptodira, Palm Reader and Rolo Tomassi lay down some brutal mathcore and post-hardcore tracks to a crowd of sweaty fans? The evening opened with Cryptodira, a Long Island, NY four-piece post/progressive metal outfit, laying down a half hour set that started the night off on the right pace with their 2017 release The Devil’s Despair. Vocalist Scott laid down some incredibly interesting harsh & clean vocals throughout their set while meticulously picking his guitar. Jeremy Lewis, Cryptodira’s bass player, laid down some incredibly groovy finger-picked basslines during In Hell As On Earth, the most popular track from their debut album.

After a short intermission, the UK’s Palm Reader climbed on stage for a 35 minute set filled with heavy material. The melodic hardcore & post-hardcore quintet kicked off their set with Sing Out, Survivor, which set the tone for the rest of the show. After chanting: “Push! Pull!” on new single Always Darker, from the upcoming Braille album, Scott took a little moment to notice the people washing their hands at the washroom area positioned above the stage, with a window looking down. He jokingly offered a free shirt for the fan brave enough to pull out his private parts, to no avail. Swarm, another one of their new album singles, stood out the most during their set as its sheer aggressiveness and technicality is second to none. A hefty moshpit formed herein, and the crowd went wild; wanting more.

Headliners Rolo Tomassi opened their sixty minute set with the beautiful introductory track from their latest project Time Will Die And Love Will Bury It. A long ambient intro set in a cloud of smoke slowly engulfed the silent crowd as they eagerly awaited the band. The intro segued straight into the track Aftermath, a track meant to ease the listener in and charm them for what’s about to come. Rituals, with its crazy lead guitars and intense drum patterns gave the crowd exactly what they wanted, danceable and aggressive with a slight sensual touch. This is exactly what makes Rolo Tomassi so magical, the contact between the rough edges and their soft touches gives the music a vibrant feeling. Ex Luna Scientia followed, allowing the band to explore some of their older material. A short intermission followed the epic A Flood Of Light, allowing fans to express their desires to hear vocalist Eva’s voice more – a perfect transition for the band to continue playing intricate music to an eager crowd. At the end of Stage Knives, another classic song from their 2015 project Grievances, the breakdown gave way to a full-crowd moshpit in the small Patronaat Café. After a heavy and repeated crowd chant of “We want more!”, the band allowed for a brief encore to end the night. It was up to the song Illuminare, from their Astraea (2012). All in all a night of love, passion and dedication for the somewhat more technical and introverted metal styles, courtesy of Cryptodira, Palm Reader and Rolo Tomassi. Sebastien Gamez.