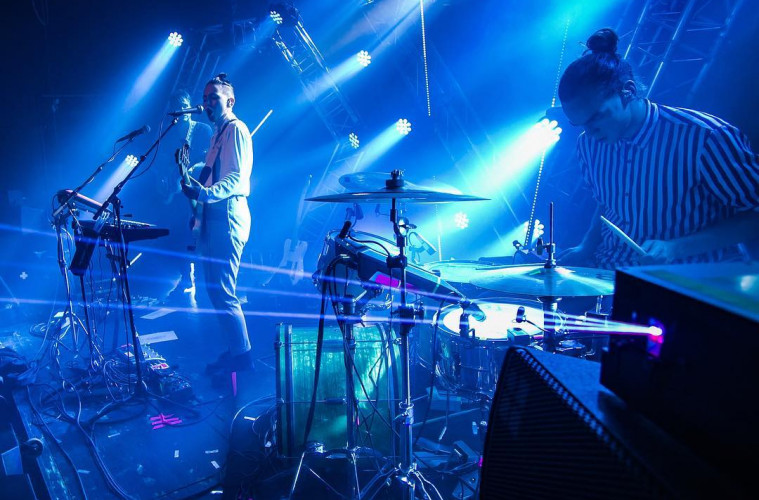 On a brisk Wednesday evening, attendees at Amsterdam’s Melkweg OZ were treated to a curious mix of music courtesy of Dutch solo artist CIEL and Icelandic electro-pop trio Vök. Up first was Michelle Hindriks performing under her moniker CIEL. Hindriks’ music is dreamy post-punk with ethereal vocals that sounds like an intriguing blend between Stereolab and Ladytron. Her set was in front of a criminally sparse crowd, but the band was excellent anyhow; showcasing material that combined rhythmic, angular bass lines with lush, woozy guitars. Final track Pictures in particular was a cracker, with Hindriks glacial vocal creating a beguiling synthesis with the song’s propulsive bass.

Headliners Vök are defined by a sense of ‘fun’. This is evident in the endless stop-start dynamics of their music and the way lead singer Margrét Rán prowls the stage, galvanising the crowd as if a single second of sedentary calm would lead to the death of everyone involved. Taking to the stage with hyperactive lights, the band start on Breaking Bones’ reverb drenched, driving guitars. It’s an interesting, almost restrained way to begin a show that from here on in goes at one breakneck pace. BTO follows, and while there is a certain euphoria to the effervescent synths and Rán’s charged vocal, it feels ultimately artificial, like a band straining to occupy an emotional state rather the music simply existing there.

In the Dark, the title track of their recently released second album, is a genuine slice of pop perfection. Dynamic bass combines wonderfully with the chorus hook “Treading water in the dark, to keep my head above my heart.” The song sounds sincere rather than earnest and induces the first real crowd engagement of the night. Unfortunately, In the Dark is an anomaly and the rest of the set conforms to series of derivative tropes. Nearly all of Vök’s music is centred on the loud/quiet structure and each song’s bridge slows to a breakdown from which a chorus explodes into life. Night and Day being a prime example, the song has a plaintive but bopping start which is overawed by the brash bombast of the chorus.

Watching Vök, you’re struck by a curious sense of band caught between worlds. Their songs do not contain the hooks to make them a pop powerhouse nor the idiosyncrasy to render them artistically interesting. The simplistic structures of their songs, combined with the frenzied lighting and energetic live show are all geared towards engendering the maximum amount of fun in the audience. This is not a bad thing in and of itself, but it ultimately leaves you feeling rather hollow, like the difference between a sweet induced sugar high and a delicately made tart. James Turrell