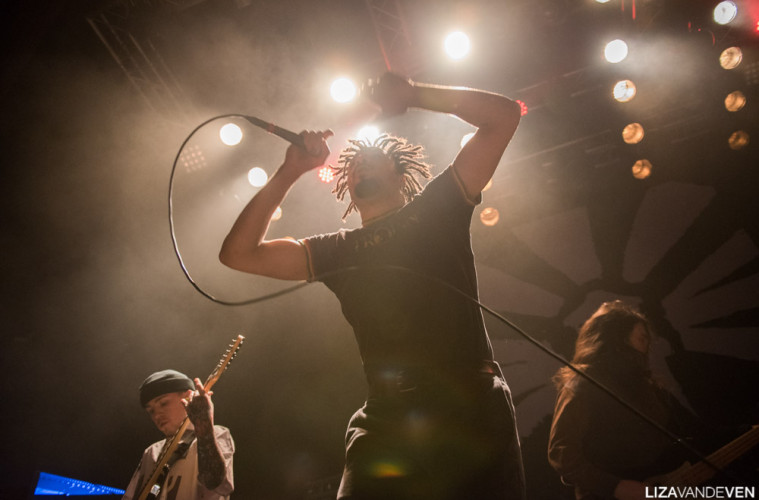 Earlier this year, Liverpool’s ferocious LOATHE released acclaimed new album I Let It In And Took Everything. The monolithic mesh of fierce nu-metal and post-hardcore attracted a glowing response from Pitchfork, with Kadeem France and co. only just being able to tour the record on the right side of the COVID-19 pandemic. Jack Parker called up France for a lockdown Q&A.

Hey Kadeem. How are you holding up?
I’m doing good man, just chilling in lockdown. It’s been a bit mad but I’ve been spending it with family and that’s been good.

It’s been a few years since Loathe emerged. You kept things anonymous for quite a while, what got you to break out of that?
Initially we just wanted the band to have one face that it was recognized for, and that was the mask. We didn’t want people to think of Loathe as five guys; we wanted it to be an entity, you know? Over time we just grew out of that, though.

I Let It In And Took Everything is your new album. Tell me a little bit more about the processes which helped shape this record.
The process took a really long time and it definitely got the better of us at times – in a good way. We spent two weeks at our bassists house; he lives in Wales and we started the record out there. We didn’t get the album done so we spent another month in a cottage in the middle of Wales where the nearest shop was a 40 minute walk away. We locked ourselves up there, and the pressure drove us all the best kinds of crazy.

The record received a lot of attention from bigger media like Pitchfork and The Needle Drop, something generally unheard of for heavier bands. How did it feel crossing over into that wide mainstream spectrum?
It’s a very overwhelming feeling. From the start I’ve always wanted to be recognized by those types of outlets. I consider our genre to be underground, so to then have Pitchfork to take notice is such a crazy feeling. And for them to give us a good review is mindblowing, because of course Pitchfork can be really harsh.

Do you think that heavier music is still far too overshadowed in that sense?
It depends. I mean, yeah, but I want us to be the kind of band who break that barrier. There’s a lot of new age metal bands doing things differently, like Lotus Eater, God Complex, Sleep Token, Wargasm and Static Dress. All of these bands are the new face of heavy music I’d say, and I really feel like it’s these bands who are going to take it to the next level.

The album came out right before the pandemic struck. How have you coped with promoting it during such a difficult period?
Luckily enough we got to do our UK headline tour in February, which only lasted about a week. We still got to play some of the album, and a lot of people got to see those songs live. Now all of this has happened. It’s crazy to think that a lot of people’s last shows before the pandemic might have been ours. For the album we had so much lined up, we would have been sharing our music to a lot more people on the road, and although the album has done well on its own I’m gutted we haven’t had the chance to promote it properly. I feel so bad for bands who haven’t been able to tour at all. You know Code Orange?

Yeah.
They released a new album and had a whole new set up with their drummer on vocals, and then they never got to play to a crowd. The live stream set they did was a moment in history, I’ve never seen anything like it.

Live music is obviously on hold. How do you see it returning and what do you think it will take before the industry can get back to some form of normality?
I feel like it’s going to be very slow. There’ll only be small shows and small venues at first, but as time goes on it’ll get bigger again. I feel like the first show back is going to be so…I can’t even put it into words. It’ll be the best show ever! The atmosphere in the room will be mad, and everyone will be releasing that energy which music gives us. It’s gonna be like the 90s. If you went to a show in the 90s everyone was in the moment and vibing without being on their phones. With the pandemic going on, everyone’s just been waiting for a show.

Especially considering the situation in the UK, what can bands do right now to keep things going in any worst case scenario?
I don’t know if this is legal, but I’ve had the thought of renting out a small venue when we get the OK to do small shows again. We always did DIY stuff at the start, just booking a venue, renting a PA and doing the whole promo thing ourselves. At the end of our last UK tour we did a secret show in Liverpool the day after the final show in London in front of 80 people. If we can do that kind of stuff again soon then I’m sure that all sorts of bands like us will be able to sell out similar rooms. It would be amazing.

How can we use heavy music to empower and stimulate change?
I’ve known of and experienced things like the current Black Lives Matter movement my entire life. I’m black, and I’ve dealt with all of these things. Seeing people talk about it all the time has taken a toll on my mental health, but for me just going for a walk and listening to music brings to a different place. Music in general helps me forget the world we’re in; it’s a very freeing feeling. That’s literally it – listening to music. Sorry, that’s such a cop out of an answer. I Let It In And Took Everything is out now.