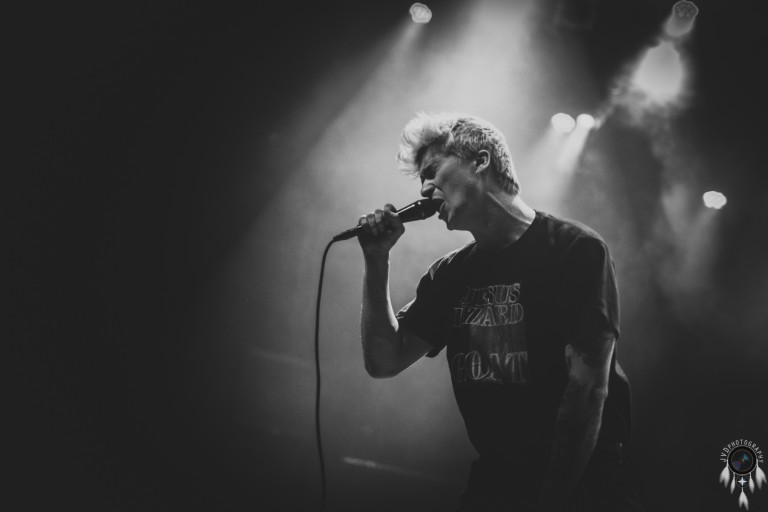 The Lockdown Lowdown with Holding Absence

Earlier this year, Holding Absence released double single Birdcage and Gravity. The tracks come at you from a completely different corner of the band’s sonic palette, exploring new territories which Lucas Woodland and co. have unfortunately been unable to tour due to obvious circumstances. Jack Parker called up Woodland for this week’s Lockdown Lowdown.

Hey Lucas. How are you holding up?
Not too bad. I don’t think many musicians have been that open about this, but it’s actually nice to be forced into having a routine. It’s nice to get on with things and get stuff done.

What kind of stuff have you been getting done?
Loads, whether it’s just writing music or practicing an instrument. I’ve gotten way better at guitar, and I’ve been writing a book too. You just get to do all these things you didn’t really have time for, because usually you’d just feel guilty if you did anything else other than music.

Back in April you released a double single, Birdcage and Gravity. Tell me more about how it came to be.
We were supposed to go to America last year, but our Visas were declined which meant that we had three months of nothing going on. We were upset that our plans got foiled, similar to the virus currently, so we decided to record some music and speed things up. We had songs ready to be recorded, so we decided to make something good out of a bad thing – and that’s what happened! We wrote a bunch of stuff for our second album, and then we chose these two songs as standalone tracks. It’s something we did early on in our career too, as the first two songs we released were also a double single.

You worked on the tracks with Romesh Dodangoda. What did he bring to the table?
Romesh is just a clean cut professional producer. He’s so by the book! Our first album had a lot of charm, but I do wish it was cleaner and more resolute. Romesh really brought out that side in us, something we hadn’t shown before. The guitars and vocals sound perfect, and although I understand that some people may not enjoy it I really wanted to show people that we could be this epic band. Romesh really brought that epic side out in us.

Is he the kind of producer you’d look to work with more down the line?
We do like trying different things, but I’m absolutely sure that we’ll work with him again someday.

So what do you look for in the perfect Holding Absence producer?
Oh, that’s a tough question. A lot of what we do is very emotional, passionate and cathartic. There’s a lot more to it than just the music, and so we like working with producers who understand where the music comes from as opposed to what it’s supposed to do. We want to evoke something with our music, but some producers don’t even ask that. They just go for the best sound and don’t pay attention to the depth of the songs. For us it’s about working with someone who is clean cut and professional as hell, but who’s also happy to go out of their way to achieve that human element.

So is this double single an indicator of anything we can expect in the future, a direction you want to head further down?
Yeah, definitely. Birdcage is a much poppier track, whereas Gravity is a lot more epic, but we really want to do different things. We’ve got such a vision, and we really hope that people don’t hear our songs and just expect that to be all. We’ve released nineteen songs in the last three years, and there’s a huge variation amongst it. Marigold is piano only, while a song like Godsend is more shoegaze-y. We like to put ourselves in one corner, but when you release a double single like we did the tracks do need to stand out a little.

This music came out in the midst of a pandemic. Has it been tough for you to keep everything going the last few months?
It’s hard, because every musician on earth is affected. Small bands are struggling to tour and make a name for themselves, whilst bigger bands are having problems paying their mortgage. We’re in between that and we’ve been hit in both places quite hard. The world has taken such a hit, so when it comes to life or death then sure, having a year off work is rubbish, but you just have to count your blessings. I personally know nobody who has had the virus, so in that sense I’m lucky. Some industries are better at coping with it than others, I have friends who can continue working from home and some who struggle.

Live music is obviously on hold. How do you see it returning and what do you think it will take before the industry can get back to some form of normality?
I mean, we want to see our fans and play shows, and I wish we could play tomorrow. But it’s also a question of morality; I don’t want to jeopardize our fans’ health by putting on a show too soon. Some bands might not be comfortable putting on shows right now whilst some might be forcing it out for the sake of gigging, but it’s worth mentioning that music venues are really badly hit at the moment. I work in a music bar part time, and every month I feel for them more and more. We need to respect venues, or we won’t have any left.

That’s also the thing right now. No one wants to be the first, but everyone wants to get back on stage.
Being a trailblazer is really cool, and I’m sure the first band to put on a show will be loving it, but I guess it’s not a choice but just life or death.

I was just speaking to Kadeem from Loathe and he mentioned the possibility of maybe putting on DIY gigs again once they get the go ahead.
I think the first shows we do when we get back would be fundraisers for venues, maybe we can even get Loathe in on them.

Of course there’s a lot more going on in the world right now alongside this pandemic. How can we use heavy music to empower and stimulate positive change?
I believe the first step in making change is saying something. If we don’t say something then nothing will change, so it’s very important to speak out about what we believe in. On the more nuanced level of our industry there are so many bands who have put out stuff like fundraising merchandise, which is a really special way of starting to say things. I studied music at uni, and a big module we had was about stereotypes and why people gravitate towards certain stereotypes. The metal industry is very much a white man’s world. When you go to Download Festival you’ll see it’s a very western and caucasian setting, but it is so important that we make a point out of there being no reason a person of colour can’t be a part of it too. It shouldn’t be a scary place for someone like Kadeem from Loathe, for example, who is often one of very few black people at most of the gigs he plays. I’d hate for it to be such a scary place for musicians like him. The same goes for women, I really hate how women still feel so intimidated by white men. It’s important for us to make sure that this community is accepting of everybody.