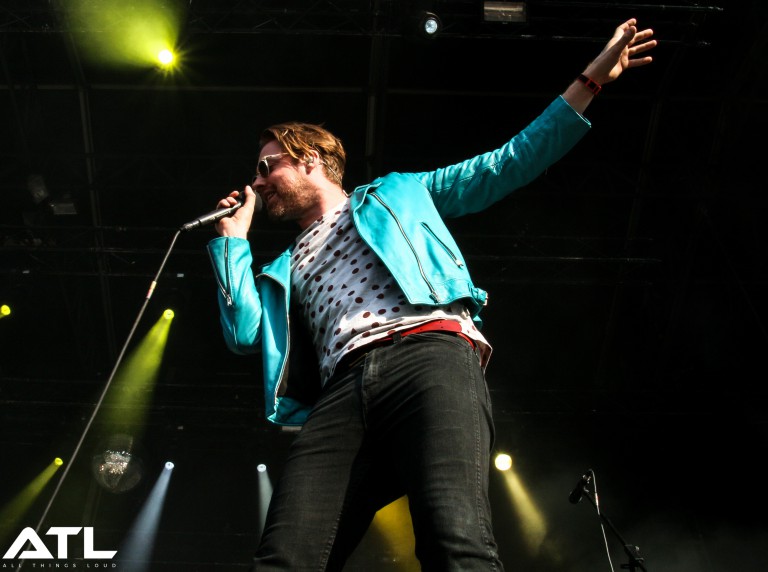 Nestled within the depths of Berlin’s inner-city, Treptower Park is a vast metropolis of green which, for two days in September, plays host to some 80,000 revellers. The second edition of Lollapalooza Berlin is the first to be held in the park, featuring headline performances by the likes of Kings of Leon and Radiohead, as well as sets from Nothing But Thieves, The 1975 and Major Lazer. The festival’s sweltering first day featured Kings of Leon atop the bill, alongside a diverse selection of acts both national and international.

Bosnian outfit Dubioza Kolektiv kicked off proceedings on Main Stage 1 (there are two adjacent to one another), utilizing their party-ready vibes and Balkan beats to the best of their abilities. Set opener Volio Bih and later tracks Kazu and Free MP3 stood out far and wide as the band descended into the crowd to incite bouts of chaos. As party starters go, Dubioza Kolektiv are up there with the best of them. American violinist Lindsey Stirling followed over on the second main stage, having flown over especially for the occasion in support of new studio album Brave Enough. Stirling is the kind of artist who you don’t encounter very often. Seldom do violinists perform with such serenity onstage while dancing at a tempo high enough to throw the average raver off of their feet. Throwing herself into the photo pit, Stirling danced her away in and around the photographers as she interacted with a group of baying fans in the front row. As she ran back up the steps and danced around, all the while still playing, it became evidently clear that Stirling is a natural talent worth nurturing.

Over on Main Stage 1, Welsh quartet Catfish & the Bottlemen satisfied the masses with a set which drew heavily from new studio release The Ride. Despite this, though, it seemed to be that the Berlin masses descended upon the band to hear their earliest classics. They may only have two records to their name, but the impact of these records are so big that the band already have enough potential up their sleeve to sell out stadiums. Early cut Kathleen made for a starting highlight, although it was one which Van McCann and co. had trouble surpassing. Australian psych-rock trio Jagwar Ma performed over on the Alternative Stage at the same time, entertaining an extremely sparse crowd to old and new cuts from across their beat-infused back catalogue. Set opener What Love built up the suspense as frontman Jono Ma’s vocals wailed across the field, before popular track Uncertainty bouncingly segued into recent single OB1, the first track to be shared from upcoming album Every Now & Then. The low turnout didn’t faze the band whatsoever; rather, it motivated them to put on a show which was nothing short of brilliant.

Leeds stalwarts Kaiser Chiefs followed Ma and co. on the same stage, previewing new record Stay Together in front of a packed field. Fan favourite Every Day I Love You Less and Less opened what turned out to be a greatest hits set peppered with the odd new track. Stay Together’s lead single, Parachute, made for an early highlight as Ricky Wilson and co.’s bounced energetically about the stage. Fellow new track Hole In My Soul was described by Wilson as a track that could “solve all the world’s problems”, making way for Coming Home’s balladry and ultimate classic tracks Ruby and I Predict a Riot. Whereas the former swaggered along with plenty of confidence, the latter presented Berlin with a chance to go absolutely wild. The crowd took their chance, and carried it on all the way through to manic set closer Oh My God, in part thanks to the fact that Wilson is a born and bred frontman who knows how to work a crowd oh so well. Although Kaiser Chief’s set on the Alternative Stage may seem like a relatively low booking, it eventually became clear that the stage’s intimacy worked greatly in Wilson and co.’s advantage. Seattle duo Odesza followed them on the same stage, pulling off a set which was nothing short of predictable and lacklustre.

Returning Nashville rockers Kings of Leon closed out Lollapalooza Berlin’s first day, performing one of just two European shows this year. New album WALLS is due in October, with Caleb Followill and co. pulling two of its tracks out of the bag. Lead single Waste a Moment and the sprawling set opener Over both demonstrate new sides to the band, however neither track takes away from the fact that Kings of Leon are one of the world’s dullest live bands. That is, dull until they play their big hits right at the end. By the looks of it, a big chunk of the Treptower Park crowd who chose not to check out New Order were only waiting to hear Sex on Fire and Use Somebody, both of which made out part of the final three songs in the set. Crowd interaction was, as per usual, on a minimum save for frontman Caleb Followill wishing his cousin (and guitarist) Matthew a happy birthday. They may be a rejuvenated band following years of professional differences and growing ego’s, but nothing will take away from the fact that Kings of Leon are just a dull band to watch perform. It’s one thing having the right songs (some of which they genuinely do), but it’s another thing interacting with the crowd or doing so much as smiling. By the time the band take on Europe’s festivals next summer, they ought to up the ante regarding the overall impression which their live show gives off.

Lollapalooza Berlin continues today with performances from Radiohead, Nothing But Thieves and Aurora.