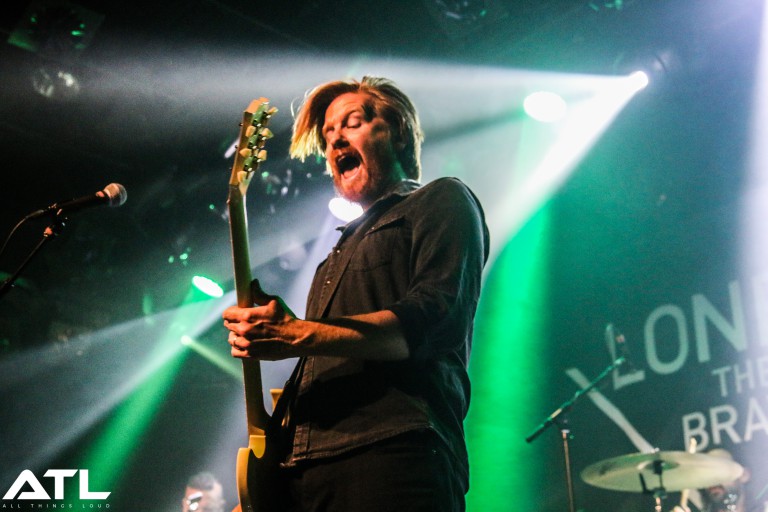 A couple of weeks ago, Cambridge-based rockers Lonely the Brave shared their long-awaited sophomore studio release Things Will Matter. The LP, which follows 2014’s The Day War, encompasses a whole range of genres and influences which have all somehow managed to define and secure Lonely the Brave’s position at the top of the new music elite. Last night, the band took their current promotional jaunt to Amsterdam’s Melkweg for a near-sold out show in front of some 700 fans. Support came from Zuid-Limburg’s Storksky. Storksky won the annual Nu of Nooit competition back in February, a win which gifted them with a slot at this year’s prestigious Pinkpop Festival. Their set comprised of a handful of tracks from their self-titled debut EP, one which main man Michiel Claessen recorded alongside a handful of guest drummers (including De Staat’s Tim van Delft). Onstage, he’s accompanied by a staple live drummer and female backing vocalist, the latter of whom also wears a stork mask throughout live shows. During their supporting set, the trio pulled off a handful of tracks which sounded like Queens of the Stone Age and Royal Blood had a love child together with Matt Bellamy. It may be a weird combination of influences on paper, however live it’s pulled off with effortless ease. Having popped up seemingly out of nowhere with little media support, Storksky definitely know what they’re doing and are sure to go places in the future. Headliners Lonely the Brave followed some thirty minutes later, having amassed a huge Dutch following in the last year. What started as an international touring band on a small scale has grown into a huge behemoth who have become an absolute force to be reckoned with. New album Things Will Matter is one of the best of the year so far, with David Jakes and co. showing the Melkweg exactly why. Set opener Radar kicked off the evening in rousing, upbeat fashion as it set the tone for the rest of the gig. Pummelling guitars, wailed vocals and pounding percussion courtesy of birthday boy Gavin Edgeley ensured that the enthusiastic crowd were kicked right into shape from the word go. As the set progressed, it became instantly clear that Lonely the Brave’s live show had increased tenfold since the last time they reached Dutch shores. Frontman David Jakes may still suffer from stage fright, but he’s now standing closer to the front and looking more self-assured, with lead guitarist Mark Trotter generally taking the lead when it comes to crowd interaction. Black Mire, Things Will Matter’s lead single, demonstrated a heavier side to the band’s standard anthemic indie rock, employing some destructive closing riffs to put across their hugely personal message. The track is darker than anything Lonely the Brave have ever done before, with the rest of the record following suit in this trend. The beautifully melancholic Diamond Days saw guitarists Mark Trotter and Ross Smithwick’s backing vocals intertwine effortlessly, before the pulsating Dust & Bones threw an extremely anthemic chorus into the mix. Things Will Matter definitely lends itself to the live stage for a multitude of reasons, most particularly its ability to set a crowd on fire without much effort. Later on in the show, encore opener Rattlesnakes sprawled in and out of consciousness ahead of show closer The Blue, The Green, which is taken from The Day’s War. Lonely the Brave’s ability to combine old and new tracks in one coherent live set is a commendable achievement, especially when you consider the potential longevity that all of their tracks have. Older cuts Trick of the Light and Backroads made for massive fan favourites, sounding not one bit out of place alongside new tracks Jaws of Hell and Strange Like I, both of whom managed to demonstrate the band’s ability to rock effortlessly within tight boundaries. The boundaries in question are those which make Lonely the Brave such an admirable live band: they’re able to rock out as hard and heavy as they can, yet there’s something which still holds them back and manages to keep the music at a somewhat restricted level. Aforementioned show closer The Blue, The Green provided fans with one last opportunity to belt their hearts out as the band pulled their #1 tearjearker out of the bag. Whilst Backroads proves to be an anthemic stronghold, The Blue, The Green demonstrates Lonely the Brave’s ability to bring a tear to the eye of even the toughest man in the room. “I wanna know what it’s like, so I can feel it inside” declared frontman Jakes throughout the track, his delivery sounding more and more fragile with every word. It’s very clear that Lonely the Brave mean every single word they sing onstage just as much as they mean every single heartfelt bass strum, guitar jab or cymbal smash. There is no one standout member in the band; rather, they’re a coherent group of talented musicians whose ability knows no bounds and will definitely see them go from strength to strength in the coming years. Will they sell out Wembley Arena within a year? Probably not, but they’re still the kind of the band who will one day rise to the top and show everyone that they were worth the wait. Things will matter, and so do Lonely the Brave. Things Will Matter is out now. You can stream it here.