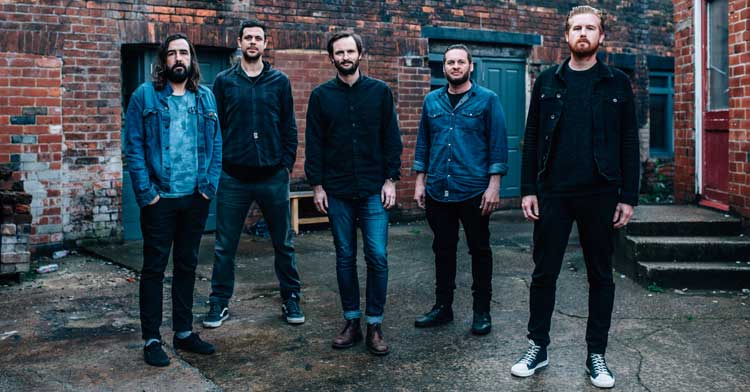 Lonely the Brave Talk Us Through Their New Record

Lonely the Brave have had a massive couple of years. The Cambridgeshire quintet released their world-beating debut album The Day’s War back in 2014, with its 2015 Redux edition marking a stopgap period in which the outfit worked relentlessly on their sophomore record. Later this month, the David Jakes-fronted group will release Things Will Matter. We called up guitarist Mark Trotter and asked him to talk us through each song on the record. WAIT IN THE CAR
This track kinda started off like a little piano ditty which I wrote at home. I sent it across to Dave and he subsequently sent back the lyrics. Originally, Wait in the Car consisted of piano and artificial strings, but that was before we messed around with it in the studio. We added synths and all sorts of other crazy strings.

BLACK MIRE
Black Mire has existed in some form or another for a quite a long time. It had this big, dense and dark riff; I wanted it to sound like an industrial machine. It’s a very potent song lyrically, and it’s got a pretty strong message which is intended for the people that it’s partly written about. Black Mire is probably the heaviest song we’ve ever written. The heavy ending riff came along in the studio, and we wanted it to sound crazy.

WHAT IF YOU FALL IN
This one kind of started as this little fingerpicking acoustic thing. It was fairly structured out, and in the studio everyone just played along. David’s lyrics are ridiculous and I love them; they’re something special. It’s the track which we expected to change the most in the studio, but out producer told us not to do that.

RATTLESNAKES
Rattlesnakes is one of the older ones again. We’d played that song a couple of times over the last few years, and we always knew that there was something special about it, even though it wasn’t quite where we needed it to be. David’s role on that song is very stunning lyrically. There’s a recurring theme on the record which he’s a prime example of.

DIAMOND DAYS
Diamond Days started with an open guitar riff which was played through for a couple of minutes into a Dictaphone. I sent it to Dave and it came back with an amazing verse. We forgot about it and completely left the track behind, until someone who works with the band told us that we should finish it. It’s a real favourite of us all. You can really identify with the song lyrically, because it’s all about the good and bad times. It’s also a change of pace on the record too, which is fun.

PLAY DEAD
Play Dead is an interesting one which had existed for some time. Something wasn’t feeling right, so we left it behind and came back two months later with a clearer vision and made some changes. I like that the song is so controlled; the end crescendo section also fits very well lyrically with what Dave sings. It’s about a situation his friend found himself in. The track goes from a controlled state to complete chaos, which I love.

DUST & BONES
There’s a classical composer I really like, and there’s a track where two violins interplay. It’s beautiful how they bounce off one another, and I wanted to replicate that. The way they interplay and move between each other is a bit like a dance, and it inspired me to write what became Dust & Bones. The high and low guitar lines in the chorus are an example of this. We have a big middle section on the track which worked really well, and lyrically it’s very personal to Dave. It’s just a beautiful insight into what he was thinking.

RADAR
Radar existed in another form, and it’s a funny one. I didn’t feel like it had any use at first, almost like it was there for the sake of being there. I played the opening riff out of frustration and it seemed to fit with what was going on at the time, so it went on from there. The lyrics are about surviving with your old friends and the people that count on, and how nothing can stop that.

TANK WAVE
Tank Wave is one of the last songs which we wrote for the record. It comes from a riff which Ross made, and which we subsequently chopped around. I really wanted the guitars to sound like Blade Runner, with this kind of synth-y thing going on. There’s a scene in the film, which is set in LA, where there’s all this rain and neon light. I don’t think I achieved it, but that’s what I was going for. It’s very personal and honest from Dave’s point of view too, as it’s about family relationships and stuff.

STRANGE LIKE I
This is a funny one. Originally it was this really slow riff with an arpeggio, which was basically moving around over the top of us like a moving bassline. It was very atmospheric, but we didn’t get where we wanted to go with it. So we played it very fast out of frustration, and it went on from there! Lyrically and melodically it’s very catchy; it sounds like a pop song but there’s much more going on lyrically. Dave is hyper honest.

BOXES
Boxes is one of those strange songs that just ‘appeared’. Five minutes before finishing rehearsal one day I started playing it and everyone just joined in; within ten minutes we had a song. Sometimes they just appear and you have to let the track do what it wants. On this record, Dave is more honest than ever before. It’s fairly obvious on Boxes too, with metaphors of boarding planes and that plane crashing.

JAWS OF HELL
This is probably my favourite track on the record. That song kicked my ass for about two years. It existed in loads of different forms and I knew it was gonna be special. But it just wasn’t there yet, and it eventually took two years for it to get where wanted it to be. It’s classic Lonely the Brave in how it starts in one place and ends somewhere completely different. I love songs which go on a bit of a journey, just like Jaws of Hell.

Dave just destroys it on this song vocally and lyrically, it’s just mesmerising. It’s a hard one to play live, which makes it even more rewarding. It now kicks the crap out of me when I play it! I love the ending, as it’s just a wall of noise. It’s a bit like post-rock stuff and other things like that; that wall of dense, sonic guitar music. That, coupled with Dave, just wow. I love that song.

Things Will Matter comes out on May 20.