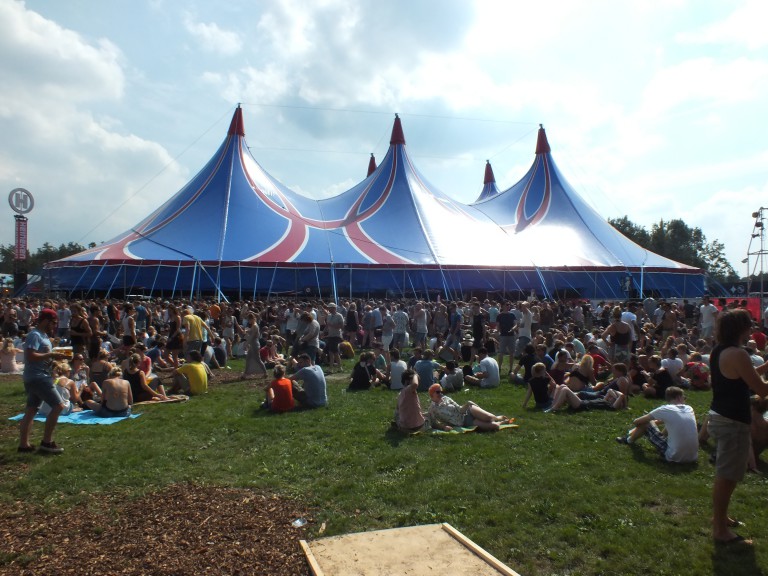 With the sun shining even brighter and summer approaching ever nearer, it’s time to prepare for the incoming festival season. With early season pinnacles like Rock am Ring and Pinkpop set to kick off the summer in rousing fashion, it’s up to Biddinghuizen’s Lowlands (in full: A Campingflight to Lowlands Paradise) to bring the festival season to an equally captivating end. We’ve taken a detailed look at the full line-up so far and, save for the headliners, lined up our first batch of recommendations for Lowlands 2016. One catch, though: we’ve only picked heavier bands who you ought to get moshing to. PARKWAY DRIVE
Australian metalcore giants Parkway Drive like to hit the ground not just running, but with brute force powerful enough to enable earthquake eruptions within a 200km radius. When Winston McCall and his compatriots in descend upon Biddinghuizen in August, it’s likely to be no different. New album Ire blends elements of metalcore, hardcore and glam metal (no joke) to unforgettable lengths, producing an end-result nothing short of bombastic brutality. They’ve got the songs, they’ve got the show and they’ve got a legacy to last a lifetime – don’t miss out on Parkway Drive.

SLEEPING WITH SIRENS
Okay, we get it. “Sleeping With Sirens aren’t heavy lol xD”. We’ve seen the comments, we’ve laughed at them and then reminded ourselves of times where Kellin Quinn and his band genuinely were a mosh-ready band. Hell, even the pop-lite Madness (2015) featured some notably in-your-face moments. It may not be so much the punch in the throat which Biffy Clyro’s new album (read on for that one) promises, but their older tracks still pack enough punch to keep Biddinghuizen going for a good solid hour. Love them or hate them (and their extremely dedicated fanbase), but Sleeping With Sirens are on top of their game and definitely know what they’re doing. SUM 41
Pop-punk reunions don’t get bigger than Sum 41’s. Following Deryck Whibley’s personal rejuvenation and subsequent return to prominence, he and the rest of his band have taken the world by storm during a selection of sell-out shows. February’s show at the Melkweg in Amsterdam was enough of an indication that the Canadians have picked up exactly where they left off, with this summer’s busy festival season likely to further prove this point. Expect classics like Fat Lip and In Too Deep to feature alongside a potential new song or two, because Sum 41 are ready for the future.

THEE OH SEES
Sure, Thee Oh Sees aren’t a metal band by any means, but bloody hell these garage rockers know how to destroy a crowd. The Cali outfit released the stellar Mutilator Defeated at Last in 2015, making it their 10th album since 2008’s The Master’s Bedroom is Worth Spending a Night In. There’s little news of a new album set for this year, however it’s more than likely that core member John Dwyer has got something exciting up his sleeve. Thee Oh Sees will probably perform in one of the smaller tents at Lowlands, so be ready for flailing limbs and ultimate chaos.

BIFFY CLYRO
A punch in the throat. That’s how Biffy Clyro frontman Simon Neil has described his band’s upcoming record Ellipses, which is due in July. Lead single Wolves of Winter demonstrated the Scottish trio’s newfound pack mentality, showing the world exactly what the renowned live band are capable of. Biffy are well on the way to being one of the biggest bands in the world, and it’s shows like their headline sets at Reading & Leeds (one week after Lowlands) which will further cement this. Mon the Biff! Check back soon for our second batch of (non-heavy, next time) recommendations! Lowlands takes place from 19-21 August at the Walibi World events terrain. Click here for more information. You can stream the official Lowlands playlist below.