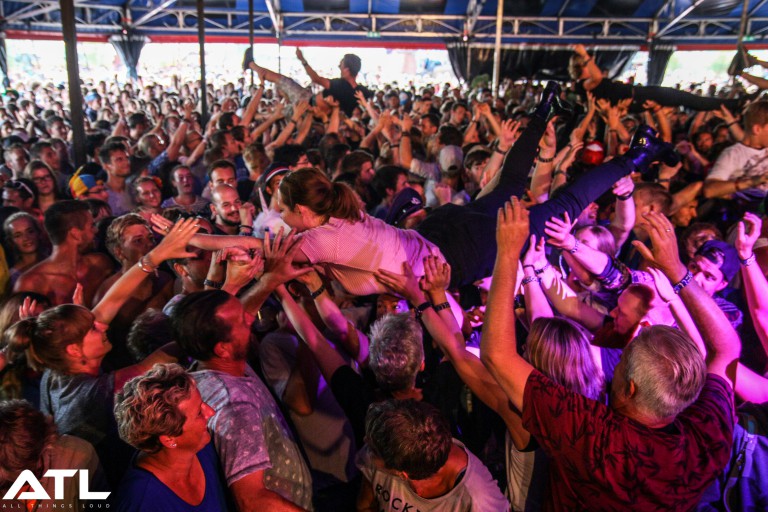 Today, Lowlands Festival announced details of its entire weekend timetable. Furthermore, the Biddinghuizen bash also revealed some big changes set to affect the festival site from a visual and aesthetic perspective. Today, we’re taking a look at the three biggest changes to the festival site, as well as the four worst clashes which visitors will be met by between 18-20 August.

Where’s the Charlie?
One thing which many festivalgoers noticed this morning was the absence of one of Lowlands most popular and loved stages: the Charlie. The small tent has played host to some of the best new bands in previous years, among them Neck Deep, Nothing But Thieves, King Gizzard & the Lizard Wizard (below) and The Growlers in the last two years alone. This year, though, it’s been replaced by the Lima stage (which now returns to its old location). What does this mean for new bands? Well, based on the new schedule it seems to be the case that they’ve been divided across the previously world music-centric Lima and the obscure X-Ray, which should make for some interesting performances. We’ll miss you, Charlie. Two new entrances
The organizers have this year blurred the separation between the campsites and festival site, making it easier to go from A to B and streamlining both areas into one main terrain. Gone are the famous chimneys atop the main entrance (more on that in a bit), having been replaced with two smaller entrances opposite campsites 1-2 and 3. The former is a brand new entrance, which is found just next to the popular Heineken stage. The latter entrance has always been there, but how they’ll look without the chimneys is anyone’s guess. ArmadiLLow
The ArmadiLLow has been billed by organizers as a non-stop, 24-hour party area which looks set to breathe some new life into the heart of the festival’s Cape Lowlands. It’s also the new home of Lowlands’ famous chimneys, which are supposed to form the centrepiece of this new area. You can find it opposite the general entrance by campsite 3, adjacent from the X-Ray, Bravo and India stages. The area looks to have some surprises in store, details of which you’ll just have to wait and see. There’s more than just this that’s different about Lowlands 2017, though. Also in and amongst the vast list of changes is a sock puppet theatre (We Will Sok You), a dam around Lake Lowlands which enables easier access to the Llowzone, and bigger constructions for the Alpha and Bravo stages. The former will now, at 20m high, stand partially open whereas the latter will see a transformation similair to that of a church, with the stage serving as the altar. Check out the full festival terrain below. Sean Paul vs PVRIS vs Mura Masa (Friday, 16:00-17:40)
Boy oh boy, what do you do in one of these instances? Do you get down with Sean Paul‘s reggaeton dance vibes in a (predictably) packed Alpha? Do you get emotional with the Lynn Gunn-fronted PVRIS (below) in the India, or do you lose yourself to Mura Masa‘s hypnotic electronica? Believe it or not, but there are definitely people out there who are going to be running back and forth between the Alpha, India and Bravo. And quite rightly so, because you should definitely grab the chance to see at least a little bit of each act. If we had to choose, though, then I think your best bet is Sean Paul‘s ‘foute’ nostalgia.

Tove Lo vs Sampha vs Black Foxxes (Saturday, 15:00-16:00)
Unlike other clashes on this list, this one is a full-on sonic collision with no overlapping performances. You’re going to have to think very carefully about this one, because whatever you go for will probably be your final choice however tempted you are to run back and forth. Why? Because all three acts are capable of drawing you, the listener in, from the word go. Tove Lo‘s onstage presence and sensuality is purely hypnotic, whereas Black Foxxes come at you with so much energy that you’re more than inclined to take part in the chaotic crowd. Sampha, on the other hand, has a voice so soaring that you’ll just want to stay and see what else he can do. Make the right decision with this clash, because you’ll regret it otherwise. Our choice? It’s got to be Black Foxxes.

Migos vs The Pretty Reckless vs HMLTD vs Flume (Sunday, 18:45-20:45)
On first glance, this looks to be the clash that beats all clashes. Why, though? Well, just take a look at the acts being put up against one another. On one hand you’ve got viral trap rappers Migos, one to catch live in the Bravo before they inevitably split and go solo. Alongside that, there’s hard rockers The Pretty Reckless, whose frontwoman Taylor Momsen has an absolutely destructive voice and sultry stage presence. That seems tough enough, but then you throw in London’s superbly camp and chaotic HMLTD, a band whose live show can’t be compared to anything else you’ll ever see. Aussie producer Flume tops off the list, bringing his huge production to the Alpha stage. What we’d go for? HMLTD, with a hint of Flume to top it off.

Cypress Hill vs Songhoy Blues vs Car Seat Headrest (Sunday, 17:45-19:10)
The final clash on this list pits acts from three different musical spectrums up and against one another. On the Alpha, you’ve got hip-hop legends Cypress Hill providing Biddinghuizen with some old-school vibes, whereas Songhoy Blues will bring Malian sunshine and blues to the Lima. Car Seat Headrest, on the other hand, tend to leave crowds speechless wherever they go, and Lowlands looks to be no different. Frontman Will Toledo’s new collection of music, Teens of Denial, sounds like the perfect coming-of-age album, and lends itself well to festival stages the world over. Would we go for Toledo on Sunday night, though? Yes, with a smidgen of Cypress Hill to precede that.

Check back soon for a second set of worst clashes. A Campingflight to Lowlands Paradise takes place between 18-20 August in the Dutch municipality of Biddinghuizen. Click here for more information.